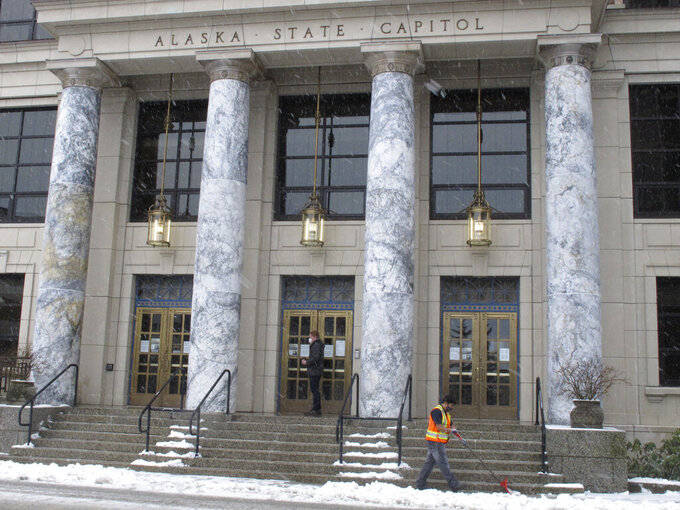 A legislative aide enters the Alaska State Capitol as a worker clears snow from in front of the building on Thursday, Feb. 25, 2021, in Juneau, Alaska. The Alaska House speaker announced on Wednesday, Feb. 24, that a House member had tested positive for COVID-19. (AP Photo/Becky Bohrer)

JUNEAU, Alaska (AP) — The Alaska House canceled most Thursday hearings after a member tested positive for COVID-19, disrupting work that just recently got underway in the chamber after weeks of organizational delays.

The disclosure followed the announcement Wednesday that Gov. Mike Dunleavy had tested positive for COVID-19. Dunleavy was in quarantine at his Wasilla area home with what the state’s chief medical officer said were mild symptoms.

Alaska House Republicans, in a release Thursday, identified the lawmaker as Rep. Mike Cronk of Tok, a member of their caucus. The release states that Cronk is in quarantine in Juneau and experiencing mild symptoms after testing positive Wednesday. It says Cronk's staff had tested negative as of Thursday morning and that contact tracers had begun identifying close contacts of Cronk.

It was not immediately clear where Cronk may have been exposed, said Ben Dietderich, a spokesperson for the House Republicans. He said two other House members who attended a recent event with Cronk outside of Juneau tested negative on Wednesday.

House Speaker Louise Stutes, in an email to fellow representatives Wednesday, announced a member had tested positive. The email did not say when the test was taken or identify the lawmaker.

Protocols in place for access to the Capitol require testing every five days, filling out a health questionnaire for daily access and undergoing a temperature check. Capitol access to the public has been restricted.

Stutes asked that House members and staff come into the Capitol Thursday only if necessary. She said this was to allow for the “appropriate response, contact tracing, and cleaning to occur.”

She said any House member or staff requiring entry into the Capitol on Thursday must be tested Thursday and provide proof of that test.

Stutes said all House committees would be canceled Thursday though the posted schedule showed the House Health and Social Services Committee would meet by teleconference. The meeting topic involved a proposed reorganization of the state health department.

One week ago, on Feb. 18, the House, which has struggled to organize a clear governing majority, set up committees a month into the session. The first House committee meetings began this week.

The Senate pressed on with its work Thursday though “vulnerable staff and legislators” were encouraged to stay home, said Daniel McDonald with the Senate majority press office. Neither the House nor the Senate had planned floor sessions for Thursday.

The Senate earlier this session passed a resolution intended to allow for remote voting if necessary during the COVID-19 pandemic. The House has yet to act on a similar measure.

Jessica Geary, executive director of the Legislative Affairs Agency, said by email that the contractor handling testing and screening for the Legislature is “assisting with disinfection and sanitation protocols” and working with public health officials on contact tracing.

She said there also had been a case in which an aide had tested positive. Geary cited health protocols that state if the person is asymptomatic, “two follow up tests, taken 24 hours apart and producing a negative result, will allow them to be cleared by public health. That is what happened in this instance and there is no relation to the current positive case in the House."

A code of conduct, adopted by the Legislative Council ahead of the session, said legislators and staff must avoid nonessential trips out of Juneau, the capital city. Geary has said it is up to individual legislators to define what is essential travel.

Stutes asked House lawmakers and staff Thursday to not travel outside of Juneau "unless absolutely necessary until further notice.”

The House has considerable work before it, she said. “Further, recent events highlight the likelihood of additional COVID protocol delays and the increased risk of contagion from traveling outside of the Capitol Building bubble,” Stutes said.

She added the House would be working weekends “until our business, the people’s business, is concluded.”

Senate Democratic Leader Tom Begich said he was the only one in his office Thursday afternoon. He said he's asked members of his minority caucus to test before coming into the Capitol, even if they are still within their testing cycle, and said he has been keeping regular contact with House leaders for updates. Begich said he sent staff home when he learned of the House case.

There are mask-wearing requirements in the Capitol, and dividers have been placed between members on the House and Senate floors. But lawmakers often huddle to talk, and seating around committee tables or in committee rooms does not always allow for or encourage spacing.

State health officials have recommended mask wearing, keeping at least 6 feet from others and handwashing as mitigation steps.

Rep. Sara Hannan, a Juneau Democrat, has taken over as chair of the Legislative Council, a committee of House and Senate leaders that handles legislative business. The council met for the first time this session on Thursday, by teleconference.

Hannan, who was working from home Thursday, said she's been asked if protocols would change. She said she thinks the current situation is “a reminder that we're probably not ready to change our protocols, that COVID is actively spreading when mitigation efforts like masking, distancing and handwashing aren't being done fastidiously.”