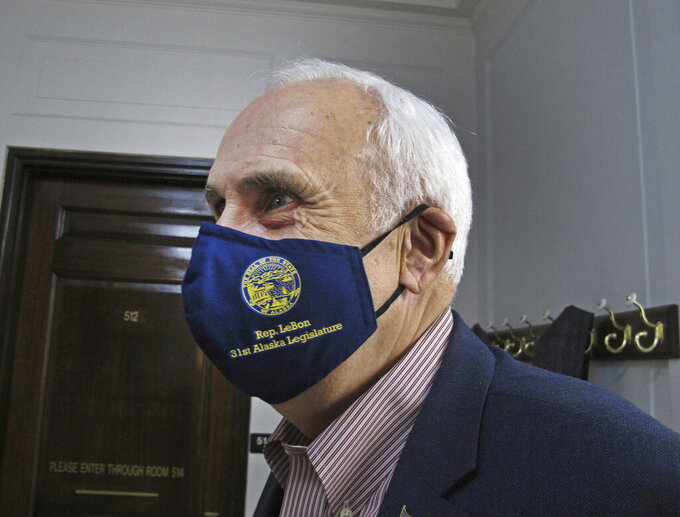 Alaska state Rep. Bart LeBon, a Fairbanks Republican, poses in a mask bearing his name outside a committee room in the state Capitol in Juneau, Alaska, Monday, Jan. 18, 2021. The new Legislature is set to convene on Tuesday, Jan. 19, 2021. (AP Photo/Becky Bohrer)

JUNEAU, Alaska (AP) — Alaska lawmakers convene Tuesday amid economic fallout from the coronavirus pandemic and a near decadelong run of budget deficits. Reserve money is depleted, and tough decisions are ahead on how to use the state's nest-egg oil-wealth fund.

It's unclear who will lead those debates: neither the House nor the Senate has organized majorities. It would be unprecedented for both chambers to start the session without some level of organization, according to legislative librarian Jennifer Fletcher. Majorities control the legislative agenda, and while Republicans outnumber others in both chambers, party often is just one consideration in organizing. Policy positions and personalities factor in, too.

One House Republican, for example, Rep. Louise Stutes, has said she'll stick with members of a bipartisan coalition.

All this comes against the backdrop of COVID-19, which sent lawmakers home early last year. Now, some have gotten the vaccine, the Capitol remains closed to the public and other protections have been taken against the virus. That includes a testing program and an effort to send lawmakers who refuse to wear masks to their offices and deny Capitol access to those who won't get temperature checks and answer screening questions.

“We need to operate safely. But we need to remember that we work for the public, and excluding them from the process, it makes it look like the very thing that the public fears about Juneau: that we're already in a bubble, and now we've formally sealed off that bubble with a series of testing and masking procedures that do not allow public access,” said Sen. Peter Micciche, a Republican from Soldotna.

Legislative hearings will be broadcast on a public affairs network and online, and there are options for public comment as bills move through committees.

Sen. Tom Begich, an Anchorage Democrat, said he’s seen more constituents during the “Zoom era” than before the pandemic. He would like to see masks enforced as rigorously as dress requirements. He said he's been sent to get a tie to attend floor sessions.

The major issues awaiting lawmakers, including the budget and the size of the annual dividend that residents should be paid from the nest-egg Alaska Permanent Fund, are familiar ones that have contributed to drawn-out, contentious sessions in recent years.

Some lawmakers and Republican Gov. Mike Dunleavy say a resolution is needed on the divisive dividend issue. A longstanding formula to calculate checks was last used in 2015, with lawmakers in most years since choosing what to pay.

The Alaska Supreme Court has ruled that dividends must compete for funding like any other state program. Alaska has no statewide sales or income tax.

Permanent fund earnings, once typically used for dividends, have become a vital source of state government funding, surpassing oil revenue. A law seeking to limit withdrawals from earnings has heightened tensions over how much should go to dividends and other state expenses.

Dunleavy ran his 2018 campaign on a so-called full dividend, based on the formula, which he argued should be followed until it's changed. A number of lawmakers agree. Last month, the governor said he would propose a change to the formula that would take effect after this year but wants the public to vote on it.

His budget office called the existing formula volatile and based on “out-of-date accounting and fund management principles.”

Dunleavy has proposed taking $6.3 billion from permanent fund earnings, with roughly half going toward government expenses and the rest to direct payments to residents of about $5,000, as part of a proposal to revive Alaska's pandemic-stunted economy. Some lawmakers agree a stimulus or some kind of aid is in order, but there are concerns about drawing too heavily from the fund.

Sen. Gary Stevens, a Kodiak Republican, said he'd favor more targeted aid to those who need help most. He said he's not sure disbursing super-size dividends is the answer.

About one-fourth of the 40-member state House is new this year, while two of the Senate's 20 members are new.

Micciche said it's not “a great time to be a populist in the Alaska Legislature. We're all going to have to be realists and be honest with the public."

“If you've got legislators that are sort of protective of one type of service or another or just want a full (dividend) without talking about sustainability or are completely resistant to discussions on something like a sales tax, then you have no potential for forward motion,” the Republican senator said. “All of those difficult subjects have to be on the table this year.”

Dunleavy has called for a constitutional amendment requiring Alaskans to vote on new taxes.