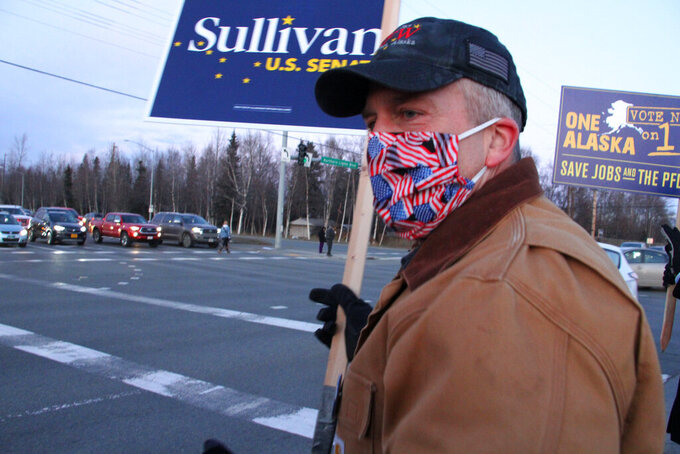 JUNEAU, Alaska (AP) — Republican U.S. Sen. Dan Sullivan expressed confidence in his reelection chances against independent challenger Al Gross Tuesday as Alaska's hard-fought Senate race was too early to call, with thousands of ballots yet to be counted.

“We are on a clear path for a resounding victory for our state and our country because of that positive future that we have laid out,” Sullivan told supporters in Anchorage late Tuesday. “We are going to win. We are going to win big because our best days are ahead of us.”

Fundraising figures through mid-October showed Gross outraising Sullivan in a state that has long leaned Republican. Over the last 40 years, Alaska voters have elected just one Democrat — Mark Begich — to the U.S. Senate. Begich served one term before losing a tight race to Sullivan in 2014, another year in which control of the Senate was on the line. Gross has said he would caucus with Democrats and is the party's nominee.

Sullivan, who waved signs in Anchorage as part of his last get-out-the-vote efforts, in an interview said an early takeaway from reelection wins by colleagues, such as Republican Sens. Lindsey Graham of South Carolina and Joni Ernst of Iowa, “is a theme that I think's going to be the theme of our race, which is, all the money in the world can't buy an election.”

Gross, speaking to supporters, emphasized wanting to ensure all votes are counted. He has said a big part of his campaign involved encouraging Alaskans to vote absentee amid the ongoing COVID-19 pandemic.

“While we don’t have the complete results tonight, we do know this: victory is definitely within our reach,” he said, surrounded by family members in Anchorage. "It is within reach because of the literally tens of thousands of Alaskans who've mailed in their ballots so their voices can be heard. And those votes must be counted.”

As of Tuesday, the Division of Elections said it had so far received about 110,000 absentee ballots, which it has said it plans to begin counting a week after the election. Early in-person votes cast after Oct. 29 also are expected to be counted starting then.

Meanwhile, President Donald Trump, who won the state in 2016, and Democrat Joe Biden were vying for Alaska’s three electoral votes.

Some voters said they wanted change down the ballot; others wanted to keep the current team in place. Others still weren't crazy about their options.

In Juneau, voter Tony Talbot, who said he is a Democrat but leans more independent, said he hoped to see change. “It would be nice to have some civility back in this nation,” he said. “I'd like to see this general idea of people being able to agree to disagree without fearmongering and hatefulness.”

In the Senate race, he said he voted for Gross. “It's been so long with what we've had. It was nice to have new views. It almost didn't matter who it was. I mean it does, but," he said.

Kenny Skaflestad, a Republican from Hoonah, a small community about 40 air miles from Juneau, said he voted for Sullivan. Skaflestad said he knows and respects Gross, who grew up in southeast Alaska, and Gross was once his doctor.

“So there was some decision-making there as I looked at things,” he said. But he said his choice of Sullivan came from his “core beliefs.”

“My vote pursued my yearning for Alaska to be on a prosperous and forward and honest path,” said Skaflestad, who is also running for a state House seat.

Sullivan sought to paint Gross as a liberal who would empower Democrats who have an “anti-Alaska agenda,” such as shutting down the Arctic National Wildlife Refuge to oil and gas drilling. Sullivan defended the Trump administration as delivering for Alaska on issues such as energy and investments in the military and rural law enforcement.

Gross, who said he supports drilling in the refuge’s coastal plain, cast Sullivan, a Marine Corps reservist, as timid and a “puppet” for Trump. An orthopedic surgeon, Gross said he supports a public option for individuals and small businesses on the health insurance exchange.

Sullivan accused Gross of getting rich off Alaskans as a doctor and said Gross had “no credibility” on health care issues. Gross has said he left his full-time practice in 2013 and increasingly got involved in health care advocacy.