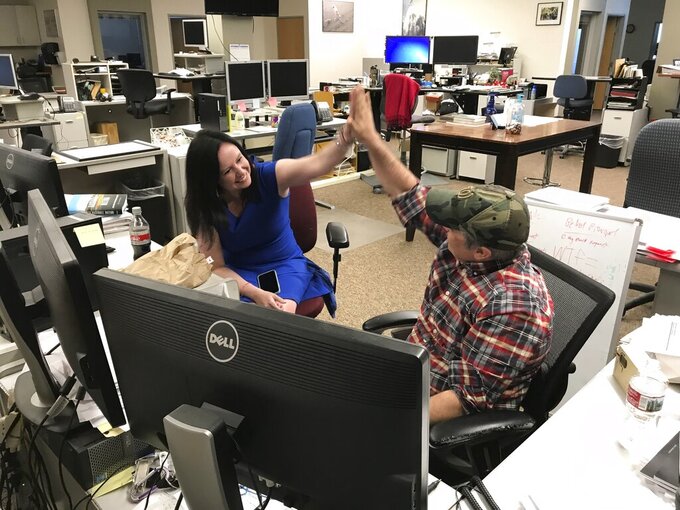 JUNEAU, Alaska (AP) — Alaska's largest newspaper won a Pulitzer Prize in public service Monday for its work examining law enforcement in rural communities, a feat coming less than three years after the outlet was rescued from the brink of financial collapse.

This is the third such award won by the Anchorage Daily News. The award announced Monday was won in collaboration with ProPublica for "a riveting series that revealed a third of Alaska’s villages had no police protection, took authorities to task for decades of neglect, and spurred an influx of money and legislative changes,” according to the announcement.

Anchorage Daily News Editor David Hulen said the series “called attention to some really serious problems in Alaska that have needed attention for a long time.”

“There’s more to be done,” he said. “We’re going to continue working on this.”

Anchorage Daily News President and CEO Ryan Binkley said the announcement was watched by staff via video conference, a nod to the fact that many are working remotely due to coronavirus concerns.

“This should be a time of being with each other in person and popping champagne corks, and of course we can't do that these days,” he said, adding later: “We’ve just been receiving all sorts of congratulations from around the country today, which is kind of surreal, actually, considering where we were three years ago.”

Alice Rogoff backed the online Alaska Dispatch before buying in 2014 the Anchorage Daily News, which was rebranded as the Alaska Dispatch News. In 2017, it filed for Chapter 11 bankruptcy protection.

A federal bankruptcy judge in September 2017 approved its sale for $1 million, calling it a better option than liquidation. Binkley, his two brothers and his sister became the new owners. The name was changed back to the Anchorage Daily News.

“We came very close to not existing after the newspaper went into Chapter 11, but it never stopped,” Hulen said of the outlet's work.

He said the newsroom's size is much smaller than it was at its peak and the paper has found ways to adapt, including forging partnerships like the one with ProPublica.

He said the Anchorage Daily News would not have been able to pull off the depth of reporting in the Pulitzer-winning series had it not been for that partnership.