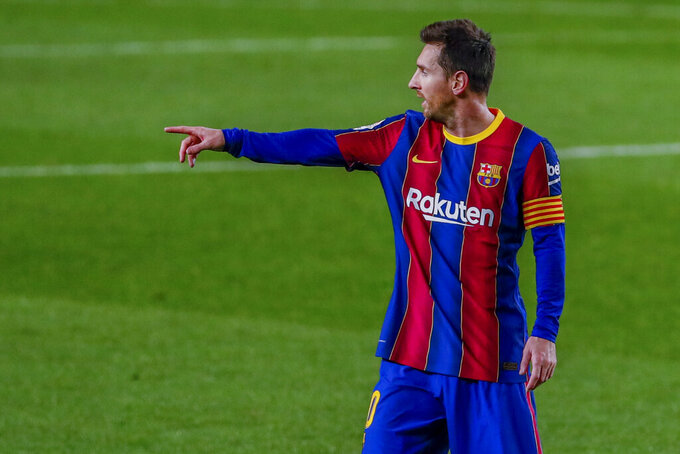 BARCELONA, Spain (AP) — Barcelona defender Jordi Alba scored one goal and set up another to spark a 2-1 comeback victory over Real Sociedad, depriving the Basque Country side of the Spanish league lead on Wednesday.

Alba canceled out Willian José’s opener by curling in a strike in the 32nd minute. The left back then helped the hosts take the lead a minute before halftime when he crossed for Frenkie de Jong to score.

The result shuffled the order of Sociedad, Atlético Madrid and Real Madrid, all level on points at the top of the table and separated only by goal difference. Atlético is now in first place, Sociedad in second, and Madrid in third.

The win by Barcelona boosted its chances of joining the tightly-contest title race. Lionel Messi’s team climbed into fifth place, six points adrift the front-runners. Atlético has three games in hand, Barcelona two, and Madrid one, in respect to Sociedad.

“I think this was our best game of the season,” Alba said. “It is tough to play without fans (due to COVID-19 restrictions), but playing against a great team was more than enough motivation. Our attitude tonight was great. We saw a Barça that fought for each ball like it was our last.”

While contributing as Barcelona's main playmaker, Messi was unable to seriously threaten to score and twice failed to find teammates on promising counterattacks.

Yet the team maintained its intense pressure on defense well up the pitch and moved the ball quickly in attack to keep creating chances.

“The attitude of our team was very good, especially when we did not have the ball. The team made a gigantic step forward as far as pressuring to recover possession,” Barcelona coach Ronald Koeman said. “This is the game we want to play. This is the team I want to see. Every player did their part.”

Koeman may have also found a new combination for the heart of defense with Gerard Pique out injured. Koeman rested centerback Clement Lenglet and opted to align an inexperienced pair of central defenders with Ronald Araújo and Óscar Mingueza. They both performed well against one of the fastest and most talented attacks in the league.

Their only error came late in the match when Mingueza failed to intercept a long ball for substitute striker Alexander Isak, but Pedro “Pedri” González raced back to block his shot before he slammed into the goal post. Pedri was substituted after the hard knock but walked off the pitch.

Yet with Spain midfielder Mikel Merino directing its attack, Sociedad still had more than enough talent to deploy an attractive attack that has made it a potential title contender.

Willian Jose culminated a well-executed set piece to open the scoring in the 28th. Robin Le Normand played Cristian “Portu” Portugués clear into the area, where he squared the ball for the Brazilian striker to tap home.

Alba responded with a precise, right-footed strike after Pedri redirected a pass from Griezmann to him near the edge of the box.

Barcelona kept pressing for the go-ahead goal, which Alba set up when he sent in a low cross that took a slight deflection off a defender before reaching De Jong.

Sociedad rallied late and forced Barcelona to rely on Marc-Andre ter Stegen to protect its advantage. The German got low to make back-to-back saves to deny Willian José and Isak with five minutes left.

“It has been a long, long time since we have seen a Barcelona playing with that level of aggressiveness, and that speaks for the respect that they have for us,” Sociedad coach Imanol Alguacil. “We were not as clinical as we had to be. We have to convert our chances.”

Valencia needed extra time to prevail 4-2 at Terrassa in the first round of the Copa del Rey with teams from the topflight.