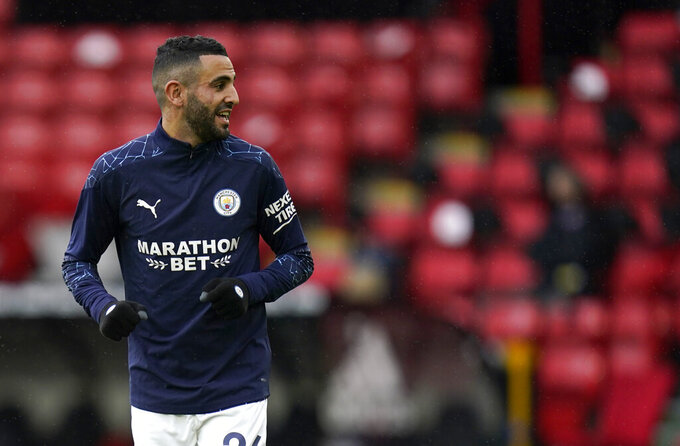 CAPE TOWN, South Africa (AP) — Algeria qualified for the African Cup of Nations in 2022 and will get the chance to defend its title at the delayed tournament despite letting a two-goal lead slip in Zimbabwe and drawing 2-2 on Monday.

The point was still enough to see the African champion through to the finals in Cameroon, which were meant to be played in January and February but were rescheduled to early 2022 — the same year as the World Cup — because of the coronavirus pandemic.

Algeria scored twice in four minutes near the end of the first half in Harare through an Andy Delort header from a free kick and Riyad Mahrez’s skillful finish.

Knowledge Musona curled in a free kick two minutes before halftime and moments after crashing one against the crossbar to pull one back for Zimbabwe. Substitute Prince Dube scrambled home an equalizer with eight minutes to go.

Still, Mahrez and Algeria went through with two games to spare after three wins and a draw in the final group stage of qualifying.

They followed hot on the heels of Sadio Mane's Senegal, which was the first team to qualify on Sunday. That means the teams that played in the last African Cup final in Egypt are the first through to the 2022 edition.

Zimbabwe is second in Group H and in position for the group's other qualifying place.

Africa will have played seven straight days of qualifiers by the time the two rounds of matches wrap up on Tuesday and it has gone relatively smoothly despite the threat of the virus.

There have been only a few high-profile complications. Egypt’s star forward, Mohamed Salah, is spending the international window in self-isolation after testing positive for the virus on the eve of his team’s 1-0 win over Togo in Cairo on Saturday. He missed that win and is also out of the trip to Togo for the return game.

On Monday, the Egyptian Football Association said Arsenal's Mohamed Elneny had also tested positive for the virus after the squad arrived in Togo. He will head back to Egypt and be tested again when he arrives home, the EFA said in a Facebook post. Elneny didn't have any symptoms, the EFA said.

In other games, South Africa secured an important win over Sao Tome and Principe in Group C even though Bafana Bafana was unconvincing against a team that has lost all four of its group stage qualifiers.

Midfielder Jocy gave Sao Tome and Principe a shock early lead in Port Elizabeth, South Africa, and the underdogs were holding the South Africans to 2-2 with three minutes left until Themba Zwane and Percy Tau scored in the 87th and 88th minutes to complete a brace for both of them and take South Africa to a flattering 4-2 win.

Ghana and South Africa are level on nine points at the top of the group but Ghana has played a game less and will qualify for the finals with a win in Sudan on Tuesday.

Other teams on the verge of qualifying with two games to spare are Mali and Tunisia, while Nigeria has some pride to regain after a staggering collapse at home to Sierra Leone last week in Group L.

The Super Eagles led that game 4-0 after 29 minutes but drew 4-4 after Sierra Leone's epic fightback capped by three goals in the last 18 minutes. Forward Alhaji Kamara scored two of them. The rematch is in Freetown on Tuesday.