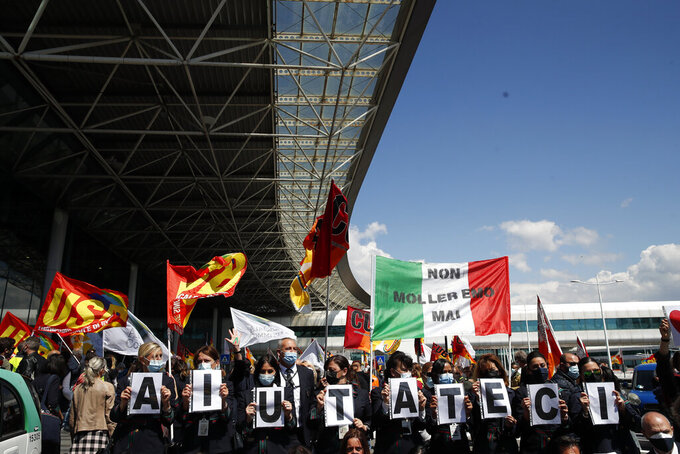 Alitalia workers hold letters to compose the Italian word for " Help Us ", as they stage a protest at the Rome Leonardo da Vinci airport as unions are discussing with the government the future to relaunch the Italian airline carrier Alitalia, Friday, April 23, 2021. (AP Photo/Alessandra Tarantino)

ROME (AP) — Hundreds of workers from Italian airline Alitalia protested outside Rome’s international airport Friday during a four-hour strike against what they see as plans to destroy the long-struggling carrier.

The Italian government is negotiating with the European Union on what aid it can provide loss-making Alitalia and is running up against stiff demands for “economic discontinuity” as the government creates a trimmed down new company to replace the bankrupt entity.

The EU's conditions include demands to stop using the Alitalia name, give up slots at Milan’s Linate airport and sell off the luggage handling and maintenance parts of the business to third parties to concentrate on aviation, according to Italian media reports.

The new company, currently dubbed ITA, that emerges is likely to be radically smaller, both in terms of aircraft and employees.

“We have become a symbol this country, a symbol of the sovereignty and independence of this nation,” he said.

Alitalia workers have been demonstrating for weeks around Italy, pointing to state aid that national governments provided to other European carriers that have suffered losses due to the coronavirus pandemic. The strike Friday forced the cancellation of 40 flights, according to Alitalia’s website.

Alitalia has been under receivership since 2017 and kept afloat with more than 5 billion euros in public money. The Italian government this week approved an advance of 50 million euros to cover workers' salaries for April, part of an aid package designed to cover revenue lost during the pandemic.

Premier Mario Draghi has expressed a fondness for Alitalia, saying he has flown with the airline almost exclusively for decades, but said the company must be restructured so it can “fly on its own wings.”