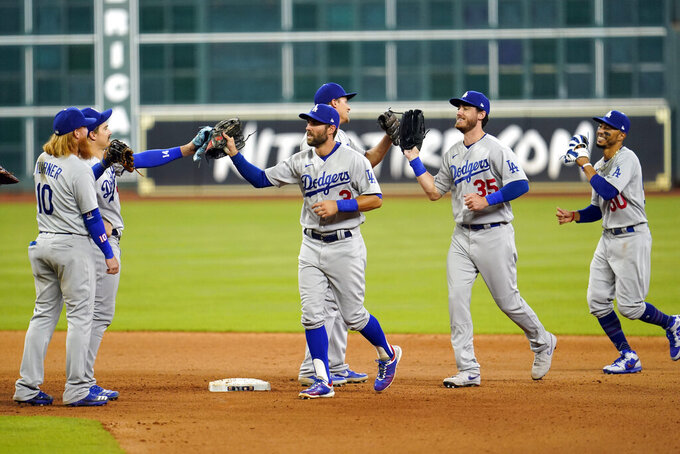 HOUSTON (AP) — After a testy, noisy game in the series opener, all was quiet between the Los Angeles Dodgers and Houston Astros on Wednesday night.

Until the loud crack of Edwin Ríos' bat for a two-run homer in the 13th inning lifted the Dodgers to a 4-2 victory.

The teams showed no carry-over from a fracas the previous evening.

“Just playing those guys and everything that went on, obviously there’s a little edge," Rios said.

No pitches were thrown above or behind any batters, nobody made any ugly faces and everyone remained in their respective dugouts, even as the game became the longest one so far in this pandemic-shortened season.

Rios took Cy Sneed (0-1) deep for a leadoff homer — it was a two-run drive under the new extra-innings rule that starts with an automatic runner on second base.

The Dodgers played without manager Dave Roberts, suspended one game for his part in Tuesday night's heated matchup that saw the dugouts clear. Bench coach Bob Geren managed the team in Roberts’ absence.

Los Angeles used nine pitchers, but not Joe Kelly. The reliever was suspended for eight games by Major League Baseball after buzzing a fastball behind the head of Alex Bregman, then striking out Carlos Correa and mockingly taunting him by sticking out his tongue and pouting his bottom lip.

Kelly elected to appeal and can continue to play until the process is complete.

The Dodgers won both games in Houston in the first meeting between these teams since it was revealed the Astros stole signs en route to beating Los Angeles for the 2017 World Series title.

“You can tell with the morale in the dugout, everyone was more locked in and wanted to be out there," LA starter Dustin May said. “We played well in both games."

Both teams scored a run in the second inning and nobody scored again until an RBI double by Mookie Betts with two outs in the Dodgers 11th.

Correa tied it again with an RBI single with no outs in the bottom of the 11th.

Kiké Hernández started the 13th on second per the new extra-inning rules before Ríos got his first hit of the season after entering as a pinch-hitter in the 11th.

“We had a number of opportunties," Houston manager Dusty Baker said after his team left 15 on base. “We just couldn’t push the run across."

Cristian Javier gave a strong — and much-needed — performance in his first major league start for a Houston rotation that is without ace Justin Verlander indefinitely. The 23-year-old, who was Houston’s minor league pitcher of the year last season, allowed two hits and one run with eight strikeouts in 5 2/3 innings.

“Javier was outstanding," Baker said. “He had great composure and control."

Corey Seager homered to the seats in right field with one out in the second to give LA a 1-0 lead.

Michael Brantley opened Houston’s second with a ground-rule double and scored on an infield single by Myles Straw with two outs.

Dodgers: Ace Clayton Kershaw (back stiffness) won’t start on Friday, but will throw a bullpen session on Thursday, and Roberts said he expects him to pitch on before this road trip ends. The Dodgers play four games at Arizona starting Thursday and wrap up the road trip with a three-game series at San Diego.

Dodgers: Right-hander Ross Stripling (1-0, 1.29 ERA) will start for LA on Thursday night in the opener against the Diamondbacks. Stripling allowed four hits and one run with seven strikeouts in seven innings in a win over the Giants on Friday.

Astros: Houston is off on Thursday before opening a three-game series at the Angels on Friday night with right-hander Lance McCullers Jr. (1-0, 3.00) on the mound. McCullers yielded five hits and two runs while striking out six in six innings of a 7-2 win over the Mariners on Saturday in his return after missing last season recovering from Tommy John surgery.