Allies call on Slovak leader to resign over Russian vaccine 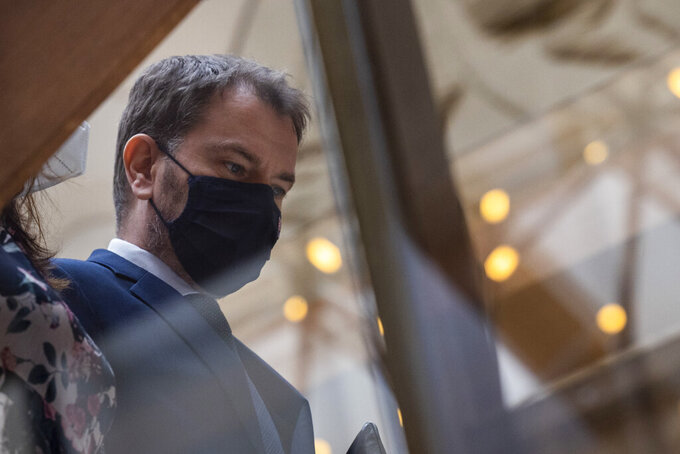 PRAGUE (AP) — Two parties in Slovakia’s ruling coalition called on the populist prime minister to resign to open the way for a reconstruction of the government amid a political crisis triggered by a secret deal to buy Russia's coronavirus vaccine.

Richard Sulik, the head of the Freedom and Solidarity party and a deputy prime minister, said Prime Minister Igor Matovic’s resignation is a “necessary” step for the four-party coalition to survive.

“If he doesn't resign, we're ready to leave the government,” Sulik, who is also the economy minister, said. He gave Matovic a March 23 deadline to step down.

Sulik's party was joined on Monday by the For People party, another coalition party, in demands that Matovic resign.

Sulik and Matovic had clashed repeatedly over how to tackle the pandemic, but the current crisis is the most serious the one-year-old coalition has faced.

Sulik said Matovic's resignation would create space for a more constructive and effective cooperation in the coalition. He also said he would be willing to offer his own resignation to give the coalition a fresh start.

There was no immediate response from Matovic to the demands.

The crisis erupted when a secret deal came to light two weeks ago involving Slovakia's agreement to acquire Russia’s Sputnik V coronavirus vaccine. The deal was orchestrated by Matovic despite disagreement among his coalition partners.

Matovic has defended the deal to buy 2 million Sputnik V vaccines, saying it will speed up the country's vaccination program.

Among those who opposed it was Foreign Minister Ivan Korcok, who was nominated to the post by Sulik’s party. He argued that the vaccine was a tool in Russia’s hybrid war against the West. Korcok said the purchase cast doubts on his country’s clear pro-Western orientation.

Another coalition partner, For People, was also angry, arguing that any vaccine needs approval from the EU’s drug regulator, which has not happened with Sputnik V.

For People leader Veronika Remisova said that Sulik should resign together with Matovic as a way out of the crisis.

“Their conflicts effectively slowed down the government’s work,” said Remisova, who is the deputy prime minister for investments and informatization.

If Matovic refuses to resign and the Freedom and Solidarity and For People leave the government, the remaining two parties would lose their majority in Parliament.

Sulik also said he believed that Matovic’s handling of the coronavirus pandemic has been chaotic, making Slovakia one of the hardest-hit countries in the European Union.