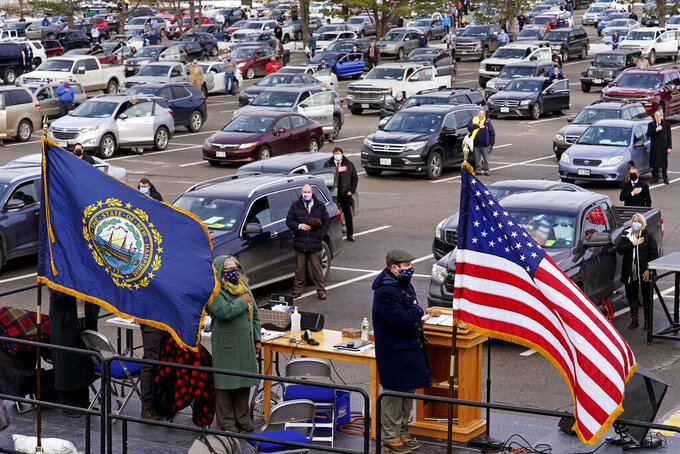 DURHAM, N.H. (AP) — Bumper-to-bumper parking replaced the usual shoulder-to-shoulder seating for the New Hampshire House of Representatives on Wednesday as one of the world’s largest legislative bodies convened from the socially distant confines of their cars instead of the Statehouse.

“This is my first term, I’ve never been a representative and I’ve not been to the Statehouse yet actually,” said Rep. Melissa Blasek, R-Merrimack. “We were sworn in on the field over there, and now we’re out here in a parking lot.”

More than 350 of the 400 members attended the unusual session, which was held in a parking lot at the University of New Hampshire, led by the clerk and newly elected Speaker Sherm Packard from a heated stage, and broadcast on a 16-foot screen and over the radio.

Microphones were brought to car windows for questions and debate, and voting was conducted via wireless devices that proved to be a bit temperamental. Some lawmakers had to hold theirs out their windows or step outside to have their votes recorded.

“If you’re having trouble with voting, please put on your hazard lights,” said House Clerk Paul Smith, who later admonished, “The House shall be in order!” when lawmakers honked their horns to celebrate Packard’s election.

“It’s about what one would expect if you decided to hold a legislative session in a parking lot in January adjacent to a railroad track with 400 reps driving around in their cars and figuring out how to listen remotely, find the right radio station and push buttons so their vote is counted,” said Rep. Renny Cushing of Hampton, the Democratic minority leader.

“I would hope that people would come to recognize that this is a one-off, interesting folly perhaps, but if we’re serious about doing the people’s business of the state, then we need to vote remotely,” he said.

In the afternoon, as word spread that supporters of President Donald Trump had breached security perimeters and entered the U.S. Capitol, the New Hampshire House passed a hastily drafted resolution condemning the violence. Packard asked lawmakers to honk their horns or flash their lights to vote yes.

“I will take that as a unanimous vote,” he said after about 20 seconds of sustained honking.

Since the coronavirus pandemic began, the House has met both indoors in an ice arena and outside on an athletic field at the University of New Hampshire.

But after House Speaker Dick Hinch, R-Merrimack, died of COVID-19 a week after being sworn in during the Dec. 2 outdoor gathering, Republican House leaders scheduled a drive-in movie style session to elect his replacement and adopt rules for the next two years.

The 24-member Senate also convened Wednesday, but in a fully remote session that wrapped up before the House even got going.

House Democrats had pushed for the same, but Packard, R-Londonderry, said that wasn’t possible because the House hadn’t adopted rules to allow remote sessions. Members later voted 187-149 against doing so.

Republicans won control of both chambers of the Legislature in November. Several GOP House members tested positive for the virus after attending an indoor caucus meeting Nov. 20 where many attendees weren’t wearing masks.

Dozens of them refused to wear masks at the Dec. 2 outdoor session a week before Hinch’s death. The new speaker said he knew his predecessor was watching Wednesday’s session from above.

“Dick was like a brother to me, and I wish I had had more time to mourn for him, but the business of the state had to move forward,” Packard said.

Rep. Jeannine Notter, R-Merrimack, broke into tears when asked by a reporter about how she had prepared for the session, given that temperatures were in the mid-30s. She unzipped her bright red parka to reveal a black blouse and blazer, and a pin that belonged to Hinch.

“I’m wearing black underneath. I’m dressed professionally because I’m mourning Dick Hinch,” she said. “I’m just overcome with emotion and I just hope that we don’t do anything to embarrass him.”

She also wore a mask featuring images of the U.S. Constitution and flag, but said — in a departure from the advice of medical professionals — that she thinks masks are “full of germs” and isn’t afraid of the virus.

Blasek, her newly elected colleague, said she would have preferred to meet at the Statehouse.

Legislators were greeted by a handful of protesters who felt the session has failed to reasonably accommodate members with disabilities. One sign read that drive-ins are for movies and making out, “NOT for the NH State Legislature!”