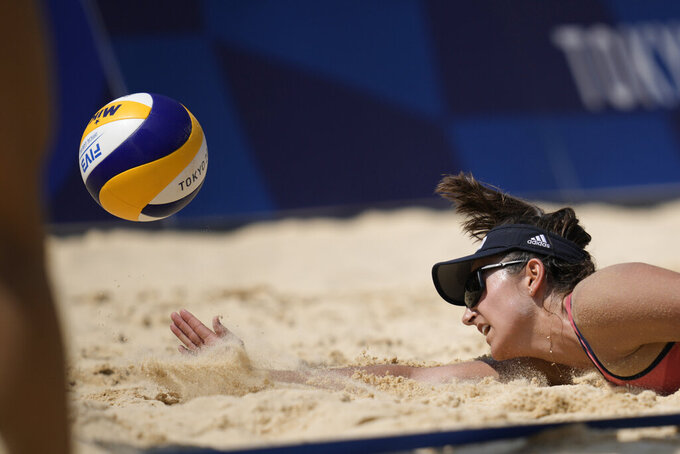 Sarah Sponcil, of the United States, dives for the ball during a women's beach volleyball match against Canada at the 2020 Summer Olympics, Sunday, Aug. 1, 2021, in Tokyo, Japan. (AP Photo/Felipe Dana)

That didn’t make any sense.

And the Americans' survival was riding on it.

“I think they’re just sort of working out some kinks,” said Bansley, a two-time Olympian who is paired with Brandie Wilkerson in Tokyo. “We trust the technology they have. At least you know the correct answer, and you work from there.”

After losing the first set and falling behind 10-4 in the second, the Canadians rallied to force a tiebreaking third set, first to 15 (must win by two points). They led 12-11 when Sponcil’s serve went past them and bounced off the sand.

The linesman’s ruling was that the ball was out, but the Americans challenged the call, using a system that was used in the Olympics for the first time in Rio de Janeiro. The close-up, slow motion replay on the stadium video board showed the ball had clearly missed the blue tape that signifies the court boundary.

But somewhere in the process of getting that information to the court, there was a glitch: The video board said the ball was out and the challenge was successful, which isn’t possible. A member of the Canadian delegation sitting in the mostly empty arena shouted, “It was out!”

The players complained to the referee, and the stadium announcer explained that the challenge would be reviewed again. The call was corrected, and instead of a 12-12 tie it was 13-11, with Canada leading.

Claes said she's never seen that before. (A team cannot appeal the decision in a challenge, but in this case the problem arose in communicating the decision to the players.)

“I thought it was in, and I mean, it sucks,” she said, noting that they blew a 10-4 lead in the second set. "It shouldn’t have even come down to that third set. We did such a good job in the second, and then just let them back in.”

Wilkerson, a first-time Olympian, knocked down a pass that got too close to the net for a triple set point, and they won it when she hit it over on the second shot to a wide open part of the court.

That ended the stay of Claes, 25, and Sponcil, 24 — the youngest American team ever to qualify for the Olympic beach volleyball tournament. They are both two-time NCAA champions — at UCLA and Southern California, respectively — and the first Olympians to come up through a U.S. college beach volleyball program that started in 2012.

They entered the games as the No. 3 ranked team in the world and certainly the hottest, winning the last two events of the pandemic-extended qualifying period to grab the second U.S. spot in Tokyo. In the process, they knocked out five-time Olympian Kerri Walsh Jennings.

And they would still be younger for the 2024 Paris Games than any the other American beach volleyball players in Tokyo are now.

“Huge learning moment for us," Claes said. "It sucks right now. It’s probably going to suck for a few weeks. But probably looking back I’ll for sure look at that and take that into account. But right now, like, it stinks."

In other round of 16 action on Sunday, the Brazilian team of Ana Patricia and Rebecca beat Wang Fan and Xia Xinyi of China. American pair Phil Dalhausser and Nick Lucena were set to meet Qatar in the afternoon.