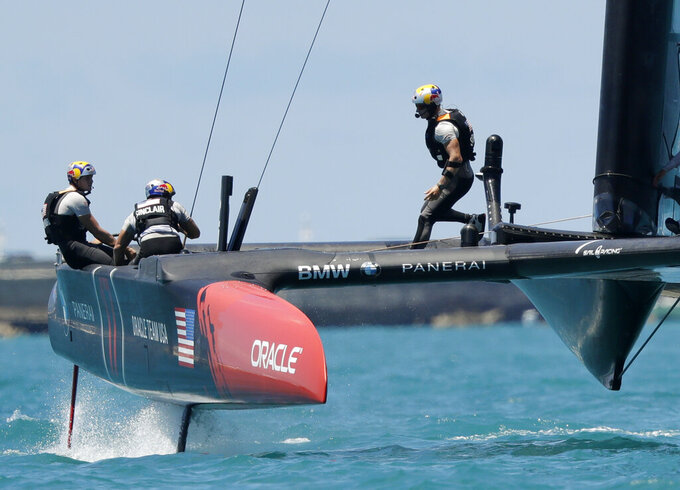 FILE - In this Sunday, June 25, 2017, file photo, Oracle Team USA skipper and helmsman Jimmy Spithill, right, crosses the boat during the eighth race of America's Cup sailing competition against Emirates Team New Zealand, in Hamilton, Bermuda. Spithill has signed on as CEO and helmsman of the United States team in SailGP, giving the global league another former America's Cup champion in its stable of stars. (AP Photo/Gregory Bull, File)

SAN DIEGO (AP) — Jimmy Spithill has signed on as CEO and helmsman of the U.S. team in SailGP, giving the global league another former America’s Cup champion in its stable of stars.

Spithill is an Australian who sailed in three America’s Cup campaigns for Oracle Team USA, winning the first two. His wife, Jennifer, is from San Diego, where they make their permanent home with their two sons.

With Spithill taking the helm for the American team, Rome Kirby will shift to flight controller aboard the 50-foot foiling catamaran.

The second season of SailGP was delayed from 2020 until 2021 due to the coronavirus pandemic and will start April 24-25 in Bermuda.

That will be a month after the 36th America’s Cup finishes in Auckland, New Zealand. Spithill is competing in his seventh America’s Cup campaign, this time with Italy’s Luna Rossa Prada Pirelli Team.

“I get along well, good mates with both Russell and Larry, and sort of been in touch and watched from afar and was really impressed with what they did in season one,” Spithill said from Auckland. “When the opportunity popped up I jumped at it. I love that style of racing and it’s something I want to be a part of."

Spithill had two memorable America’s Cup victories with Oracle Team USA. As a 30-year-old in 2010, he became the youngest skipper to win the Auld Mug when he steered a 90-foot trimaran to a two-race victory against a Swiss crew in a one-off showdown that was the result of a bitter court fight.

In 2013, he led Oracle Team USA to one of the biggest comebacks in sports. After Oracle fell behind Team New Zealand 8-1, he steered the American boat to eight straight victories on San Francisco Bay.

Also on that Oracle crew were Tom Slingsby, who skippered the Australian SailGP team to victory in the inaugural $1 million, winner-take-all championship in 2019, and Britain’s Sir Ben Ainslie. Ainslie joined SailGP for the second season and dominated the opening regatta in Sydney in late February, but that regatta was declared void after the season was postponed by the pandemic.

Ainslie is leading INEOS Team UK in the America’s Cup.

“I’m thankful for the opportunity to get back out there and go against, let’s face it, the best guys in the world,” the 41-year-old Spithill said.

Peter Burling and Blair Tuke announced earlier this year they will head a New Zealand team in SailGP. They led Emirates Team New Zealand to victory against Spithill and Oracle Team USA in the 2017 America’s Cup and look to defend the oldest trophy in international sports in March. Burling and Tuke are also Olympic gold and silver medalists.

“It’s going to be awesome, the rivalries in a whole lot of different ways, and just knowing how competitive a lot of these individuals are and what’s at stake,” Spithill said. “Oh, mate, I just can’t wait for that first event coming up in Bermuda. We’re living in a different world now, obviously, but it’s just cool to see that this event is going ahead next year.”

Spithill “was keen to join the fray,” Coutts said from New Zealand. “A guy like Jimmy wants to race against the best in the world and it’s pretty clear that we now have the world’s best sailors committing to SailGP. It’s going to be a fantastic lineup.”

The first season was dominated by Slingsby and fellow Aussie Nathan Outteridge, who skippers Team Japan.

The United States had the youngest team in SailGP’s inaugural season and finished last out of six teams.

“This is going to be an incredibly competitive championship," Coutts said. "The U.S. didn’t perform as well as it could, but I think overall Rome did a really good job with that team and he’s still going to be involved. I think there’s no respect lost from Rome. He did a good job but there’s no question Jimmy Spithill is going to ramp things up."

Kirby also was on the winning Oracle Team USA crew in the 2013 America’s Cup.