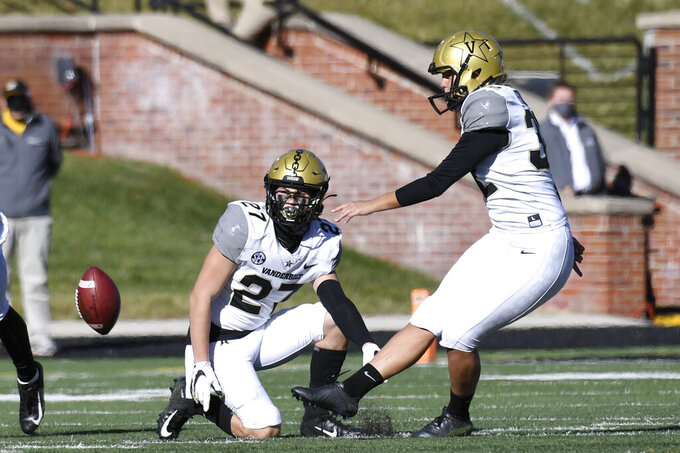 FILE - In this Nov. 28, 2020, file photo, Vanderbilt's Sarah Fuller, right, kicks off as Ryan McCord (27) holds to start the second half of an NCAA college football game against Missouri in Columbia, Mo. With the kick, Fuller became the first female to play in a Southeastern Conference football game. (AP Photo/L.G. Patterson, File)

Sarah Fuller was a goalie on the Vanderbilt women's soccer team when a chance at history tapped her on the shoulder.

The Commodores football team was down a kicker because of COVID-19 issues, so coach Derek Mason reached out to soccer coach Darren Ambrose to see if Fuller might be a good option.

Turns out she was.

Fuller, a senior, became the first woman to play in a Power 5 football game with a kickoff against Missouri on Nov. 28. Two weeks later, she made history again as the first to score with two extra points against Tennessee.

Fuller's uniform was sent to the College Football Hall of Fame. Her gender-breaking accomplishment was a glimmer of inspiration amid the darkness of a pandemic.

“This whole time has been if I can do it, if I’m good enough to do it,” Fuller said. “It wasn’t if I was a girl or not. So that’s something I’ve really appreciated. At the end of the day, they treated me like an athlete and that’s the best I could ask for.”

A pandemic turned the 2020 sports year into one of the strangest, filled with shutdowns, cancellations, infections and quarantines.

But sports can inspire even in the bleakest of times. And 2020, despite all the hardships and heartbreak, was filled with such moments.

The Kansas City Chiefs created one before the shutdowns began, winning their first Super Bowl title in 50 years behind what-will-he-do-next quarterback Patrick Mahomes.

Another long drought ended when Liverpool won the Premier League for its first English championship in 30 years.

The Los Angeles Dodgers kept the trend going at the end of a pandemic-shortened baseball season, earning their first World Series title since 1988.

“We never stopped," World Series MVP Corey Seager said. "We were ready to go as soon as the bell was called and once it did, we kept rolling.”

The NHL and NBA stopped then started again in a most pandemic way: in bubbles.

The Tampa Bay Lightning made the most of their two-month stay in Edmonton, winning the franchise's second Stanley Cup (with 2004) by beating the Dallas Stars in six games.

The Los Angeles Lakers started 2020 in mourning after Kobe Bryant, his 13-year-old daughter and six others died in a helicopter crash.

The Lakers honored the former star and Hall of Famer the best way they could, winning the franchise's record-tying 17th championship — the first since Kobe won his fifth in 2009 — by beating the Miami Heat in six games.

“All we wanted was to do it for him,” Lakers big man Anthony Davis said. “I know he’s looking down on us, proud of us.”

Lewis Hamilton made some of his own history in 2020, racing to his seventh Formula One title to match Michael Schmacher's career mark.

Denny Hamlin kicked off the pre-pandemic NASCAR season by becoming the fourth driver to win the Daytona 500 in consecutive years. Popular driver Chase Elliott capped the shortened season by winning his first Cup Series championship, coming from the back of the field to take the checkered flag in seven-time champion Jimmy Johnson's final race.

“To share a moment like that, Jimmie’s last race, to win and lock the championship, those are moments you can only dream and this is a dream.” said Elliott, who received a big hug from Johnson after his Cup-clinching victory at Phoenix. “Just hoping I don’t ever wake up.”

While the world was waiting to snap out of a pandemic nightmare, Colin Morikawa hit the kind of shot players around the world fantasize about.

In a battle down the stretch at the PGA Championship, the 23-year-old drove the green on the 294-yard par-4 16th hole at Harding Park, made the eagle putt and went on to shoot a final-round 64 for his first major championship.

“The shot on 16 looked like it was out of a video game,” said Cameron Champ, Morikawa's playing partner that August day.

Sophia Popov's run at the Women's Open was like something out of a fairytale.

The German lost 25 pounds because of Lyme disease three years ago and considered giving up her professional career, even working as caddie for a couple of events in 2020. Ranked 304th in the world, she qualified for the Women's Open with a top-10 finish at an LPGA Tour event two weeks earlier and became one of the most unexpected major champions with a sterling four-day run at Royal Troon.

Kim Ng provided a bit of inspiration when named general manager of the Miami Marlins, the first woman to hold the title in any of the major North American sports.

And then there was Chris Nikic.

The 21-year-old struggled to breathe, hurt all over and nearly quit multiple times. Nikic pushed through nearly 17 hours of pain in one of the most difficult races in the world, becoming the first person with Down syndrome to complete the Ironman Triathlon.

“You are an Ironman!” the triathlon tweeted after Nikic's accomplishment.

He also gave sports fans an unforgettable moment in a year no one is soon to forget.