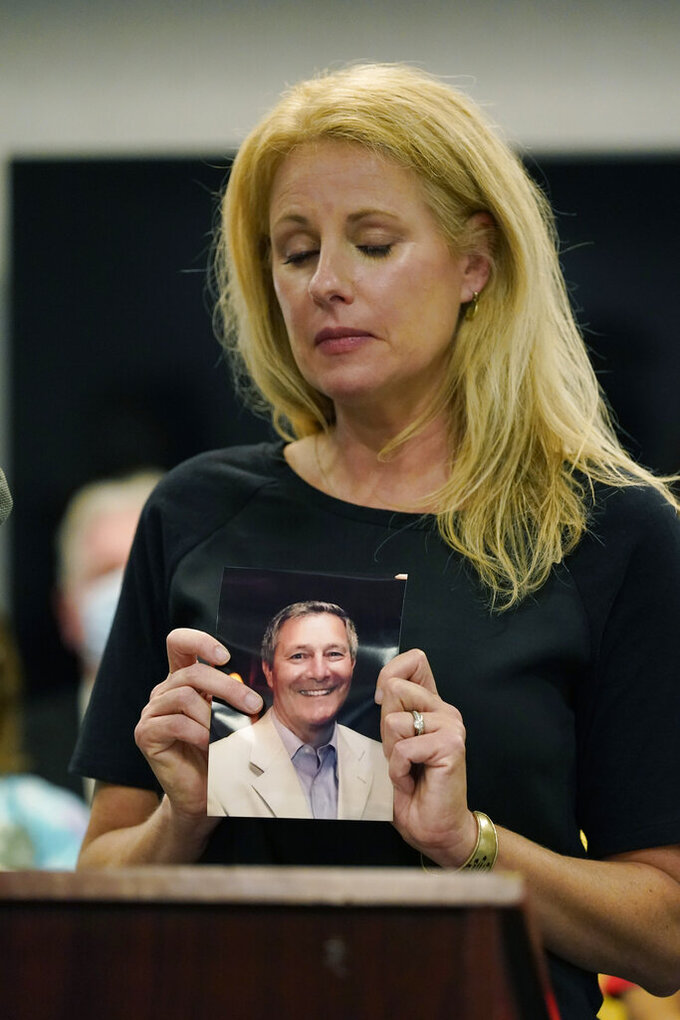 Jacqueline Temple Rudder, pauses as she speaks about how a medical marijuana treatment would have helped her late father-in-law Ed Rudder deal with pancreatic cancer, during an Initiative 65 rally of patients and parents in Ridgeland, Miss., Tuesday, Oct. 27, 2020. Initiative 65 would amend the Mississippi Constitution to allow the prescription by a doctor of up to 5 ounces (142 grams) of marijuana per month for people who suffer from more than 20 medical conditions. The state lawmakers are offering a more restrictive measure as an alternative. (AP Photo/Rogelio V. Solis)

JACKSON, Miss. (AP) — The Mississippi Department of Health has been working around the clock to respond to the coronavirus pandemic. Now, the agency will be responsible for starting a statewide medical marijuana program within the next nine months.

Uncertified election results show 74% of Mississippi voters approved the ballot measure that allows doctors to prescribe up to 5 ounces (142 grams) of marijuana per month for people who have at least one of more than 20 serious medical conditions.

“This vote shows minds are changing," said Jaqueline Temple Rudder, a homemaker from Madison County who lost her father-in-law to cancer and voted for Initiative 65. "We don’t want our sick suffering.”

Both Gov. Tate Reeves and state's top health officer, Dr. Thomas Dobbs, opposed the initiative. Reeves said passage would lead Mississippi to have the “most liberal weed rules” in the country - although it does not legalize recreational marijuana. Dobbs said it would distract health officials who are working furiously to slow the spread of the coronavirus.

Health Department said Wednesday that it is in the “planning stages and reviewing various elements important to creating a successful marijuana program.”

“The Agency will do its best to manage both major (COVID) endeavors,” spokeswoman Liz Sharlot said.

Initiative 65 places specific guidelines into the state constitution for how the medical marijuana program will be run.

Appointments for certification must be done in-person with licensed physicians; treatment cards for patients, which can cost no more than $50, are valid for up to 12 months; medical marijuana can be prescribed for shorter periods or renewed for longer based on physicians' recommendations. Minors can be prescribed marijuana with the consent of a parent or guardian.

The Health Department will not be able to limit the number of treatment centers or set the price of medical marijuana. Treatment centers will be allowed where other commercial businesses are allowed, although not within 500 feet (152.4 meters) of a school, day care or church.

Marijuana sales can be taxed up to the state tax rate of 7%. Proceeds from medical marijuana will go toward funding the program.

Before July 1, the Health Department needs to finalize regulations on advertising, procedures for tracking and labeling marijuana at treatment centers and use of medical marijuana in nursing homes.

Voters chose Initiative 65 over a similar but more restrictive measure designed by lawmakers. Alternative 65A would have left tax rates, possession limits and certain other details to the Legislature and had no start date.

Mary Collins Harwell of Jackson said she supported Initiative 65 because her 13-year-old son has severe autism and cerebral palsy and lives with intense pain that hasn't responded to other treatment.

“Unless you are put in a position in your life where you or somebody you love needs it, you just don't think of marijuana as something that is going to help,” Harwell said. “You think about people sitting around smoking joints. That's not what we're talking about.”

Angie Calhoun of Puckett said her son suffers from chronic conditions such as focal seizures, severe joint pain and nausea. He tried 17 prescriptions before moving to Colorado to try medical marijuana, which finally helped him.

“My son doesn't have to be a medical refugee any longer," she said. “This vote shows that most Mississippians, like us, want help for our sick patients with something that's natural and safe.”

Leah Willingham is a corps member for the Associated Press/Report for America Statehouse News Initiative. Report for America is a nonprofit national service program that places journalists in local newsrooms to report on under-covered issues.