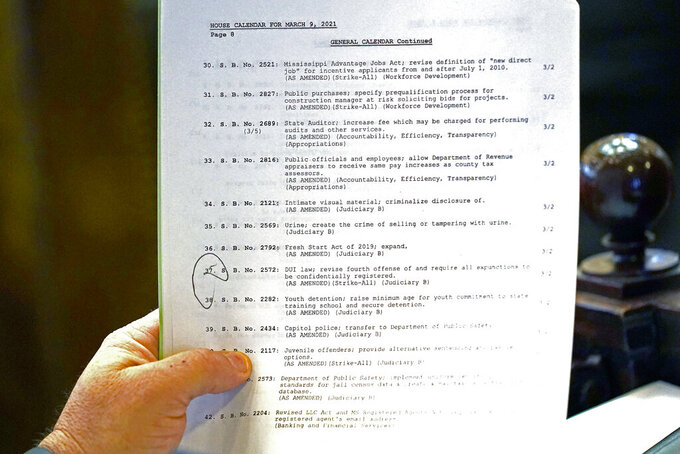 A lawmaker holds a House calendar with proposed legislation listed at the Capitol in Jackson, Miss., Tuesday, March 9, 2021. Lawmakers have a Wednesday deadline for original floor action on general bills and constitutional amendments originating in the other House. (AP Photo/Rogelio V. Solis)

JACKSON, Miss. (AP) — Mississippi legislators are moving into the final weeks of their three-month session, and they still need to make significant decisions about taxes and spending for the year that begins July 1.

A year into the coronavirus pandemic, state health officer Dr. Thomas Dobbs said last week that one of his most important budget requests is for an increase in state money to hire public health nurses. Legislators eliminated about half of those positions in recent years.

“Federal funding's been pretty good for COVID. We just need money to keep the nurses in the clinics out in the field,” Dobbs said. “It's the local folks who are suffering from us not getting enough funding to keep them operational.”

Dobbs said that for the coming year, the state Health Department would like to receive the amount of state money it received during the year that ended June 30, 2020. That would be more than the department was allocated for current fiscal year.

Dobbs said he understands legislators like to keep budgets tight, but the Health Department needs stability.

“We need not only strong centralized public health, but we need strong local public health to track down TB cases, to track down people who have syphilis, to make sure that women have access to ... pap smears and mammograms if they don't have health insurance," Dobbs said. “These nurses who track TB can track COVID. They can give shots.”

Legislators of course will consider spending requests for a wide array of state services. They are considering a teacher pay raise, and the most likely prospect is a plan that would give a $1,000 boost to most teachers and $1,100 to those in the first three years in the classroom. Republican Gov. Tate Reeves has pledged to sign any teacher pay raise that lands on his desk.

Despite the initial economic shock of the pandemic, Mississippi tax collections for the first eight months of the current fiscal year — July through February — were almost 9.5% higher than they were for the same eight months a year earlier. That is an increase of almost $339 million. It includes higher collections from sales taxes; use taxes for online purchases; and taxes on tobacco, beer, wine and hard liquor. The figures could give budget writers a jolt of confidence as they prepare final details of spending plans.

Republican House Speaker Philip Gunn and his allies are pushing a proposal to phase out the state income tax, cut the 7% grocery tax in half, increase the sales tax on most items from 7% to 9.5% and increase many other taxes. The bill passed the House last month and is facing skepticism in the Senate.

President Joe Biden on Thursday signed a $1.9 trillion federal spending plan that includes money for coronavirus response, extended unemployment benefits and many other programs. It was not immediately clear how the infusion of federal money will affect the current state budget writing process.

During a news conference at the Mississippi Capitol on Thursday, Reeves said his staff is reviewing the federal legislation, which he called “a Democrat wish list of spending” and “a blue state bailout.”

Mississippi is one of the poorest states in the nation and has long relied on federal spending, but Reeves did not mention that. Instead, he knocked the federal bill by saying it helps states with higher unemployment rates.

“Mississippi has more people working today than we had a year ago, the day the pandemic hit. It’s because our state has been open to business and our state has not shut down,” said Reeves, who lifted Mississippi’s mask mandate and removed most business restrictions March 3. “They are rewarding those blue states who have shut down their economies by sending them more money than they are otherwise entitled to.”