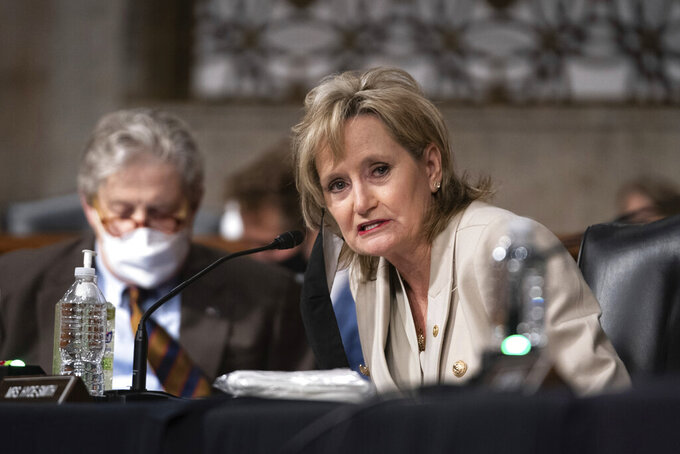 JACKSON, Miss. (AP) — Democratic challenger Mike Espy and Republican incumbent Cindy Hyde-Smith are both receiving help from out-of-state politicians as they compete for a U.S. Senate seat in Mississippi.

Hyde-Smith defeated Espy in a 2018 special election runoff, and now he's trying to reverse that outcome. The previous election was to fill the final two years of a six-year term started by longtime Republican Sen. Thad Cochran. Hyde-Smith was the state agriculture commissioner when she was appointed to serve temporarily when Cochran retired because of health problems in the spring of 2018.

This year's election is for a full six-year term, and Republicans are trying to maintain their Senate majority.

“Cindy Hyde-Smith is one of President Trump’s most ardent supporters in the U.S. Senate. And right now, she is under attack," Republican Sen. Marsha Blackburn of Tennessee says in a short video on Hyde-Smith's campaign website.

“Now, we need your help for Cindy to send her back to the U.S. Senate so that she can be there to defend your freedoms, your liberties and to stand with President Trump,” Blackburn says.

Espy, who is a former congressman and former U.S. agriculture secretary, received campaign help last week from a Democratic former governor of Massachusetts, Deval Patrick, who traveled to Jackson to speak at a luncheon for union members, civil rights activists and others who could be important to turning out the vote for Democrats.

“There’s an unusually clear choice here in Mississippi and across the country, frankly, about whether we’re going to be about yesterday or be about tomorrow," Patrick told The Associated Press in an interview after the event.

Patrick said the coronavirus pandemic has exposed economic fragility and “measures of despair” in the U.S.

That evening, Democratic Sen. Edward Markey of Massachusetts held an online event to promote Espy, with Espy and Patrick appearing together from the campaign office in Mississippi.

Patrick also campaigned for Espy in Mississippi in 2018, as did New Jersey Sen. Cory Booker and California Sen. Kamala Harris, who's now the Democratic nominee for vice president.

If elected, Espy would become Mississippi's first Black U.S. senator since Reconstruction. Hyde-Smith is the only woman to have represented Mississippi in either chamber of Congress.

The same day the Espy campaign announced his Obama endorsement, Hyde-Smith received a tweet of support from Trump, who campaigned for her in Mississippi during the 2018 race.

Republicans hold all statewide offices in Mississippi, and voters in the state last elected a Democrat to the U.S. Senate in 1982, when they sent longtime incumbent John C. Stennis back to Washington for his final term.

Donations flowed to Espy and many other Democratic candidates after the Sept. 18 death of Supreme Court Justice Ruth Bader Ginsburg. Like many in his party, Espy criticized Republicans for moving quickly to fill the Supreme Court vacancy.