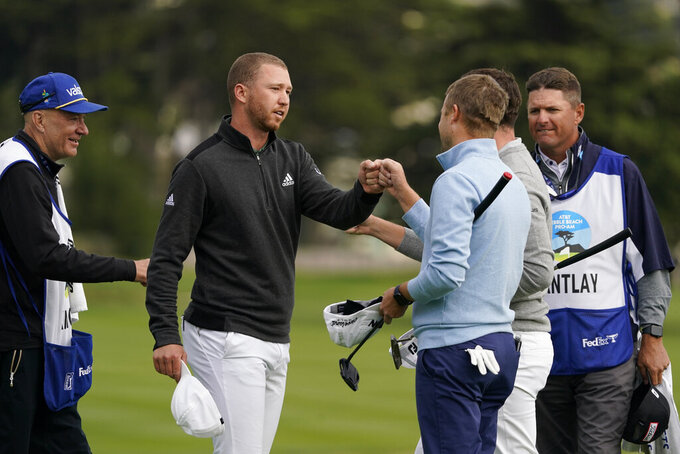 PEBBLE BEACH, Calif. (AP) — Daniel Berger believes he is among the best in golf. At least he stopped short of assigning his own ranking.

He is part of the fabled high school graduating class of 2011, except Berger is often listed in the “other” category. The group includes Jordan Spieth with his three legs of the career Grand Slam among 14 victories worldwide, and Justin Thomas with his 13 worldwide wins and a PGA Championship.

Xander Schauffele was only mentioned after his two-win rookie season included the Tour Championship, and then he backed that up with a World Golf Championships title, seemingly constant appearances near the top of the leaderboard in majors and a world ranking that rarely is out of the top 10.

Berger was not even among the top 100 when golf returned from the COVID-19 pandemic in June. He had changed swing coaches to Cameron McCormick. He was recovering from wrist injuries that left him wondering if he'd ever get back.

And then he won at Colonial in a playoff. He nearly won at Hilton Head. He was runner-up at a World Golf Championship in Memphis, Tennessee, on the TPC Southwind course where he had won twice.

More validation arrived at the AT&T Pebble Beach Pro-Am, a tournament he probably should have been playing more often. He tied for 10th in 2015. He didn't return until last year and tied for fifth (albeit 10 shots behind Nick Taylor).

While his victory Sunday won't go down as the biggest of his four PGA Tour titles by world ranking standards, it might have been the most satisfying the way he won.

Berger lost a share of the lead Saturday on the par-5 18th by flaring his drive out to the right, over a bunker and by inches out-of-bounds, leading to double bogey. He arrived on the 18th hole Sunday in a tie for the lead with Maverick McNealy, who shot 31 on the back nine.

“One of the best finishing holes I've ever played,” Berger said. “Obviously, with everything that happened on Saturday, hitting that ball out-of-bounds, to step up there and hit a great drive and then one of the best 3-woods I've ever hit in my life, and then to make that putt is as good as it gets for me.”

He hit 3-wood from 250 yards to 30 feet, and wanting only to two-putt for the win, watched it dropped for eagle. It was his fourth eagle of the week, tying a record at Pebble since such statistics started being kept in 1983.

That's two victories in his last 16 starts over eight months, and while he only moved up two spots to No. 13 in the world because of the weak field, it's better than when he returned.

And the confidence is not lacking.

“I think today really solidified my position as one of the best golfers out here and I just need to continue to do the things I’ve been doing,” he said. “And I feel like there’s no, there’s no limit to what I can accomplish.”

Patrick Reed still gets a hard time for saying he felt he was one of the top-5 players after his victory at Doral in a World Golf Championship in 2014. Reed meant that as an adjective, and when chatting about it at the start of the year, pointed out that he had three wins in his last 14 starts. During that stretch, he couldn't think of many better.

Berger was thinking more about the “now” and how much better he could get.

It was six years ago during a practice round at the Valspar Championship that four players from that class of ‘11 were together — Spieth, Thomas, Berger and Ollie Schniederjans, who still hasn’t won and no longer has a PGA Tour card. They were lined up according to birthdays in 1993 — Berger was the oldest by three weeks and a day over Thomas.

Spieth was the youngest. They all were 21. Spieth had just crossed $9 million in career earnings, and he would earn $20 million that year in prize money and a FedEx Cup bonus.

Berger was never the first to be mentioned from that high school class, and he still isn't. But then, he is used to being overlooked and that doesn't bother him.

“I think a lot of the guys that they give credit to deserve credit,” Berger said. "But I’ve been pretty consistent and I’ve accomplished a lot for the short amount of time that I’ve played out here on tour. You look at some of the other guys and what they have accomplished, I’m kind of right in line with that.

“My goal has always been to be the No. 1 player in the world and some people will laugh at that and that’s fine,” he said. “But that's something that every day I wake up and I strive for.”

He is playing next week at Riviera, a field that boasts nine of the top 10 in the world. It's another chance to make a name for himself.