Analysis: Short work by high court of Trump's `big one' 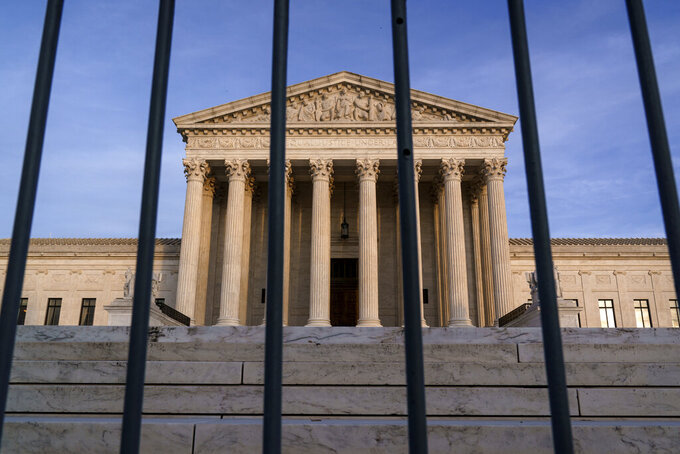 FILE - In this Nov. 5, 2020, file photo, the Supreme Court in Washington. As the court on Friday, Dec. 12, rejected a Texas-based lawsuit to overturn the election results, not even Trump’s three high court appointees were willing to rise to the defense of the president. (AP Photo/J. Scott Applewhite, File)

WASHINGTON (AP) — It didn't take the Supreme Court long to make short work of what President Donald Trump called “the big one.”

And as the court on Friday rejected a Texas-based lawsuit to overturn the election results, not even Trump's three high court appointees were willing to rise to the defense of the president. Trump has been clinging to baseless claims of fraud in the hope of reversing election results that made Democrat Joe Biden the next president and deprived Trump of four more years in the White House.

For all Trump's predictions that the court and his justices would make things right, he and his supporters were lacking one basic element: a strong legal argument that might plausibly attract some sympathy on a court now dominated by conservative justices.

A Republican senator, Nebraska's Ben Sasse, delivered a stinging summary of the court's rebuke to Trump and his allies. Sasse said "every American who cares about the rule of law should take comfort that the Supreme Court — including all three of President Trump’s picks — closed the book on the nonsense.” Sasse, a potential 2024 presidential candidate, has been one of the few Republicans willing to criticize Trump.

Following a string of legal setbacks in battleground states he lost in November, Trump had pinned his hopes on a desperate Supreme Court lawsuit that no Republican lawyer with high-court experience would touch. The suit was filed by Texas Attorney General Ken Paxton and backed by 18 other Republican attorneys general and 126 GOP members of the House of Representatives. It asked the court to take the unprecedented, even outlandish, step of setting aside the 62 combined electoral votes for Biden in Georgia, Michigan, Pennsylvania and Wisconsin.

The justices, acting late Friday, ended the suit as quickly as it began, saying in a mundane, three-sentence order that Texas had no right to question how other states conduct their elections.

The justices appeared to be unanimous in concluding that they would not disturb the electoral votes, three days before presidential electors meet to formally choose Biden as president. The justices Trump nominated — Neil Gorsuch, Brett Kavanaugh and Amy Coney Barrett — said nothing to suggest they disagreed with the outcome, and they were likewise quiet when the court rejected an appeal from Pennsylvania Republicans earlier in the week.

The silence was in sharp contrast to what Trump forecast when he nominated Barrett in September, even before Justice Ruth Bader Ginsburg had been buried, and urged the Senate to confirm Barrett before Election Day. Then, Trump said she would be needed to help settle disputes over the election that Trump had been saying for months would be fraudulent, without any basis.

The setback was clearly on his mind Saturday: He retweeted a story from a conservative commenter, with the president's three court appointees pictured, that said they were “missing in action” and he accused the court of having “ZERO interest” in the merits of the case while bemoaning that his pleadings were “NEVER even given our day in Court!”

As recently as Tuesday, he had retweeted a photo of Barrett from a follower who boasted that the Democrats had cheated, but that the “wheels are coming off” their scheme. “They got caught because we were leading by so much more than they ever thought possible. Late night ballot ‘dumps’ went crazy!" Trump tweeted, repeating one of his favorite claims that he had an insurmountable lead that was overcome only by fraud.

In fact, in Pennsylvania, Michigan and Wisconsin, ballots counted later on the night of the election and in the days following were overwhelmingly mailed-in votes that tended to favor Biden. The shift in the vote totals was completely expected — and widely discussed in advance of the election — because laws in those three states prohibited the early processing of mailed-in ballots.

Paxton's lawsuit — which the state's top Supreme Court lawyer, unusually, did not sign — cited the shift in the vote, the widespread use of mailed-in ballots because of the coronavirus pandemic and the roles played by state courts and governors, instead of legislatures, in changing rules to accommodate voters amid the pandemic. These and other arguments had been made and disposed of in state and federal courts since just after the Nov. 3 election.

The Supreme Court isn't always unwilling to step into political controversies. Twenty years ago, with a presidential election hanging in the balance, the court voted 5-4 to halt a state court-ordered recount in Florida and effectively decided the election in Republican George W. Bush's favor. That case split the court's majority conservatives and four liberals.

In 2000, only 537 votes separated Bush and Democrat Al Gore in Florida, and the winner of that state would become president.

Even so, the court was heavily criticized for its decision, especially the admonition that the opinion was “limited to the present circumstances” and not to be cited as precedent. It hasn't been since.

This year, the election did not turn on the outcome in one state, or even two. Trump would have had to reverse Biden wins in at least three of the six battleground states the president has complained about since the election. Arizona and Nevada are the others, though neither was included in the Texas lawsuit.

Two years ago, Chief Justice John Roberts derided Trump for derisively using the term “Obama judge” to complain about a court ruling he didn't like. Roberts said then that judges are not in the pocket of presidents who appoint them, even if they tend to share a judicial philosophy.

With such a weak argument and a big ask of the court, the Trump-backed lawsuit the court easily dismissed didn't come close to putting Roberts' assertion to the test.