Analysis: Tough choices about who's next in line for vaccine 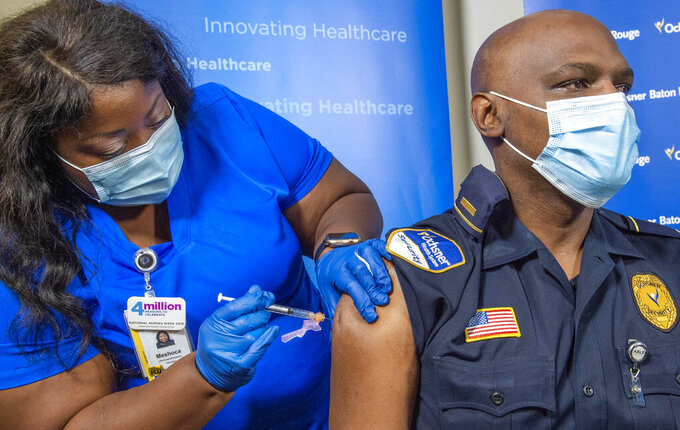 BATON ROUGE, La. (AP) — Even before the first week of coronavirus vaccines ended in Louisiana, Gov. John Bel Edwards’ administration was inundated with requests from people, advocates and state officials asking for their favored groups of frontline workers or vulnerable populations to be next in line for the shots.

“It would be easier to talk about the groups that have not sent a request," the Democratic governor said.

Widespread agreement seemed to form around the decision to divvy up the first 200,000-plus vaccines for hospital employees, for emergency medical services workers and for those who live and work at nursing homes, state-run veterans' homes and other long-term care facilities.

Deciding who's chosen for the next phase of coronavirus vaccinations will be much trickier.

Edwards, who will determine the prioritization, has some time. It will be weeks before Louisiana has enough vaccine doses to cover the first group of eligible health care workers and long-term care facilities residents and employees for the two-shot regimen required for immunization.

But pressure on the governor about his impending choices already is growing.

“There are lot of individuals anxious to know when they or a loved one might be in line for a vaccination and which priority group will they be in,” Edwards said Thursday. “We don’t have all of that figured out yet.”

The Louisiana Department of Health has received more than 50 requests — and counting — from individuals seeking a vaccine and advocacy groups, lobbyists and officials requesting prioritization for people. That doesn't count people making their pitches directly to the governor or others in his administration.

Emails and letters provided to The Associated Press by the health department show Cheniere Energy is seeking prioritization for employees of its liquefied natural gas facility, Southwest Airlines wants consideration for its workers and the head of the Chiropractic Association of Louisiana asked when chiropractors will be in line.

Mike Brown, president of the National Chicken Council, asked for chicken industry workers to be early in line, writing: “Prioritizing vaccinations for our workers will not only be important to help keep workers safe and healthy but will aid in keeping our food supply chain operating with minimal disruptions.”

The American Diabetes Association wants prioritization for Louisiana's 434,000 diabetics who are at greater risk of death from COVID-19 complications.

Dr. Gary Clark, chief of neurology service at Texas Children's Hospital, received his first vaccine dose and made a pitch for his 89- and 90-year-old parents in Louisiana: “I fear that they could fall through the cracks but believe they should be high priority for vaccination. Do you have a program for elderly not in nursing homes to receive the immunization?”

When Adm. Brett Giroir visited Louisiana earlier this month, the federal assistant health secretary who oversees U.S. testing operations for President Donald Trump’s administration predicted that choosing which groups move to the front of the line for the second phase of vaccinations will cause “a lot of controversy” across states.

In its first week with access to the Pfizer vaccine, Louisiana started immunizing employees at hospitals who regularly encounter COVID-19 patients and EMS workers. People in Louisiana nursing homes and other long-term care facilities are expected to begin receiving vaccinations after Christmas, with a second vaccine from Moderna.

To determine who's next in line, Edwards said he largely intends to follow recommendations of a panel of scientific experts that advises the U.S. Centers for Disease Control and Prevention, when the advisory group sets its second phase guidance.

Edwards also said he will consider equity issues and vaccination priorities to help lessen the strain on Louisiana's hospitals, which are packed with COVID-19 patients.

It will be months before Louisiana has enough vaccine shipments for widespread immunizations. The governor considers the strong interest a good sign.

“That actually bodes well for us as we move forward because we do need people to be vaccinated” to stop spread of the coronavirus and end the pandemic, he said.