Analysis: Trump leans on tone that turns off voters he needs 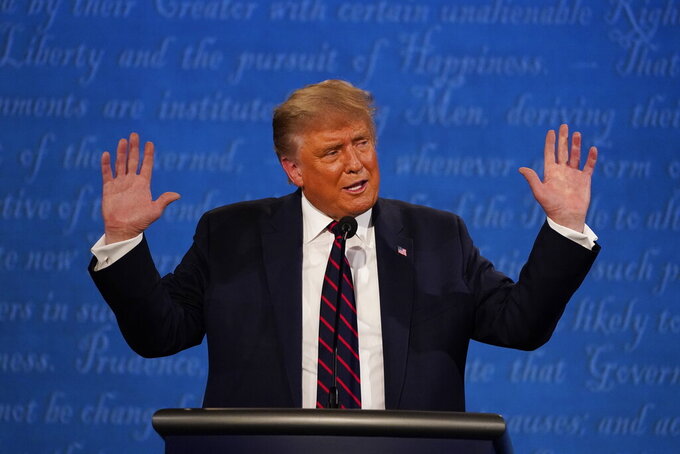 WASHINGTON (AP) — President Donald Trump needed to make the first general election debate about his rival, Democrat Joe Biden. Instead, as he so often does, Trump made it about himself.

The president set the tone from the start for one of the ugliest general election debates in recent memory, badgering Biden and repeatedly interrupting him. Biden alternated between ignoring the president and growing visibly irritated. Moderator Chris Wallace admonished and pleaded with Trump to allow his rival to speak.

Trump's aggressive posture may have appealed to his most passionate supporters — a primetime display of the brashness he has brought to the Oval Office. But by the end of the 90-minute contest, it was unclear whether Trump succeeded in making up any ground in trying to expand his coalition or win over persuadable voters, particularly white, educated women and independents who have been turned off in part by the same tone and tenor the president displayed on the debate stage.

“Trump brought the chaotic nature of his presidency to the debate stage,” said Alex Conant, a Republican strategist. “He needed to knock Biden off his game, but he may have just reminded independent voters why they’ve turned against him.”

Indeed, if there were ever a debate that turned voters away from politics altogether, this was it. Despite an array of complex and substantive issues on the debate agenda — a Supreme Court vacancy, the government's response to the coronavirus pandemic, the nation's reckoning over race and police brutality — the candidates' dramatically different visions for the country were frequently overshadowed by their obvious disdain for each other.

What did break through likely were not the moments Trump was seeking. The most striking exchange of the night came when he failed to condemn white supremacist groups. And when prodded by Biden to address the Proud Boys, a male-only group of neo-fascists who describe themselves as “western chauvinists” and have been known to incite street violence, the president offered a puzzling response.

“Proud Boys, stand back and stand by,” Trump said.

There were also glaring gaps in Trump's outlines for addressing the future of health care coverage in America and controlling the pandemic, which has killed more than 200,000 people in the U.S. this year. He also refused to embrace the science of climate change, even as record wildfires rage in the West.

Among Trump's political challenges throughout this tumultuous year has been leveling a sustained and consistent attack against Biden. Some Republicans believe he has squandered many of the advantages of incumbency: the money and the months a sitting presidents can spend defining an eventual rival in the eyes of voters.

The result: With five weeks until Election Day and voting already underway in some key states, Trump has consistently trailed Biden in national polls. Biden also holds a lead in some of the battleground states, although others appear to be significantly closer.

With time running out to change the trajectory of the race, Trump did arrive at the debate armed with an array of attacks on his opponent. He challenged Biden's effectiveness during his nearly five decades in Washington and tried to link his more moderate rival to the far-left flank of the Democratic Party. He launched a barrage of unsubstantiated corruption charges against Biden's son for work he did in Ukraine, as well as his addiction struggles, and he challenged Biden's intelligence.

“Don’t ever use the word smart with me," Trump said to the former vice president. “There’s nothing smart about you.”

Biden slapped back at the president's attacks over and over using his own searing rhetoric, calling Trump “a clown,” “a racist” and “a liar.” At one point when Trump kept interrupting, Biden charged, “Will you shut up, man?”

To be sure, the lowbrow debate could hold risks for Biden, too. His campaign needs strong turnout from young people, Black voters and Latinos — groups with lower turnout rates and in some cases, less enthusiasm for Biden — to turn his solid standing in polling into a victory in November. There were few chances for Biden to make a cohesive case for why his agenda would have a transformative impact on their lives, in part because of Trump's repeated interruptions.

Still, the former vice president appeared well aware of the need to look past Trump and speak to those Americans when the opportunity arose. He labored at times to ignore Trump's onslaught, instead speaking directly to the camera and the millions of voters watching at home.

He offered an olive branch to a deeply divided nation, vowing to be a president for those who support him and those who don’t — a contrast to Trump, who has drawn a distinction between coronavirus deaths in blue states and red states.

When Trump tried to raise the unsubstantiated corruption charges against Biden’s son, the former vice president said the issue wasn’t his family or Trump’s. Turning to the camera once again, he declared, “It’s about your family.”

The president made no real attempts to speak to all Americans, particularly those who have vigorously opposed his presidency and see the prospect of a second term as a threat to the nation’s democratic systems. Nor did Trump spend any time reflecting on the Americans who have died this year from the coronavirus, insisting only that the tally would have been much higher if Biden had been president.

The end result appeared to leave few cheering, including some Trump allies, who privately suggested the president was too aggressive. Publicly, however, some of his ardent supporters insisted Americans got what they wanted from the president.

“Trump proved again why he is the best counterpuncher in American politics," said evangelical leader Ralph Reed. "It's not always pretty, but it's effective, and it's why Trump bested Biden tonight."

Editor’s Note: Steve Peoples has covered presidential politics for the AP since 2011. Follow him at http://twitter.com/sppeoples

Julie Pace has covered the White House and politics for the AP since 2007. Follow her at http://twitter.com/jpaceDC