Analysis: Trump wants a 2016 repeat in a very different year 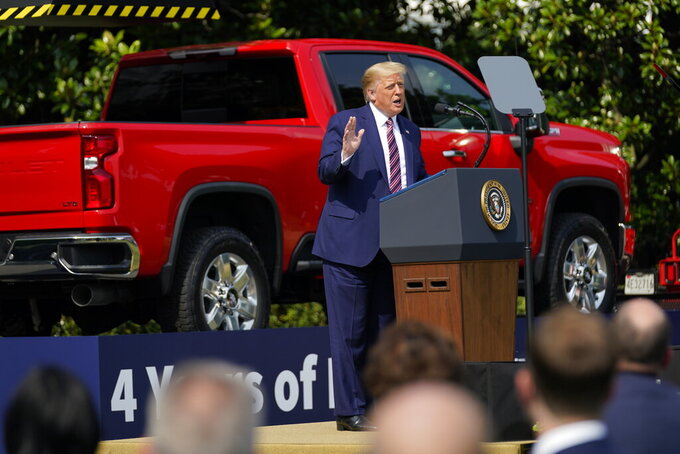 President Donald Trump speaks during an event on regulatory reform on the South Lawn of the White House, Thursday, July 16, 2020, in Washington. (AP Photo/Evan Vucci)

WASHINGTON (AP) — In the summer of 2016, Donald Trump was trailing in the polls. With time running out, he changed up his campaign leadership team, though not his own mercurial behavior.

Four years later, and in the midst of another summer slump, Trump is hoping a similar campaign shakeup will help put him on the path to another come-from-behind victory in November, this time against Democrat Joe Biden.

But there are multiple reasons why 2020 is a very different campaign year for Trump.

Chief among them is Trump’s own positioning. Trump ran in 2016 as an outsider, someone who could shake up Washington and bring a businessman’s acumen to the federal government. Now, he’s the chief executive in Washington at a time of extraordinary national crises and facing overwhelmingly negative reviews from Americans for his handling of the COVID-19 pandemic and for his response to a national reckoning over race.

The issue that needs to be addressed, according to some Republicans, isn’t how Trump’s campaign is run. It’s Trump himself.

“This campaign’s problem is the president is alienating so many people that their pool of potential voters is getting dangerously too small to win,” said Brendan Buck, a Republican who advised former House Speaker Paul Ryan. “Until that changes, good campaign management is going to be insufficient.”

Indeed, Trump has often appeared to be out of step with most Americans in recent months. He all but declared victory over the coronavirus pandemic as infections were starting to surge in new pockets across the country, including in states like Florida, Texas and Arizona where he's enjoyed strong support. He’s shown little concrete interest in police reform following the deaths of Black Americans and has instead focused much of his energy on defending prominent displays of Confederate monuments.

The president and his campaign advisers say they’ve been here before, fighting against what they see as establishment forces that don’t reflect the scope of Trump's self-proclaimed “silent majority” of supporters. They repeatedly point to polling from 2016 that showed Trump on track to lose to his Democratic challenger, Hillary Clinton.

But privately, Trump’s campaign and outsider advisers acknowledge that the president’s situation is dire and showing no signs of improvement. The campaign is worried about its support with moderate Republicans and independents, suburban woman and older white voters — all groups that could find a comfortable home with Biden, who was among the most centrist Democrats in the 2020 race.

Wednesday’s ouster of campaign manager Brad Parscale was the campaign’s clearest acknowledgement that Trump’s reelection effort is in need of a course correction. Parscale, whose role had already been diminished, was replaced by Bill Stepien, an experienced GOP operative.

Some Republicans welcomed the change but said it would only matter if it signaled the start of a revamped campaign.

“Resets are important in campaigns as long as you take full advantage of the fresh start,” said Scott Reed, senior political strategist at the U.S. Chamber of Commerce. He said the campaign was in need of both a “new and improved level of message discipline that includes the White House staff,” and a robust battleground state strategy.

Trump’s 2020 campaign apparatus was initially supposed to be the major advantage he didn’t have four years ago, when he set out to run for president with a small, inexperienced clutch of advisers. He set up his reelection campaign quickly after his inauguration, drawing in more experienced Republican hands and amassing a formidable bank account for advertising and field operations.

Those resources were supposed to be used to sell the strong economy Trump planned to run on in November. Instead, the campaign is urging voters to stick with Trump through the downturn that has accompanied the pandemic. The campaign is also leaning hard into the barely coded racial rhetoric Trump has used following nationwide protests over police brutality against Black Americans, warning of violence in cities with large minority populations.

The campaign has also struggled to launch a formidable assault on Biden, who is familiar to many Americans after his eight years as vice president and is more well-liked than Clinton. After spending months trying to cast Biden as “sleepy” and past his prime, advisers have been urging Trump to level two main attacks: accusing Biden of being soft on China and painting the former vice president as a puppet for liberal Democrats, despite his more moderate record.

Trump’s weakened state has indeed been cheered by Democrats, who view his handling of the pandemic in particular as an “I told you so” moment for a president they’ve long contended is out of his depth in the Oval Office. Yet many in the party say they are still scarred from Trump’s upset win four years ago and wary of over-reading the current political state of play.

With few high-profile campaign events this year because of pandemic restrictions, Biden’s campaign is well aware that the three debates this fall will likely take on outsize importance.

And Priorities USA, a super PAC backing Biden, projected this week that a single-digit drop in Biden's support among white working-class voters or a small drop in turnout among minority voters in November could swing the race back in the president’s favor.

“While the numbers certainly have been encouraging for Democrats, we are not done and we still have more work to do to maintain, to retain the gains that we’ve made,” said Guy Cecil, chair of Priorities USA.

The one intangible that is giving Democrats confidence? The likelihood that Trump himself won’t change, even if the chess pieces around him do.

“Observing his behavior, I have concluded he is like the man who refuses to ask for directions,” House Speaker Nancy Pelosi said.

EDITOR'S NOTE — Julie Pace has covered the White House and politics for AP since 2007. Follow her at https://twitter.com/jpaceDC.