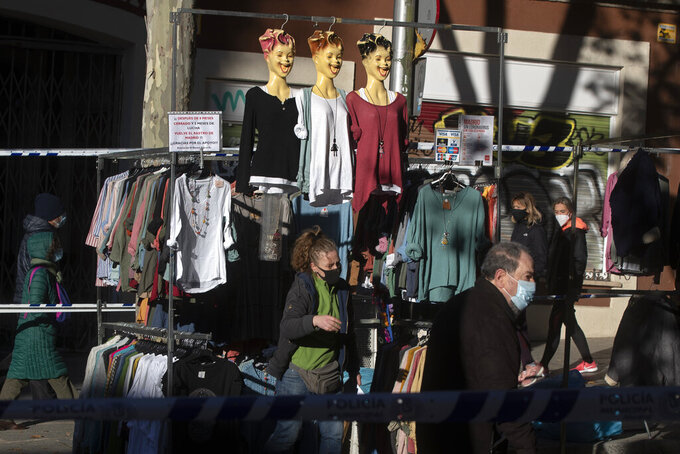 People walk by a clothes stall in the Rastro flea market in Madrid, Spain, Sunday, Nov. 22, 2020. Madrid's ancient and emblematic Rastro flea market reopened Sunday after a contentious eight-month closure because of the COVID-19 pandemic that has walloped the Spanish capital. (AP Photo/Paul White)

MADRID (AP) — Madrid’s ancient and emblematic Rastro flea market reopened Sunday after a contentious eight-month closure because of the COVID-19 pandemic that has walloped the Spanish capital.

With many major European flea markets still shut down, the Rastro’s return seems to be another example of Madrid’s bid to show that heavy coronavirus restrictions may not be necessary even among the latest surge of the virus and some sort of normality can resume with precautions.

That stance has been both criticized and lauded.

After lengthy negotiations, city authorities agreed the Rastro could open at 50% capacity, with half its 1,000 stalls alternating each Sunday for a maximum crowd of 2,700 people.

Police with backup drones monitored the market to avoid overcrowding.

Dating back to the 1700s, the Rastro sells the usual flea market mix of antiques, clothes, furniture, bric-a-brac and curios in stalls that snake down through a warren-like district next to Madrid’s majestic Plaza Mayor square.

Long a traditional meeting and drinking place, the bustling Sunday morning market used to attract thousands of tourists and residents alike. If you arrived after 11 a.m., it was almost impossible to move.

Even though not packed — with one-way pedestrian flows to prevent grouping — the Rastro’s reappearance is likely to be welcomed, another example of Madrid’s bid to keep things going.

“Here we are, we are in an open space,” said Sara García, a 44-year-old owner of a jewelry stall. “We fully comply with all the rules they told us to follow. We have more security than indoor places, so it is the best place, so I say to everyone to come to the Rastro because it is a safe place.”

Back at the start of the pandemic, Madrid’s hospitals and morgues were saturated. That eased in May, but a second wave this summer put the region back in the spotlight as infections soared.

Díaz Ayuso insists draconian measures aren't the answer and instead opts for lighter, more localized limitations, leaving bars and restaurants open for most of the day and cinemas and theaters too, albeit with reduced capacity, compulsory masks and social distancing.

Although no one knows for sure why some regions’ figures go up or down, health data these days appear to back Díaz Ayuso, leading some German newspapers last week to talk of the “Madrid miracle.”

The region’s 14-day infection rate is below 300 per 100,000 inhabitants — high still but below national and European averages and way down from the 500-plus figures Madrid was posting just weeks ago.

Some experts explain the drop by the fear factor that has made Madrid residents more cautious amid increasing media scrutiny, but also because regional authorities have been favoring rapid antigen tests that are cheaper but mostly detect symptomatic cases while conducting less of the pricier, time-consuming but more accurate lab tests.

Even if that would slightly skew the infection data, the straight-forward rates of hospitalization have also been unquestionably downward.

COVID-19 patients occupy around 14% and 32% of hospital and intensive care unit beds, respectively, better than many Spanish regions.

Díaz Ayuso says she is “proud to be improving the rates without decreeing the closure of dozens of companies,” adding that Madrid was currently producing one in three new jobs.

But some health workers are unconvinced.

“Speaking like that is not appropriate when we have between 20 and 30 COVID deaths a day in Madrid,” said Jesús García Ramos, spokesman for the Satse nurses’ union in Madrid.

García says that while numbers are down, Madrid’s 15,000 public health workers “are saturated.” About 1,500 are on COVID-19 sick leave and normality in hospitals “is a long way away,” he says.

Many health workers are particularly furious over Díaz Ayuso’s decision to pour an estimated 50 million euros ($59 million) into a 1,000-bed hospital to help deal with coronavirus, instead of shoring up a system run down by spending cuts.

The Nurse Isabel Zendal emergency hospital, built in less than six months, is supposed to open shortly, but it’s still not clear who will staff it.

Díaz Ayuso hopes personnel from other hospitals will come voluntarily, but hasn't explained what the already strained centers they come from will do with fewer staff.

“I think we are the only ones in the world to have done such a thing, and that says it all,” García Ramos said, pointing out that there are whole wings in Madrid hospitals that aren't in use due to a lack of resources.

“It would have been more useful to fit out those areas, improve the infrastructures we already have and reinforce them with nurses and other health workers,” he said.

AP writer Aritz Parra and Alicia León in Madrid contributed to this report.