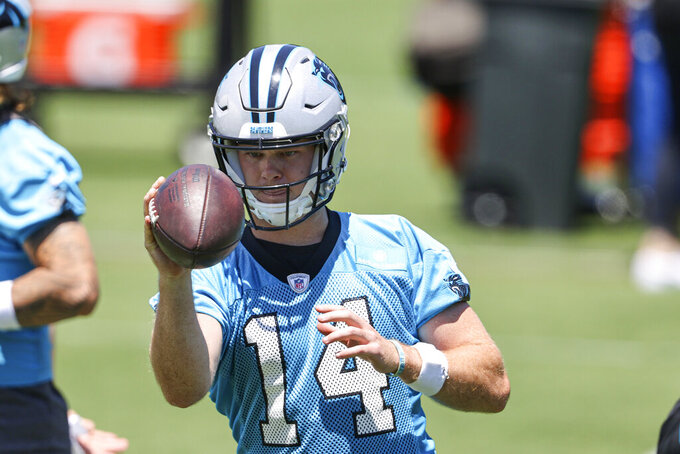 Anderson said Darnold has a certain “aura” about him that was missing when they played together for two seasons with the Jets.

“I saw like a new energy out of him, a glowing charisma that I didn’t really see in New York,” said Anderson, who caught passes from Darnold with the Jets in 2018 and 2019. “... You know when a person, you can see a glow in them, their energy, an aura — I can see that when I walked into the building and just being around him.”

Darnold, the No. 3 overall pick in the 2018 NFL draft, is hoping to resurrect his career in Carolina after going 13-25 as a starter in three seasons with the Jets. He was acquired by the Panthers earlier this offseason for three draft picks. The Jets have since turned to this year’s No. 2 overall pick Zach Wilson from BYU to be their quarterback of the future.

Anderson, who missed all of the OTAs while working out with a trainer, was excited to catch up with Darnold and his other teammates and is hoping the new starting quarterback finds success in Carolina's offense.

“The New York system was a little more complex and had a lot of nuances and things like that that was more difficult for everybody, not just him or me,” Anderson said. “I think this system is a little more graspable.”

The Panthers had their entire roster at minicamp Tuesday, although about a dozen players were held out of practice and wore red jerseys to signify they're recovering from injuries.

Panthers first-round draft pick Jaycee Horn, a cornerback from South Carolina, was among those players on the field after signing a four-year contract on Tuesday. The deal includes a fifth-year team option.

Horn missed some of last week's OTA practices at the advice of his agent.

“It felt good to get it done and now I can just focus on football,” said Horn, the No. 8 pick in this year's draft.

While several teams around the league decided against mandatory minicamps this offseason, Panthers coach Matt Rhule insisted on attendance at OTAs. Minicamp was invaluable for the growth of the team, especially after missing all of last year's offseason workouts due to the coronavirus pandemic in his first year at the helm.

“The players are getting a chance to spend time around each other and a chance to spend time in our scheme," Rhule said. "And as coaches, this is practice for us, too — all of the two-minute situations and reacting to them. Do we clock it here? Do we do this or that? We go back and have a serious debrief on it after practice. ... I don’t know how we did it without (OTAs and minicamps) last year, to be honest with you.”

Defensive end Hassan Reddick, who was acquired by the Panthers this offseason via free agency, went as far as to say the extra work could give Carolina a leg up on the competition.