Another 3 NBA games called off amid virus, 16 test positive 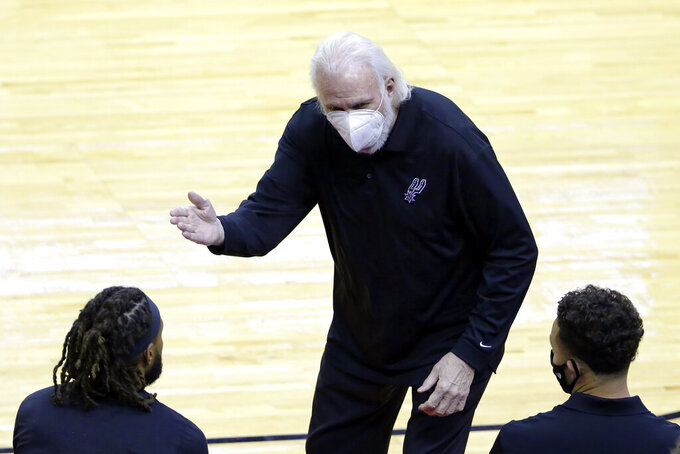 San Antonio Spurs head coach Gregg Popovich in a mask as he talks with players on the bench during the second half of an NBA basketball game against the Houston Rockets Tuesday, Dec. 15, 2020, in Houston. (AP Photo/Michael Wyke)

The NBA also revealed Wednesday that 16 players — by far the most in a one-week period since training camps started — returned positive COVID-19 tests between Jan. 6 and Tuesday. With 497 players tested, that reflects a positivity rate of 3.2%.

Phoenix's home game Wednesday against Atlanta was called off, as was the Suns' home game with Golden State on Friday. Also called: Friday's game where the Wizards would have gone to Detroit. The reason in all three cases was the same, that the Suns and Wizards wouldn’t have enough players cleared to participate.

“Obviously, it's not the typical NBA season that we're all accustomed to," Charlotte coach James Borrego said Wednesday. “But we'll get through it."

That Suns-Hawks game was the third on Wednesday’s schedule to be called, joining Utah at Washington and Orlando at Boston. It also marks the second consecutive time that a team ran into issues after playing in Washington; the Miami Heat lost eight players to COVID-related issues following their road game against the Wizards on Saturday.

“Not ideal," Hawks guard Kevin Huerter tweeted, shortly after the postponement of the game in Phoenix was announced.

Also not playing Wednesday: Zion Williamson, ruled out by the New Orleans Pelicans for their game at the Los Angeles Clippers because of the league's health and safety protocols. In his case, Pelicans coach Stan Van Gundy said, the issue was an inconclusive test.

“He's not with us here at the game tonight," Van Gundy said. “He's back in his hotel room and we'll know more as further results come back."

Contact-tracing issues can also be triggered when a player is found to have been, or possibly have been, exposed to someone who is positive for COVID-19. That has been the issue for a number of players in recent days, excluding the 16 new positives.

“I’m not terribly upset about any of the things we have to do. It kind is what it is at this point and we’ll try to make the most of it and get through it,” Toronto guard Fred VanVleet said Wednesday. “It does feel like it’s getting a bit much ... like trying to plug holes in a sinking boat.”

The latest postponements push the total overall this season to nine because of virus issues. The Suns, Hawks, Heat, Wizards and Philadelphia 76ers are among the teams dealing with significant roster depletion in recent days because of either positive tests, tracing — which indicates if someone has been in an unsafe amount of contact with a person who tested positive — or both.

It's all part of a turbulent week that also saw the league and the National Basketball Players Association release updated rules strictly limiting players from venturing away from their homes or hotels for anything other than games, practices, workouts or emergencies. The new rules will be in place for at least two weeks, with hopes the virus issues around the league calm down in the interim.

“Either get with the program or stay home," VanVleet said. “And I’m at work today.”

Phoenix's next possible game is Saturday at home against Indiana; that would seem in doubt. The Celtics are hoping to host the Magic on Friday in the second game of what was intended to be a two-game series; if that game happens, it would be Boston's first contest in a full week.

“I think the biggest thing is, obviously we want to be safe, first and foremost, but we want to figure out how we can do it," Heat guard Duncan Robinson said. “Because recently, I think probably the biggest thing we’ve all struggled with is the uncertainty of, ‘Who’s playing? Who’s out? What are we doing? What’s this protocol? What’s that protocol?’ So, that’s been frustrating but everyone’s going through it."

Postponed games are likely to be rescheduled in the second half of the season. The league has only released schedules through March 4, saying earlier this season that the second half would also include “any games postponed ... that can reasonably be added to the second half schedule."