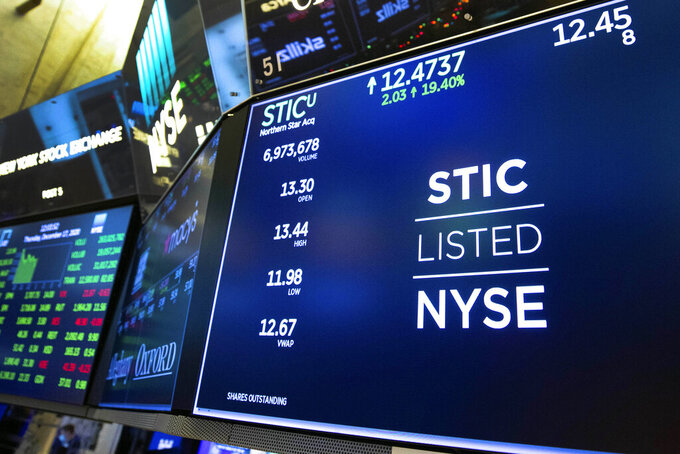 In this photo provided by the New York Stock Exchange, a board above a trading post on the floor, shows the symbol for Northern Star Acquisition Corp., Thursday, Dec. 17, 2020. Bark is heading to the stock market through a $1.6 billion deal in which Northern Star Acquisition Corp. buys the company and takes it public. (Colin Ziemer/New York Stock Exchange via AP)

Founded in 2012, Bark ships dog treats, chews and squeaky toys, through its service called BarkBox. It also has other brands, including Bark Eats, which creates personalized meal plans for pups.

It’s a good time to sell kibble online. More people are avoiding stores and shopping for their pets online during the pandemic. Pet supplies are one of the fastest growing categories online, with sales up 64% in the first eight months of this year, according to retail consulting firm 1010data.

Pet store chain Petco, which has revamped its website, also plans to go public. And shares of online pet store Chewy, which went public last year, have more than tripled so far this year.

Bark is heading to the stock market through a $1.6 billion deal in which Northern Star Acquisition Corp. buys the company and takes it public. Northern Star is a special purpose acquisition company, or SPAC, which is created just for this reason: to buy another company and take it public. Helicopter taxi service Blade is going public that way, too.

Bark will trade on the New York Stock Exchange under the new ticker symbol “BARK.”

The company expects to raise $454 million which it plans to use to expand in more countries outside the U.S. and to create more products.