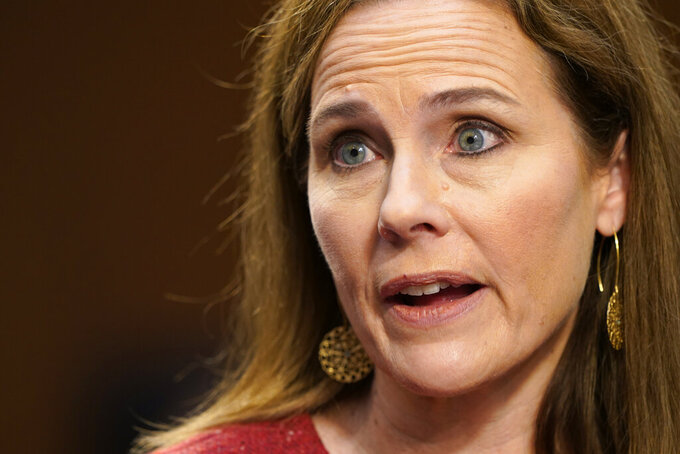 WASHINGTON (AP) — Supreme Court nominee Amy Coney Barrett is speeding toward confirmation, with a majority of the Senate supporting her and a final vote expected Monday. The Senate Judiciary Committee approved her nomination on Thursday as Democrats boycotted the vote.

If confirmed on Monday, as is expected, Barrett could be sworn in as a justice almost immediately, just a week before the Nov. 3 election.

Majority Leader Mitch McConnell said confirming Barrett, 48, will be “another signature accomplishment" for Republicans in their effort to fill the courts with "men and women who believe in the quaint notion that maybe the job of a judge is to actually follow the law.”

Democrats have made a vigorous case against Barrett's confirmation and argue the seat last held by the late liberal Justice Ruth Bader Ginsburg should not be filled so close to the election. Yet they have no recourse to stop it.

A look at what’s next for Barrett’s nomination and what her confirmation would mean:

COMMITTEE APPROVAL: ‘WE DID IT’

The Judiciary panel sent the nomination to the floor Thursday morning with all 12 Republicans on the committee supporting Barrett and voting in person. Though Democrats stayed away, they placed at their empty spots posters of their constituents who they say have been helped by the Affordable Care Act, which is now being challenged in court.

In a statement Wednesday with Senate Democratic Leader Chuck Schumer, the committee Democrats said they will “not grant this process any further legitimacy by participating in a committee markup of this nomination just twelve days before the culmination of an election that is already underway.”

Senate Judiciary Committee Chairman Lindsey Graham said he was not going to let Democrats “take over the committee” and moved ahead with the vote anyway, under committee rules. He said this was a “groundbreaking, historical moment,” especially for conservative women.

“We did it," Graham said to his Republican colleagues after the vote. “We did it. Judge Barrett’s going to the floor. I hope you look back on this time on the committee and say, ‘I was there when it mattered.’ And you were.”

Republicans are expected to easily confirm Barrett next week. They control the chamber by a 53-47 margin, and only one Republican, Maine Sen. Susan Collins, is a certain “no” vote. A second Republican, Alaska Sen. Lisa Murkowski, has said she opposes filling the seat before the election.

Still, senators will have to pass through several procedural steps before the final tally. Besides boycotting the committee hearing, Democrats objecting to the nomination are expected to force multiple floor votes over the weekend, potentially keeping in Washington Republican senators who would otherwise be at home campaigning.

With no ability to stop Barrett's ascent, Democrats are trying to turn voters against the nomination by making the case that she could strike down the Affordable Care Act and roll back abortion rights. In four days of hearings last week, they spent much of their questioning focused on those two issues.

Democrats have also argued that McConnell’s decision to move forward on Barrett’s nomination after Ginsburg died in September is “hypocrisy” after Republicans refused to consider President Barack Obama’s nominee, Judge Merrick Garland, several months before the 2016 election. Republicans say the difference is that the White House and Senate are now controlled by the same party.

Barrett could be sworn in the same day of the confirmation vote, so she could be a justice as soon as Monday.

One of her first acts could be to attend a private telephone conference of the justices on Oct. 30. Oral arguments at the court resume on Nov. 2, and they being done over the phone through at least through December because of the coronavirus pandemic.

The court already has eight cases on the calendar for the first two weeks of November, including one on Nov. 4, the day after the presidential election, that’s a test of religious rights, a dispute over a Philadelphia Catholic agency that won’t place foster children with same-sex couples.

The following week the justices will hear a challenge to the Obama-era Affordable Care Act. Democrats made that case central to their argument against Barrett, warning she could be a vote to strike down the law. Barrett said she couldn't comment on the case, but she emphasized that she is " not here on a mission to destroy the Affordable Care Act.”

Barrett would also be part of any court decisions related to the presidential election, unless she recused herself from them.

Barrett’s confirmation could cement a 6-3 conservative majority on the court for years to come. The shift from Ginsburg to the conservative appeals court judge from Indiana would be the most pronounced ideological change on the court in 30 years.

Barrett is the most open opponent of abortion nominated to the Supreme Court in decades — Republicans called her a “pro-life” judge during her confirmation hearings — and she could tilt the balance on that issue and many others.

It is unclear whether Barrett’s confirmation will help or hurt President Donald Trump or Democrat Joe Biden in the presidential contest. The confirmation vote will be held eight days before the Nov. 3 election, which is without precedent.

Republicans are defending 23 of the 35 Senate seats that are on the ballot this year, and most of their vulnerable members have embraced Barrett in an effort to bolster their standing with conservatives. Cory Gardner in Colorado, Martha McSally in Arizona, Joni Ernst in Iowa, Kelly Loeffler in Georgia, John Cornyn in Texas and Thom Tillis in North Carolina quickly rallied to Trump’s pick and called for a quick confirmation.

Another senator in a tight race, Collins, opposed an immediate vote and said the next president should decide who replaces Ginsburg.

This story has been corrected to reflect that Republicans are defending 23 of the 35 Senate seats up for election this year. not 25 of 38 seats.