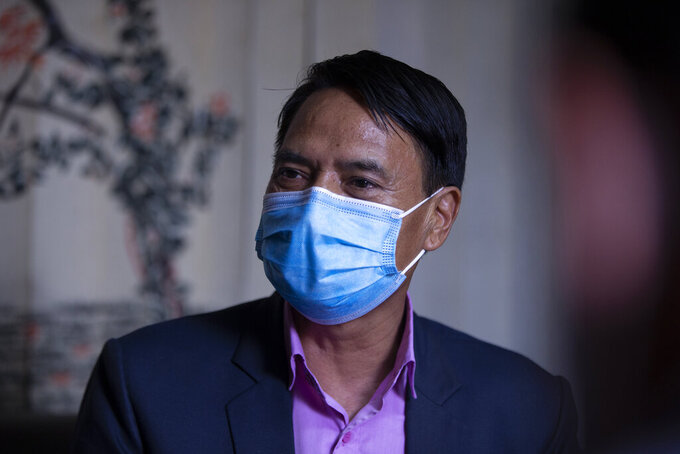 Nepalese Health Minister Sher Bahadur Tamang speaks during an interview with the Associated Press in Kathmandu, Nepal, Thursday, June 17, 2021. Nepal has been able to significantly lower reduce new coronavirus infections after its worst outbreak, but is in desperate need of vaccines, the health minister said Thursday. (AP Photos/Bikram Rai)

KATHMANDU, Nepal (AP) — Nepal has significantly reduced coronavirus infections after its worst outbreak, which overwhelmed the country’s medical system, but is in desperate need of vaccines, its health minister said Thursday.

“We have gone down from the red stage to the yellow stage, but are not yet able to reach the green zone,” Health Minister Sher Bahadur Tamang said in an interview with The Associated Press. “We are working very hard to get us there.”

Nepal has been under lockdown since April after new cases and deaths spiked following a massive outbreak in neighboring India.

Close to 10,000 new cases and hundreds of deaths were reported daily in mid-May, when the surge was at its worst. There was an acute shortage of hospital beds, medicines and oxygen for patients.

In the capital, Kathmandu, doctors treated patients in hospital corridors, verandahs and parking lots, and ambulances were turned back due to a lack of space. There were long lines at oxygen plants to fill cylinders.

After weeks of lockdown, the situation has improved. The number of new cases on Thursday was 2,607 along with 39 deaths, according to the Health Ministry.

Nepal launched a vaccination campaign in January but was forced to suspend it after India halted exports of domestically produced AstraZeneca vaccines because of its own outbreak. China then donated 800,000 doses of Sinopharm vaccine in March and another 1 million earlier this month.

Still, only about 8.5% of the population has received one shot and about 2.5% have been fully immunized.

“The main issue for us is vaccines, and unless we get vaccines we cannot say everyone is safe,” Tamang said. “We have been appealing to all countries manufacturing vaccines to please provide us with some.”

About 1.4 million elderly Nepalese received an initial dose of the AstraZeneca vaccine in March but now are unsure when they can get a second dose as the government struggles to acquire the vaccine.

Tamang said the government has set aside funds to purchase vaccines, and both the World Bank and Asian Development Bank are providing money as well, so funds are not currently a problem.

COVAX, the U.N.-backed project to supply vaccines to poor regions of the world, pledged Nepal 2 million doses by March but has only provided 248,000 because it also is facing a serious shortage.

“We were supposed to get vaccines from the COVAX facility, but we feel like we have fallen to the lowest priority position on their list,” Tamang said.

He said new regulations have been adopted to allow any vaccine producer to come to Nepal to run vaccine trials, and if possible produce them, with all fees waived.

With the emergency phase now over, the country needs to focus on improving its medical facilities and equipment to prepare for future disease outbreaks, Tamang said.

He noted that Nepal has received planeloads of emergency supplies such as oxygen cylinders, oxygen concentrators, face masks, gloves and other medical goods from the United States, the United Kingdom, China, Switzerland and Australia.

“We are very thankful to all the donors who came to help us in our time of need but now we are urging the donors to please give us ICU beds, ventilators, X-ray machines and equipment to test for other diseases too,” Tamang said.