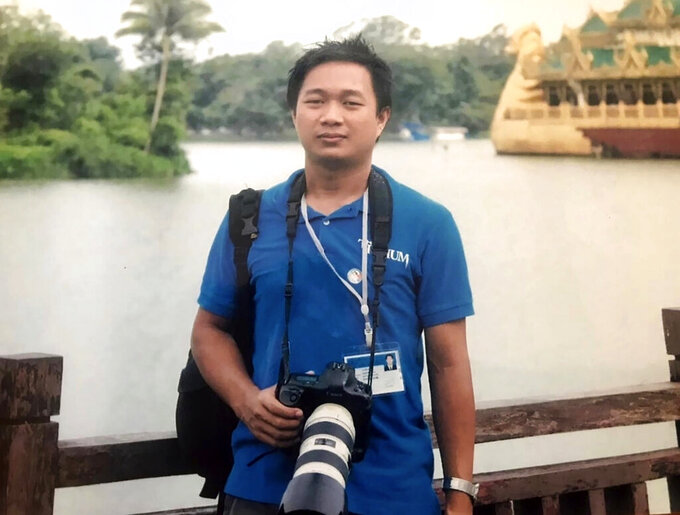 FILE - This undated family file photo shows Associated Press journalist Thein Zaw in Yangon, Myanmar. A court in Myanmar extended on Friday, March 12, 2021, the pretrial detention of an Associated Press journalist who was arrested while covering demonstrations against a coup. He is facing a charge that could send him to prison for three years. His next hearing will be on March 24.(Thein Zaw family via AP, File)

YANGON, Myanmar (AP) — Associated Press journalist Thein Zaw and several other members of the media who have been charged under a public order law while covering anti-coup protests in Myanmar are returning to court Wednesday.

It is the second round of hearings for the journalists, who were arrested on Feb. 27 and face up to three years behind bars. Thein Zaw’s lawyer, Tin Zar Oo, said after the first hearing on March 12 that she might be able to submit an application for bail on Wednesday.

About 40 members of the media have been detained since the coup, and roughly half of them remain in custody, according to Myanmar’s Assistance Association for Political Prisoners. Seven, including Thein Zaw, were arrested on Feb. 27.

Authorities also canceled the licenses of five local outlets that had extensively covered the protests. Mizzima, Democratic Voice of Burma, Khit Thit Media, Myanmar Now and 7Day News have continued operating despite being barred from broadcasting or publishing on any media platform.

“Associated Press journalist Thein Zaw and all other journalists wrongly detained in Myanmar should be immediately and unconditionally released,” Shawn Crispin, senior representative for Southeast Asia of the New York-based Committee to Protect Journalists said after the March 12 hearing. “The abuse of vague criminal charges to jail journalists is tantamount to making all news reporting a crime. Myanmar’s junta must stop detaining journalists and allow reporters to do their jobs without fear of reprisal.”

Thein Zaw and others are charged under Sub-Section 505(A) of the Penal Code, which criminalizes “any attempt to cause fear, spread false news, or agitate directly or indirectly a criminal offense against a government employee."

Section 505 covers seditious activities, and was amended by the junta to include a broader range of offenses and extend the maximum prison term from two years to three.

Thein Zaw was arrested as he was photographing police, some of them armed, charging at anti-coup protesters. A video shows that although he stepped to the side of the street to get out of their way, several police rushed over and surrounded him. One put him in a chokehold as he was handcuffed and then taken away.

Lawyer Tin Zar Oo said Wednesday’s hearing will take place at a special court in Insein Prison in northern Yangon, where Thein Zaw has been held since his arrest. The prison has been notorious for decades for holding political detainees, and hundreds of people arrested during the latest crackdown are jailed there.

At the previous hearing, Tin Zar Oo and one of Thein Zaw’s brothers were allowed into the courtroom to take part in the 10-minute videoconference, along with a representative from the U.S. Embassy and his translator.

Until then, Thein Zaw had not been seen by his lawyer or any of his family members since his arrest. Tin Zar Oo said visits at Insein Prison, where he is being held, were not allowed because of coronavirus concerns, so his family has been dropping off food and supplies for him at the gate.

Tin Zar Oo said that her client looked healthy at the March 12 hearing, but suffered from asthma at night. She said Thein Zaw’s brother commented that he had lost weight.

The Associated Press and many press freedom organizations have called for the release of Thein Zaw and the other detained journalists.

“Independent journalists must be allowed to freely and safely report the news without fear of retribution,” Ian Phillips, AP vice president for international news, said after the arrest. “AP decries in the strongest terms the arbitrary detention of Thein Zaw.”

The U.S. government, in addition to criticizing the coup and the violence by Myanmar’s security forces, has been supportive of press freedom in the Southeast Asian nation.

“We condemn the attempted media blackout and efforts to silence the voices of the people by revoking the licenses of several local media organizations,” U.S. State Department spokesperson Ned Price said earlier this month. “We are deeply concerned about the increasing attacks on the freedom of expression, including for members of the press. We call for the release of journalists and for all others who have been unjustly detained.”

Even during deposed leader Aung San Suu Kyi’s time in office, journalists were often targeted for their reporting.

Two journalists working for the Reuters news agency were arrested in 2017 while working on a story about military violence directed at Myanmar’s Rohingya minority. They were accused of illegally possessing official documents and sentenced to seven years before being freed in 2019 in a mass presidential pardon.