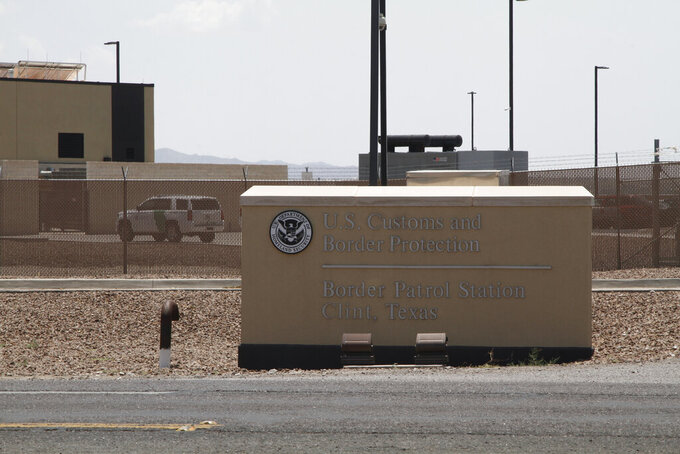 FILE - In this June 26, 2019, file photo, the entrance to the Border Patrol station in Clint, Texas. More Americans disapprove than approve  of how President Joe Biden is handling waves of unaccompanied immigrant children arriving at the U.S.-Mexico border, and his efforts on larger immigration policy aren’t polling as well as those on other top issues. (AP Photo/Cedar Attanasio, File) 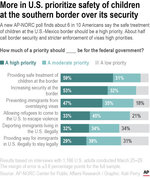 WASHINGTON (AP) — More Americans disapprove than approve of how President Joe Biden is handling the sharply increasing number of unaccompanied migrant children arriving at the U.S.-Mexico border, and approval of his efforts on larger immigration policy falls short of other top issues — suggesting it could be a weak point for the new administration.

A new poll by The Associated Press-NORC Center for Public Affairs Research also shows that solving the problem of young people at the border is among Americans' highest immigration priorities: 59% say providing safe treatment of unaccompanied children when they are apprehended should be a high priority, and 65% say the same about reuniting families separated at the border.

Former President Donald Trump built his presidency around hard-line policies that expanded and fortified border walls, made it tougher for people fleeing drug violence and other desperate circumstances in Mexico and Central America to seek U.S. asylum and separated immigrant families.

Biden has tried to seize political momentum on the issue by promising a more humane and orderly system, but his administration has struggled to cope with rising numbers of migrants coming to the border, especially unaccompanied children.

Overall, 40% of Americans disapprove of Biden’s handling of children reaching the nation's southern border without their parents, compared with just 24% who approve. Thirty-five percent don't have an opinion either way.

“I don’t know how to politically correctly say this: I do feel that, because there’s this new administration, that people feel that they can come to the country,” said Mindy Kiehl, a 40-year-old real estate agent in Erie, Pennsylvania, who otherwise approves of Biden's handling of the presidency so far.

Biden said at a recent news conference that “we’re sending back the vast majority of the families that are coming.” But his struggles on the issue go beyond unaccompanied minors.

That gap comes despite the White House endorsing the most ambitious overhaul of the nation's immigration system in a generation on Biden's first day in office. It has stalled in Congress, though, and Republicans and even some top Democrats say passage will be difficult.

The plan would provide an eight-year path to citizenship for the estimated 11 million people in the U.S. illegally, but the poll shows doing so isn't high on the public's priority list. Only 29% of Americans overall, including 42% of Democrats and 14% of Republicans, called legal status for people in the country illegally a high priority.

Additionally, only a third of Americans each say that allowing refugees to come to the U.S. or expanding “guest worker” programs should be high priorities.

Jack Henes, a retiree in Sebastian, Florida, said Biden hasn’t handled immigration as well as some other hot-button issues while calling what's happening on the U.S. southern border an “administrative nightmare.”

While awaiting the larger legislative package, the Democratic-controlled House has passed smaller-scale reforms that face uncertain futures in a Senate split 50-50. Biden also has used executive actions to attempt to roll back many Trump administration immigration policies but has been criticized for failing to do enough fast enough.

“My concern is that President Biden has allowed the world to feel it's OK to just come on in,” said Matthew Behrs, a Trump supporter in Wisconsin.

The poll shows many Americans rank some of the major goals of the Democratic proposal as moderate priorities instead of high ones, suggesting Biden lacks a clear mandate for how best to proceed on the issue, potentially hurting his leverage with Congress.

And many want to see efforts to step up enforcement be part of the conversation: For 53%, increasing security at the border is a high priority. Some 47% of Americans also say the federal government should make strengthening policies to prevent immigrants from overstaying their visas a high priority.

The poll also finds Americans are more likely to favor than oppose providing a way for immigrants brought to the U.S. illegally as children to stay legally, 53% to 24%, with 22% saying they are neither in favor nor opposed. Still, just 41% call extending legal protections to so-called Dreamers a high priority. A plan approved by the House but awaiting Senate action seeks to do just that.

Biden has now assigned Vice President Kamala Harris to work with Central American countries to try to address the root causes of illegal immigration. Henes, the retiree, suggested that Biden has given the problem to Harris as a way of buying himself some time — but that it hasn’t helped.

“They’re still in the huddle,” Henes said. “They’re not ready to call a play.”

The AP-NORC poll of 1,166 adults was conducted March 26-29 using a sample drawn from NORC’s probability-based AmeriSpeak Panel, which is designed to be representative of the U.S. population. The margin of sampling error for all respondents is plus or minus 3.6 percentage points.