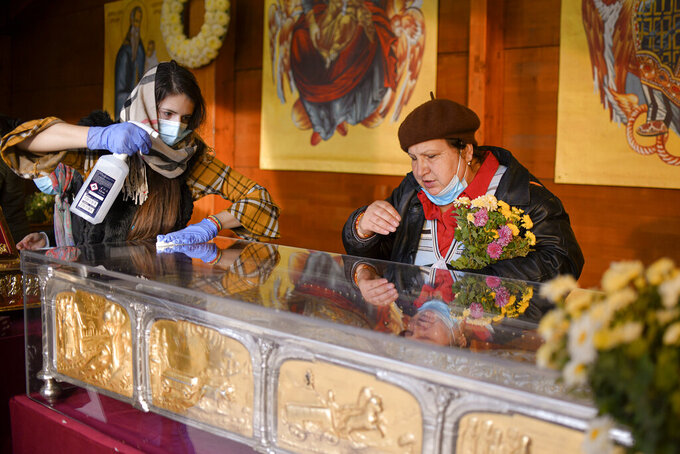 A woman crosses herself while a church volunteer, wearing a mask for protection against the COVID-19 infection, sprays disinfectant and wipes the plastic cover of the casings said to contain holy remains, some of Saint Dimitrie Basarabov, on the first day of a pilgrimage in Bucharest, Romania, Sunday, Oct. 25, 2020. (AP Photo/Andreea Alexandru)

BUCHAREST, Romania (AP) — The feast of St. Dimitrie of Basarabov, the patron saint of Bucharest, is a show of Orthodox Christianity's strength in Romania, where a weeklong festival devoted to the former hermit typically draws up to 100,000 people from all over the country to the capital every October.

This year, the coronavirus halted the national pilgrimage. The celebration honoring Dimitrie started at the end of a week when Romania’s daily tally of coronavirus infections rose above 5,000 for the first time since the start of the pandemic. The number of COVID-19 patients in intensive care also reached a new high.

Infection-control measures limited access to the festival to Bucharest residents. The feast was shortened to three days and drew less than a third of the usual number of worshipers.

As per tradition, remains that are said to be of three saints, including St. Dimitrie, were taken out of the Patriarchal Cathedral and placed in a nearby chapel. People wearing masks for protection against the virus filed past the boxes said to contain the holy remains with miraculous healing powers, kissing and wiping personal belongings on the shiny metal cases.

Volunteers regularly sprayed disinfectant on the plastic covers on the three cases and wiped them down.

The pandemic restrictions drew criticism from members of the Orthodox clergy. About 85% of Romania’s more than 19 million people identify as Orthodox Christians, and the government measures dramatically altered religious celebrations in 2020,

Patriarch Daniel, the head of the Romanian Orthodox Church, reminded worshippers that communism fell in Romania in December 1989, two months after government officials had banned that year's St. Dimitrie festival because a Communist Party meeting was taking place in a building near the Patriarchal Cathedral.

A fast-moving revolution resulted in the execution of President Nicolae Ceausescu, Romania's last communist leader, and his wife, Elena, on Christmas Day. To Patriarch Daniel, the connection to failing to honor a patron saint is clear.

“This humiliation of St Dimitrie was ‘rewarded,’, as in a few months the communist regime fell," he said this week. "God does not allow being mocked”