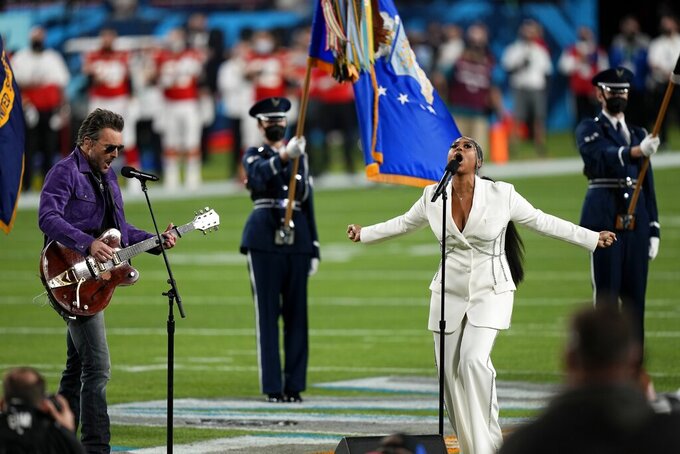 Tom Brady has won a record seventh Super Bowl in his first season with the Tampa Bay Buccaneers, throwing three touchdown passes while keeping Patrick Mahomes and the Kansas City Chiefs from winning a second consecutive championship in a 31-9 victory.

After 20 seasons in New England, Brady signed a $50 million, two-year contract with Tampa in March. The Buccaneers hadn’t reached the playoffs since 2007 and hadn’t won a postseason game since the 2002 title season.

The 25-year-old Mahomes lost by double digits for the first time in his stellar career. Both of the 2018 MVP's playoff losses have come against Brady. The other was in the AFC championship game two years ago.

It was the first time Mahomes, who led the Chiefs to their first championship in five decades last season, lost a game he started by more than one possession since Nov. 19, 2016, when Texas Tech fell 66-10 to Iowa State.

Tampa Bay's Bruce Arians became the oldest coach to win a Super Bowl at 68. Pop star The Weeknd performed the halftime show, running through his many hits in a 14-minute set.

Due to the coronavirus pandemic, only 25,000 mask-wearing fans attended, including approximately 7,500 vaccinated health care workers given free tickets by the NFL. About 30,000 cardboard cutouts made the stadium look full.

A streaker wearing a hot-pink onesie eluded security and slid into the end zone with 5:03 left in the game. Kansas City’s high-powered offense never got that far against Tampa’s ferocious defense.

The Buccaneers earned their second NFL title and first in 18 years as the first team to play the big game at home, capping an unusual and challenging season played through the novel coronavirus. They won three road games as a wild card to reach the Super Bowl, and joined the NHL’s Lightning as a 2020 season champion. The Rays also went to the World Series but lost to the Dodgers.