AP Photos: Virus puts a stop to the big top in Bolivia 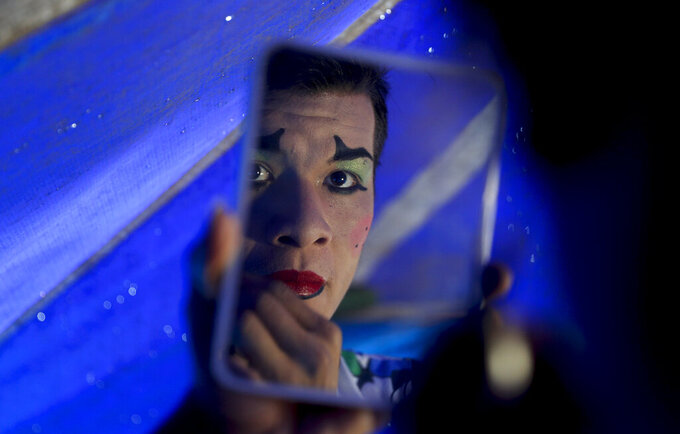 Jumbo Circus clown Franklin Parada, 22, puts on his clown face to train at the circus, even though it's been closed for four months in El Alto, Bolivia, Friday, June 26, 2020. To get by, Parada makes money offloading rice bags from trucks at a street fair. (AP Photo/Juan Karita)

EL ALTO, Bolivia (AP) — The Jumbo Circus had just pitched its blue and yellow tent on a lot in El Alto, a swollen, sprawling suburb of Bolivia's capital, when the new coronavirus struck.

“We thgough it would last three weeks, but we've now been stuck for four months,” said Joel Condori, the 27-year-old owner of the little one-ring show. Half of the 10 entertainers have drifted away, leaving just five to await a possibly distant reopening.

Like governments across the world, Bolivian officials banned mass gatherings to try to limit ecases of COVID-19. But the disease is still spreading here and experts say it may not have peaked yet.

So Condori can only wait. He practices his juggling and acrobatic routines before dusty, empty stands, and earns his living with odd jobs — sometimes a bit of welding, sometimes baking pizzas.

“There's always something to eat. There's no lack of work. At first we made food to sell, but it didn't go well. There was tough competition from the neighborhood ladies and we changed our approach."

Condori began in the circus while still in high school. He went with one to neighboring Chile, where he learned juggling and acrobatics. When he came back home, he bought a used tent and began touring towns across Bolivia.

“The circus is a responsibility. We can't let it die,” he said as the sun glints through small holes in the tent. “You can't live from the circus, you have the live for the circus.”

Franklin Parada, a 22-year-old clown and trapeze artist, sometimes makes a little money hauling bags of food at a street market in the Tupaj Katari neighborhood. But he also found a bit of work in his own field at a child's birthday party.

Returning to the circus to practice his routine, he fell and injured his shoulder.

“These accidents happen, but we can't bother the public. We have to forget the pain, smile and keep going," he said.