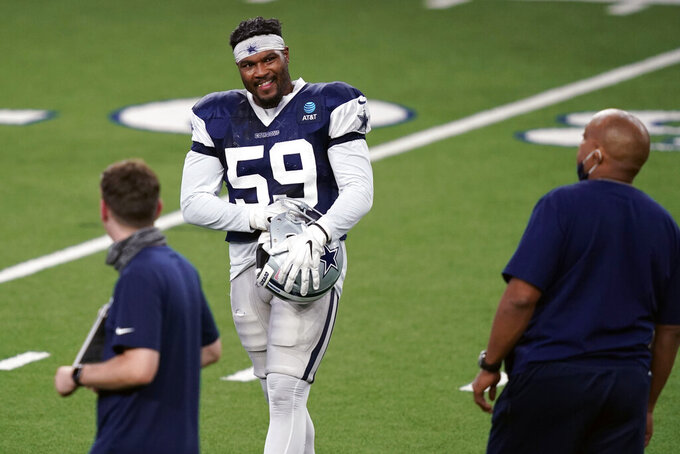 FRISCO, Texas (AP) — Right tackle La'el Collins and linebacker Sean Lee will start the season on injured reserve for the Dallas Cowboys with a chance to return after three weeks, a person with knowledge of the decision said Saturday.

Collins and Lee missed almost all of training camp with injuries first-year coach Mike McCarthy hasn't specified. The person spoke to The Associated Press on condition of anonymity because the IR moves are pending.

Both players had to be on the 53-man roster that was set Saturday to be eligible to return. Cornerback C.J. Goodwin and linebacker Justin March were among those released to get to the roster limit after both played all 16 games last season.

The three-week time frame for a return is an adjustment from the usual eight weeks to help teams after offseason workouts and preseason games were wiped out because of the pandemic.

Collins has started 47 of 48 games at right tackle over the past three seasons after moving from left guard. Cameron Erving was signed as the swing tackle in the offseason, while Brandon Knight got plenty of work at tackle in camp.

When Lee returns, it appears the longtime starter will be a backup with Leighton Vander Esch and Jaylon Smith filling the spots in new defensive coordinator Mike Nolan's scheme, which mostly relies on two linebackers.

Goodwin and March mostly played on special teams but saw some action on defense because of injuries. In another nod to the limitations created by COVID-19, all players regardless of experience are eligible for the practice squad.

Goodwin, a seven-year veteran, has spent the past two seasons with the Cowboys. March has been with Dallas two-plus years after a season in Kansas City. Both were undrafted out of college, and could re-sign as a result of the IR moves.

Tackle Terence Steele, an undrafted free agent out of Texas Tech, could be another candidate to fill in for Collins. He made the 53-man roster along with all the Dallas draft picks, including seventh-rounder Ben DiNucci, who is currently the third quarterback behind Dak Prescott and Andy Dalton.

Francis Bernard, an undrafted linebacker out of Utah, was among the camp standouts to get cut. He appears headed for the 16-player practice squad if he clears waivers. The practice squad was expanded from 10 players in another pandemic-related adjustment.