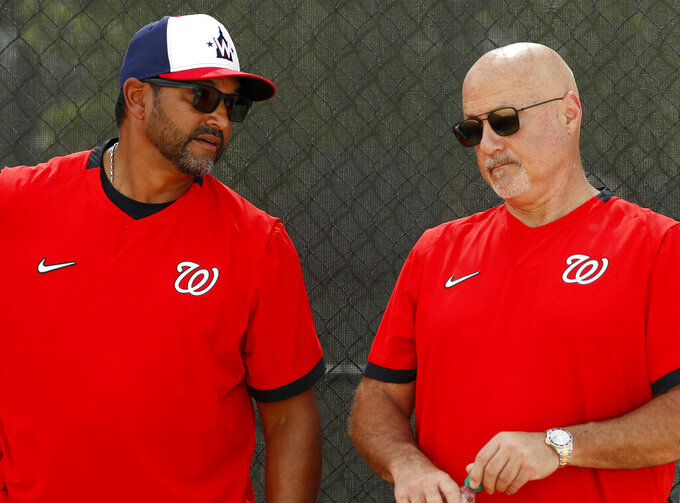 FILE - In this Feb. 17, 2020, file photo, Washington Nationals manager Dave Martinez, left, talks with general manager Mike Rizzo during spring training baseball practice in West Palm Beach, Fla. Armed with a new multiyear contract, Rizzo says his top priority is working on a new deal for Martinez. The team has a club option for Martinez for 2021, but Rizzo says he prefers a long-term deal for the manager. (AP Photo/Jeff Roberson, File)

WASHINGTON (AP) — Manager Dave Martinez and the Washington Nationals have agreed to work out a contract extension that will keep him in charge of the club beyond next season, according to a person with knowledge of the situation.

The person confirmed the news to The Associated Press on Friday on condition of anonymity because no official announcement had been made.

Martinez led the Nationals to the franchise’s first World Series championship in 2019, his second season as the team’s skipper.

When he initially was hired, Martinez signed a three-year deal with a club option for 2021 that had not yet been picked up by the Nationals.

After a title defense slowed by injuries and inconsistency during a 60-game season delayed and shortened by the coronavirus pandemic, Washington is 23-34 and last in the NL East. The Nationals will play a doubleheader against the New York Mets on Saturday after Friday night's game was postponed by rain.

Martinez was sporting his World Series ring on his right hand when he spoke to reporters via a video chat before word emerged Friday afternoon of a change to his contract.

“The coaching staff and myself decided to wear it for the last week of the season, so we’ve been wearing it this whole week. It’s kind of cool,” Martinez said about his ring. “Come Sunday, it goes off and goes back in its little shiny box. But it’s kind of nice to look down and look at it.”

Asked earlier in the week whether he would like his up-in-the-air contract status resolved before the season ends, Martinez said his agent and Nationals general manager Mike Rizzo had been discussing the matter.

“I love it here. I don’t see myself going anywhere else,” Martinez said then. “I appreciate the family. I appreciate this organization. We’ve built a special relationship here, so I hope I get a chance to stay for many, many years.”

Then he paused for five seconds before adding: “The sooner, the better, though.”

Nationals INF-DH Howie Kendrick said he hasn’t decided whether to retire or try to return in 2021 for what would be his 16th major league season. The 37-year-old Kendrick revealed Friday that he would have stopped playing after this season if hadn’t wound up being disrupted by the coronavirus pandemic.

“I was thinking about retiring after this year,” he said, “but because of COVID, it kind of raised the question of, like, ‘Man, do you want to go out like this? Do you want 2020 to be any worse?’”

Kendrick, who went on the injured list with a left hamstring injury on Sept. 9 and then was shut down for the season, said he wants to get healthy and talk to his family before deciding whether to extend his career.

Martinez said World Series MVP Stephen Strasburg is “progressing really, really good” from the nerve issue in his pitching hand that limited the righty to five innings this season.

“I don’t think there’s going to be any doubt that he’ll start spring training ready to go,” Martinez said.