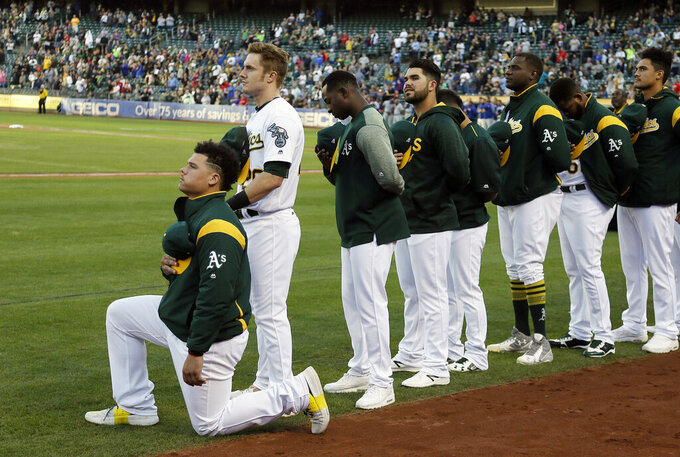 FILE - In this Sept. 23, 2017, file photo, Oakland Athletics catcher Bruce Maxwell kneels during the national anthem before the start of a baseball game against the Texas Rangers in Oakland, Calif. The New York Mets have agreed to a minor league contract with Maxwell, the first major league player to kneel during the national anthem to protest racial injustice in 2017, according to a person familiar with the deal. (AP Photo/Eric Risberg, File)

NEW YORK (AP) — The New York Mets have agreed to a minor league contract with catcher Bruce Maxwell, the first major league player to kneel during the national anthem to protest racial injustice, according to a person familiar with the deal.

The person spoke to The Associated Press on condition of anonymity Tuesday because the agreement had not been announced and was pending the completion of a physical and intake testing for the coronavirus. The deal was first reported by Newsday.

Maxwell began kneeling during the anthem late in his rookie season with the Oakland Athletics in 2017, about a year after San Francisco 49ers quarterback Colin Kaepernick sparked the protest movement in the NFL.

The 29-year-old Maxwell, who is Black, was the only major leaguer to take a knee before this season. Numerous players and coaches have since taken up the protest amid nationwide discourse this summer over social justice, and Black players have expressed regret that they didn't do more to support Maxwell in 2017.

“We should have been there,” Detroit Tigers outfielder Cameron Maybin told ESPN this month. "We had the chance to apologize to him. What we’re doing has been overdue. Long overdue.”

Maxwell was arrested in October 2017 and pleaded guilty to a disorderly conduct charge after police said he pointed a handgun at a woman who delivered food to his home in Scottsdale, Arizona. He was sentenced to two years of probation in July 2018.

The Athletics designated Maxwell for assignment in 2018 after he hit .182 in 18 major league games and released him after the season. He hasn't appeared in an affiliated major or minor league game since.