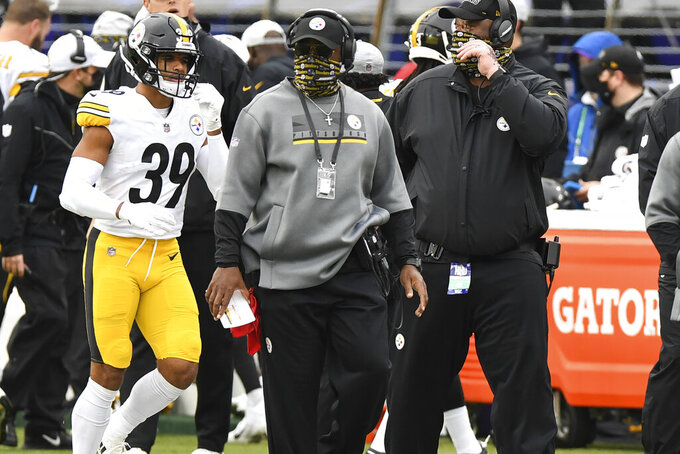 FILE - In this Sunday, Nov. 1, 2020 file photo, Pittsburgh Steelers head coach Mike Tomlin looks on during the second half of an NFL football game against the Baltimore Ravens in Baltimore. A person with knowledge of the matter told The Associated Press that Tomlin has been fined $100,000 and the club $250,000 because coaches improperly wore facial coverings last Sunday. The person said Friday, Nov. 6 that Tomlin and the Steelers were disciplined because members of the coaching staff were “not wearing face coverings at all times on the sidelines.” (AP Photo/Terrance Williams, File)

Pittsburgh Steelers coach Mike Tomlin was fined $100,000 and the club $250,000 because coaches improperly wore facial coverings last Sunday, a person with knowledge of the fines told The Associated Press on Friday.

The person, who spoke on condition of anonymity because the fines have not been announced, said Tomlin was among the coaches cited for “not wearing face coverings at all times on the sidelines” during the victory over the Baltimore Ravens.

The league has been clamping down on violators of sideline protocols designed to battle COVID-19. The NFL recently told its 32 teams to have all personnel wear masks in lockers rooms and on the sideline when not in the game. Players are required to wear masks during postgame contacts with opponents as well.

The Las Vegas Raiders and coach Jon Gruden this week were fined a total $650,000 and docked a sixth-round draft pick for repeated violations of the NFL’s COVID-19 protocols. A person familiar with the punishment said Thursday the team was fined $500,000, Gruden docked $150,000, and the draft pick stripped because of how the team handled Trent Brown’s positive coronavirus test last month. The team is expected to appeal.

The Raiders have been penalized several times this season for violating coronavirus protocols, with the punishments leading to a total of more than $1.2 million for the team, Gruden and players. They are the first to be penalized a draft pick following multiple violations.