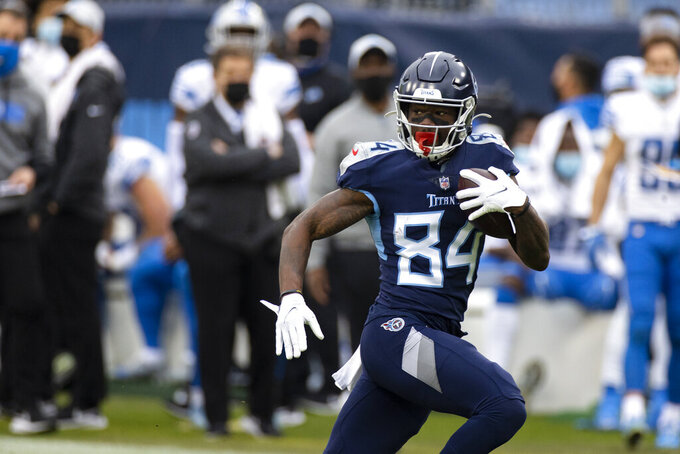 NEW YORK (AP) — The New York Jets got their long-elusive pass rusher, a No. 1 wide receiver and a playmaking linebacker. And that was just one day into the start of NFL free agency.

The biggest splash came Monday night when the Jets agreed to terms on a three-year deal with former Cincinnati Bengals defensive end Carl Lawson, according to a person with direct knowledge of the move.

The people spoke to The Associated Press on condition of anonymity because teams can’t announce free agent deals until the NFL’s new league year begins Wednesday. Teams have a two-day “legal tampering” period during which they can discuss contracts with players’ agents.

The Jets have lacked a consistent pass-rushing threat for years, with fans regularly bemoaning the absence of a consistent force off the edge. General manager Joe Douglas and new coach Robert Saleh believe they have one now in Lawson.

NFL Network first reported the deal for the former Bengals star, saying it is for $45 million with $30 million guaranteed.

The 25-year-old Lawson has 20 sacks in four seasons since being drafted by the Bengals in the fourth round out of Auburn. He'll be part of a promising defensive line in New York that includes defensive tackle Quinnen Williams, whose push up front should help create even more opportunities for Lawson. The Jets also have John Franklin-Myers and Folorunso Fatakasi on their line, which should be a strength next season.

Lawson, one of the top edge rushers available in free agency, ranked among the NFL leaders last season in quarterback pressures and QB hits.

Meanwhile, Corey Davis will be a No. 1 wide receiver for whomever the Jets have under center next season. After agreeing to terms on a three-year deal with the Jets, he became the first of the top tier of free agent wide receivers to find a new team — a group that also includes Kenny Golladay and JuJu Smith Schuster.

ESPN first reported the Jets' deal with Davis, saying it is for $37.5 million with $27.5 million guaranteed.

The 26-year-old Corey Davis tied a career best with 65 receptions in 12 games and set personal highs with 984 yards receiving and five touchdowns. With the Jets’ quarterback situation still very much uncertain, he’ll provide a reliable and physical target for whomever ends up throwing passes for New York.

Sam Darnold is the incumbent, but general manager Joe Douglas acknowledged he would be willing to trade the No. 3 overall pick in the 2018 draft after three seasons marked by injuries and inconsistency. The Jets hold the No. 2 pick in this year’s draft, so taking a quarterback such as BYU’s Zach Wilson or Ohio State’s Justin Fields remains a possibility. New York has also been mentioned in trade speculation involving Houston’s Deshaun Watson, who has said he doesn’t want to play for the Texans anymore.

Davis was the No. 5 overall pick by the Titans in 2017 out of Western Michigan, where he broke the FBS career record for yards receiving. After dealing with a hamstring issue for much of his rookie season, Davis broke out in 2018 with 65 catches for 891 yards and four TDs.

His production dropped the following season as he finished with just 43 receptions for 601 yards and two scores, and Tennessee declined the fifth-year option on his rookie deal. But Davis thrived last year, despite missing two games on the COVID-19 list, and had 11 catches for 182 yards and a TD against Cleveland in Week 13.

He served as the No. 2 in Tennessee opposite A.J. Brown. In New York, Davis will lead a receiving corps that includes Jamison Crowder and Denzel Mims. The 6-foot-3, 209-pound Davis’ physical style and ability to get yards after the catch should make him a nice fit in Jets offensive coordinator Mike LaFleur’s system.

New York also addressed a need earlier in the day by agreeing to terms with Jarrad Davis on a one-year deal. NFL Network first reported that agreement, saying it is worth up to $7 million.

He was a first-round pick of the Lions in 2017 out of Florida and started 45 of 55 games in Detroit. He had 289 total tackles, 10 1/2 sacks, seven forced fumbles, nine passes defensed and an interception while primarily playing middle linebacker for the the Lions.

The 26-year-old Jarrad Davis appeared to fall out of favor the past two years, with the Lions declining his fifth-year contract option last May — making him a free agent this year. He started a career-low four games last season.

He would appear to be a good fit for the 4-3 defensive system that will be run by Saleh and defensive coordinator Jeff Ulbrich. C.J. Mosley, who opted out last season because of the coronavirus pandemic, is currently slated to start at middle linebacker but Jarrad Davis could be used on the outside with the Jets or as depth.