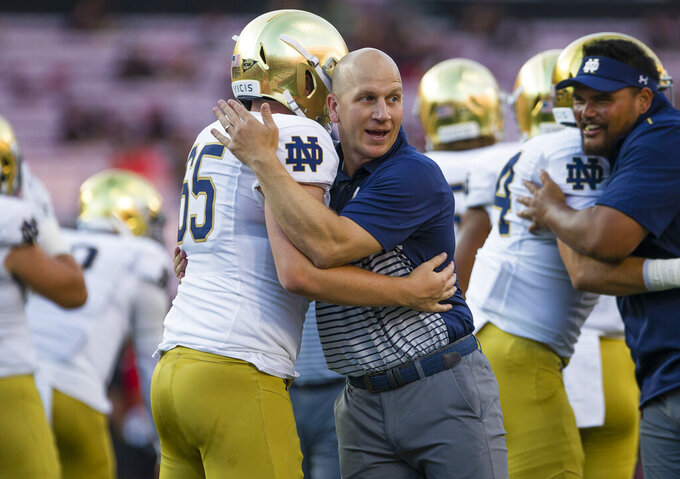 Notre Dame defensive coordinator Clark Lea hugs Notre Dame's Michael Vinson (65) before an NCAA college football game against Louisville, in Louisville, Ky., in this Monday, Sept. 2, 2019, file photo. Vanderbilt is negotiating a deal with Notre Dame defensive coordinator Clark Lea to make the former Commodores player its new head coach. Two people with knowledge of the situation told The Associated Press details of a contract were still being worked out but Lea was the school's top choice. (Michael Caterina/South Bend Tribune via AP) 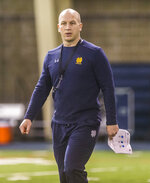 Two people with knowledge of the situation told The Associated Press details of a contract were still being worked out but Lea was the school's top choice.

Both people spoke on condition of anonymity because the school was not yet prepared to make an announcement.

The 38-year-old Lea is a Nashville native who played baseball at Birmingham-Southern and Belmont before walking on as a fullback at Vanderbilt, where he played from 2002-04. He started coaching at UCLA and also has coached at South Dakota State, Bowling Green, Syracuse and Wake Forest.

Lea has been Notre Dame's defensive coordinator for the last three seasons. The Fighting Irish made the College Football Playoff in 2018 behind a defense that ranked eighth in the nation in yards allowed per play (4.53).

Notre Dame is on the verge of making the playoff again. The second-ranked Irish (10-0) play No. 4 Clemson on Saturday in the Atlantic Coast Conference championship game.

Vanderbilt fired Derek Mason on Nov. 29 after he went 27-55 in seven seasons, including losing the first eight games of 2020. The Commodores (0-9) have lost 13 consecutive Southeastern Conference games, the program's longest skid since dropping 23 straight between 2000 and 2003.

On Monday, Vanderbilt canceled Saturday's season finale at No. 10 Georgia due to a combination of falling below both the number of scholarship players available and position requirements for the game due to COVID-19 issues, injuries and opt outs. That locked in the first winless season in school history.

Vanderbilt has at least generated some national goodwill this season by using Sarah Fuller at kicker. Last Saturday, she became the first woman to score in a Power Five football game when she kicked two extra points.

The football stadium at the SEC’s smallest and only private university had its last major renovation in 1981. Vanderbilt chancellor Daniel Diermeier, who started July 1, and athletic director Candice Lee, who had the interim title taken off in May, plan to involve the next coach in the university's plans for upgrading facilities.

“We can do a lot,” Diermeier said last week. “And we have an enormous amount of assets and we need to bring them, we need to leverage them in order to advance athletics at university as a whole.”