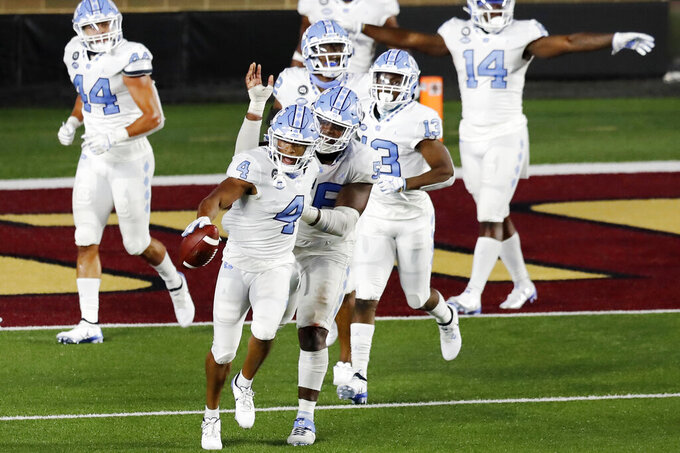 North Carolina defensive back Trey Morrison (4) celebrates after running the ball back on an interception of a two-point conversion attempt by Boston College during the second half of an NCAA college football game, Saturday, Oct. 3, 2020, in Boston. (AP Photo/Michael Dwyer)

The ACC had four teams ranked in the top 10 of the Top 25 for the first time in the league's nearly 70-year history.

As with everything in 2020, unusual circumstances brought on by the pandemic have conspired to create an unprecedented result.

Clemson is No. 1, as has been the case since the preseason. Nothing weird about that. Ardently independent Notre Dame sits at No. 5 as the ACC reaps the benefits of the Fighting Irish's year in residence.

Miami moved up to No. 7 in its second straight week in the top 10 and North Carolina jumped in at No. 8.

Having four FBS conferences, including the Big Ten and Pac-12 not playing yet certainly hasn't hurt the ACC's cause, either.

Still, after last season, when the ACC had only one team — Clemson, of course — in the final Top 25, the conference looks to be much improved, even if this doesn't last too long.

Unbeaten Miami goes to Clemson on Saturday. Have to think if the Hurricanes can't spring the upset or come reasonably close they could slip outside the top 10 as soon as next Sunday.

With eight ranked teams losing on Saturday, including six to unranked teams, the Top 25 got a thorough shake up. Reality check evaluates the newcomers and the holdovers.

Reality check: RB Travis Etienne set a career best with 114 yards receiving on five catches against Virginia. As the Tigers develop reliable outsider receivers to emerge from an experienced group, Etienne is becoming more of a threat in the passing game.

Reality check: Because it's not enough for Alabama to have only two potential first-round draft pick receivers, introducing John Metchie III. The former four-star had 181 yards and two TDs against Texas A&M.

Reality check: The Bulldogs' offensive line was dominant against Auburn, making QB Stetson Bennett's job fairly simple: Get rid of the ball quickly and don't throw it to the other team. That should be a winning formula against the non-Alabama, non-Florida parts of the schedule.

Reality check: The Irish always seem to have a big-time tight end. This year's model comes with a twist. Tommy Tremble is a hybrid tight end/fullback/H-back who lines up all over and leads the Irish in receiving with eight catches for 99 yards.

Reality check: The late start to the season could help the Buckeyes in one particular area: RB Master Teague, who suffered an Achilles injury during the spring, could be well enough to provide a one-two punch with Oklahoma transfer Trey Sermon.

Reality check: Interesting to see how the Hurricanes match up along the lines with Clemson, especially an offensive line that has been much improved after being a disaster in 2019.

Reality check: It has been a sloppy start for the Tar Heels, who are minus-3 in turnovers and averaging 9.3 penalties. Clean it up and the ceiling is still high for QB Sam Howell and Co.

Reality check: Who emerges as the Nittany Lions top wide receiver for QB Sean Clifford? Jahan Dotson is the only one on the roster who had more than 10 catches last season.

Reality check: The Cowboys' defense has been its strong suit with QB Spencer Sanders sidelined. Oklahoma State is seventh in the nation and first in the Big 12 in tackles for loss at 9.67 per game.

Reality check: The Bearcats have their best ranking since they spent much of the 2009 season in the top 10 under Brian Kelly.

Reality check: The Ducks' young defensive backs will get thrown into the deep end this season. S Brady Breeze became the fourth member of a talented secondary to opt out and declare for the draft.

Reality check: Have to cut QB Bo Nix and the offense some slack because that Georgia defense is something special, but through two games there is a lot to worry about with the Tigers' attack.

Reality check: The Vols look like Georgia lite. Big and physical up front on both sides of the ball, but searching for more explosiveness on offense.

Reality check: The best news for BYU last week was off the field. The Cougars added late-season games against Mountain West powers Boise State and San Diego State to boost their strength of schedule.

Reality check: A trip to Vanderbilt, followed by a visit from Missouri, should have the Tigers feeling confident for a game at the Swamp against Florida that's on deck.

Reality check: Could be a big loss despite the latest victory for the Mustangs: WR Reggie Roberson went out with a knee injury after five catches for 243 yards and two scores against Memphis.

Reality check: Kansas transfer Khalil Herbert has been a revelation. He had school-record 358 all-purpose yards, including 208 rushing, against Duke.

Reality check: The Wolverines are hoping for better depth on the defensive front, led by ends Aidan Hutchinson and Kwity Paye.

Reality check: Let's not use Alabama as a barometer for the Aggies progress under Jimbo Fisher. That's not really fair. Let's use Florida.

Reality check: You could make a very good argument that neither the Longhorns nor the Aggies should be ranked.

Reality check: The Ragin' Cajuns are back after a brief, Big Ten-related departure from the rankings. They have a big game against the unbeaten Chanticleers coming up to solidify their spot.

Reality check: It is rarely easy for the Cyclones, who are 10-9 in games decided by 10 points or fewer since the 2017 season. A breakthrough season will require some good fortune in the close ones.

Reality check: The return of WR Rashod Bateman from an opt out gives the Gophers a game-changing weapon.