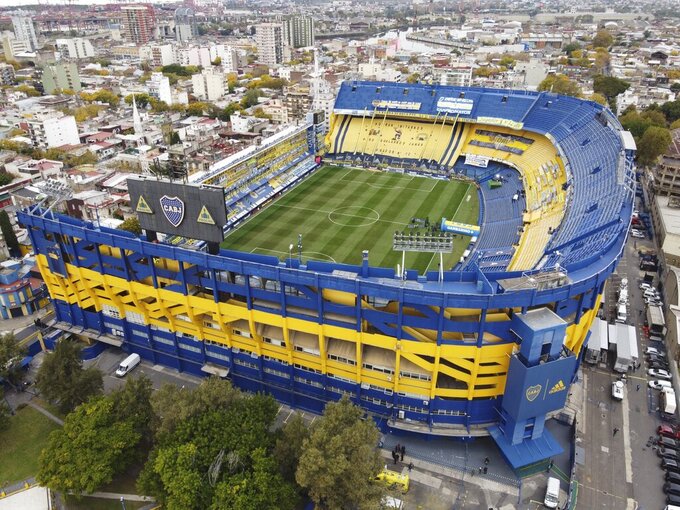 The Bombonera stadium is seen before a local league soccer match between Boca Juniors and River Plate in Buenos Aires, Argentina, Sunday, May 16, 2021. (AP Photo/Daniel Jayo)

BUENOS AIRES (AP) — Argentina’s national team has created a strict protocol to protect its players and staffers from COVID-19 during next month’s Copa America, as the country enters its worst period since the pandemic began.

The national team complex in Ezeiza will become a fortress to host superstar Lionel Messi and his teammates from May 26 to the end of the tournament, which will be played between June 13-July 10.

Because all players are to sleep in single rooms, 17 trailers were rented to serve as accommodation for coach Lionel Scaloni and his staff.

The Argentine soccer federation (AFA) also installed giant tents that will serve as a fitness center, restaurant, COVID test center and entertainment. The idea is to preserve social distancing in closed spaces. Each player will have to change in their own rooms.

Argentina will also play two World Cup qualifying matches before the continental tournament. It will host Chile on June 3 and visit Colombia five days later. Colombia is scheduled to co-host Copa America, but street protests against President Iván Duque have cast doubts over the organization.

As players arrive, they will be isolated until their COVID-19 tests come back negative. That will be repeated for at least three days, and there will be no visits from people outside the bubble.

Argentina's team doctor Daniel Martínez told journalists that even though some players are vaccinated “we have to take care as always” because South American soccer body CONMEBOL requires them to show negative tests.

“A vaccinated patient can be positive and that could stop him from playing,” Martinez said.

Argentina's national team is waiting for the country's health ministry to approve vaccines by Chinese pharmaceutical company Sinovac, which were donated by CONMEBOL, to immunize their players. Martinez confirmed some players have already taken their shots, but did not identify them.

Argentina has recently hit a record number of daily cases and deaths from COVID-19. The South American country has had more than 3.4 million cases and more than 72,000 deaths from the virus. ___