Argentina match to go ahead in Peru in WCup qualifying 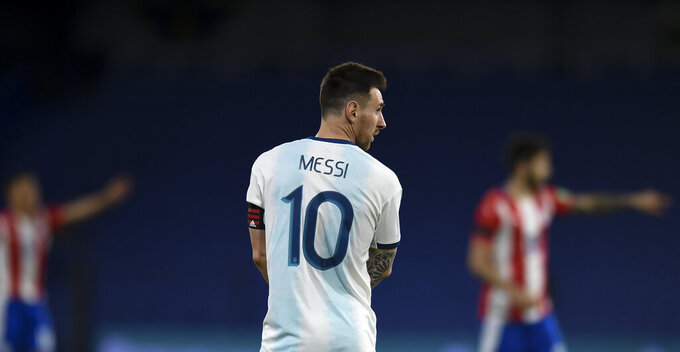 SAO PAULO (AP) — Despite the political crisis in Peru, Argentina’s final World Cup qualifying match of the year is expected to be played as scheduled in Lima on Tuesday.

Peruvian President Manuel Merino has resigned from his position, creating turmoil in the country and forcing Argentina to cancel its training sessions in the capital. But the country’s authorities assured South American soccer body CONMEBOL and FIFA on Monday that the match will be allowed to go forward as planned.

All 10 teams in the South American group will be in action on Tuesday, with Brazil playing at Uruguay, Ecuador hosting Colombia, Venezuela welcoming Chile and Paraguay hosting Bolivia.

The matches will all be played in empty stadiums because of the coronavirus pandemic.

Brazil leads the group with nine points from three matches, followed by Argentina with seven, Ecuador and Uruguay with six, and Paraguay with five.

The top four teams will automatically qualify for the 2022 World Cup in Qatar. The fifth-place team will go into an inter-continental playoff.

Besides the training disruption, Argentina will also have to prepare for the match without midfielder Exequiel Palacios, who fractured a bone in his back during the 1-1 draw against Paraguay on Thursday.

However, the two-time World Cup champions may have left back Nicolás Tagliafico returning from injury, and that could affect the team up front.

Argentina coach Lionel Scaloni improvised with striker Nicolás González in Tagliafico’s position against Paraguay. González did so well, scoring his team’s goal and defending solidly, that he is now considered to be a potential replacement for Lucas Ocampos.

Ocampos started alongside Lionel Messi against Paraguay but was taken off in the 60th minute and replaced by Ángel Di Maria.

Peru, in eighth place with one point, will be without forward Paolo Guerrero. Gianluca Lapadula and Raúl Ruidiaz are in contention to replace him.

Brazil will be without Neymar and seven other regular players for its match at the Centenario Stadium in Montevideo.

Uruguay also has some key absences, including midfielder Federico Valverde.

Brazil’s replacements failed to impress in the 1-0 victory over Venezuela on Friday, but Uruguay delivered a strong 3-0 win at Colombia on the same day, led by veteran strikers Edinson Cavani and Luis Suárez.

Brazil midfielder Allan, who is questionable for the match, said the weak performance against Venezuela will not be repeated.

“It will be totally different against Uruguay,” Allan said. “They will come at us and play, which means they could leave more gaps for us to counter.”

Besides missing Valverde, Uruguay will also be without goalkeeper Martín Silva, defender Sebastián Coates and striker Maxi Gómez. Left back Matias Viña has been infected with COVID-19 and will also miss the match.