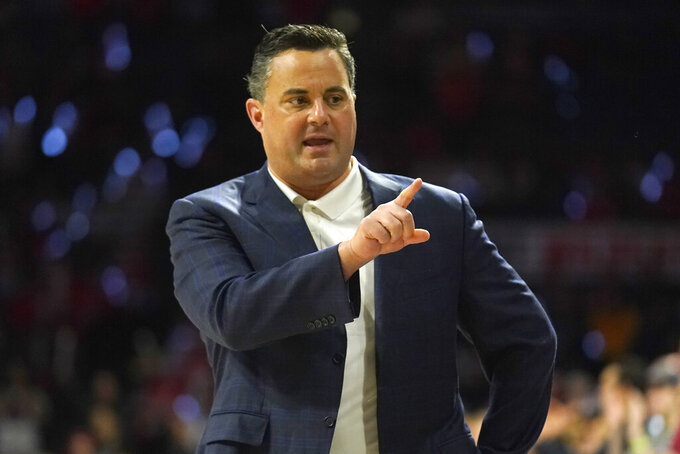 FILE - In this March 5, 2020, file photo, Arizona head coach Sean Miller gestures during the first half of an NCAA college basketball game against Washington State in Tucson, Ariz. Arizona lost three star freshmen who turned pro and its top six scorers from last season. Nico Mannion, Josh Green and Zeke Nnaji may be gone, but Miller has restocked the roster with talented players, six from outside the United States. (AP Photo/Rick Scuteri, File)

Don't expect a down year in the desert.

Nico Mannion, Josh Green and Zeke Nnaji may be gone, but coach Sean Miller has restocked the roster with talented players, six from outside the United States.

“I love the international guys we have, they all come from basketball backgrounds," Miller said. "This class will impact our program’s future in a big, big way.”

Arizona won 21 games last season and was in position to make the NCAA Tournament before it was canceled due to the coronavirus pandemic.

That leaves Jemarl Baker Jr., Ira Lee and Christian Koloko as the only returning players who had significant playing time last season.

Tapping into associate head coach Jack Murphy's overseas recruiting abilities, Miller and the Wildcats will have five players from Europe and one from Canada, along with four-star freshman forward Dalen Terry.

The top-rated player in the group is 6-foot-9 Lithuanian forward Azuolas Tubelis, who signed along with his twin brother, 6-6 Tautvilas.

Batcho is out indefinitely after right knee surgery, but the rest of the international players are expected to have an immediate impact.

The talent will be there, but it may take the inexperienced group time to jell.

“It might be the least-experienced team that I’ve ever coached and we’re trying to keep that in mind as we practice and as we teach our guys to be patient, to make sure that we don’t move at too fast of a pace," Miller said.

Arizona will play the season with a cloud of NCAA allegations hanging over the program.

The Wildcats were charged with nine allegations of misconduct in a notice of allegations, including five Level I violations. The program was hit with lack of institutional control and failure to monitor by the university, and lack of head coach control by Miller.

Arizona has requested the case be heard by the newly created Independent Accountability Resolution Process. Miller refused to comment when asked about the allegations.

Arizona may have 10 newcomers, but three transfers should help in that aspect.

Former Georgetown guard James Akinjo was the Big East freshman of the year in 2018-19 after averaging 13.4 points and 5.2 assists per game.

Jordan Brown, a 6-11 former McDonald's All-American, should give Arizona some heft and skill inside.

Arizona struggled with its 3-point shooting last season (35%) and lost its top four shooters from the arc.

Miller is counting on Baker, who shot 34% last season, to pick up some of the slack at shooting guard after playing both backcourt spots last season.

“He certainly can play the 1, but based on how our team is made up,” Miller said, "I think he’ll be in the game most of the time, if not always, with a point guard. I think that frees him up to get away from running our team and being more of a playmaker and a shooter, but the biggest point is we need him to shoot the ball effectively.”

Arizona scrapped a road game against No. 1 Gonzaga as part of a home-and-home series — the Zags played in Tucson last season — and has opted to play a yet-to-be-announced nonconference schedule all at home due to safety concerns.

The Pac-12 went to a 20-game conference schedule for the first time and Arizona will open at home against Colorado on Dec. 2.