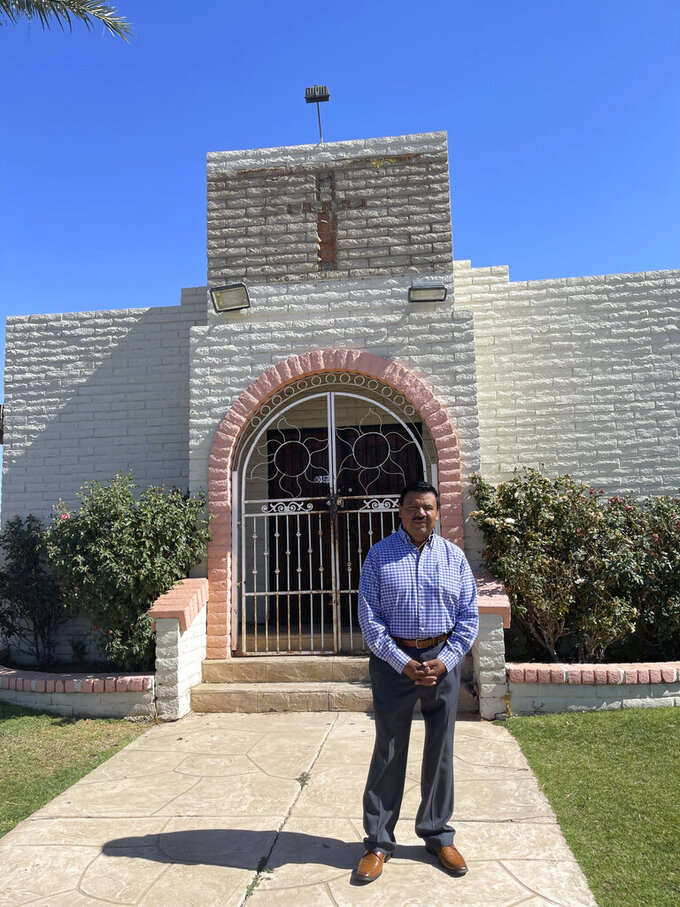 The Rev. Antonio Velazquez, an evangelical pastor originally from Guatemala, poses outside a Phoenix church on Thursday, May 17, 2021, where an effort to inoculate hard-to-reach Central American migrants gets underway on Sunday. The effort announced Thursday, May 27, 2021, comes as Arizona struggles to improve its vaccination rates. Just under half or 45.8% of Arizona's eligible population has been vaccinated. (AP Photo/Anita Snow)

PHOENIX (AP) — A leader in the Central American community in Phoenix says local groups are banding together to ensure more hard-to-reach migrants are vaccinated against COVID-19 as Arizona struggles to improve its inoculation rates.

“I have been very worried about our people because many of them have not wanted to be vaccinated," the Rev. Antonio Velazquez, an evangelical pastor originally from Guatemala, said Thursday.

The push to vaccinate at least 5,000 migrants from Central America and Mexico begins Sunday at a Spanish-language church in central-west Phoenix, Velasquez said.

He said many who will benefit belong to the indigenous Mam and Quiche groups. Velazquez, a Mam speaker who was hospitalized with the virus last year, said he will get his first shot on Sunday as an example to members of the indigenous Maya community.

The 5,000 doses of the Moderna vaccine have already been obtained from Maricopa County Health Department by the Old Town Health clinic, a private internal medicine practice in east Phoenix, said Dr. Vinny Tandon, a doctor of pharmacy who works for the clinic and will help with the vaccinations. Some shots will also be given on the sidelines of soccer games at city parks starting next week, Tandon said.

The nonprofit foundation One Hundred Angels, which provides medical triage to asylum seekers in Arizona's Maricopa County, is also supporting the effort.

“Some of these people may not have an email address or may not want to go to an office, so this is a great way to reach them,” One Hundred Angels founder Cecilia Garcia said.

Just under half or 45.8% of Arizona’s eligible population has been vaccinated. More than 5.8 million vaccine doses have been administered, with over 3.2 million people getting at least one dose. Overall, 2.7 million have gotten both doses.

The only state-run mass vaccination site in Tucson, at the University of Arizona, is preparing to wind down its operation, university officials said Thursday. After the Memorial Day holiday, the site will run 9 a.m. to 3 p.m. Beginning June 7, only second doses will be administered. The clinic will then close permanently June 25 due to the wide availability of shots.

The number of COVID-19 patients hospitalized statewide, however, remains the same at 545. Of those patients, 154 of them are in the ICU.