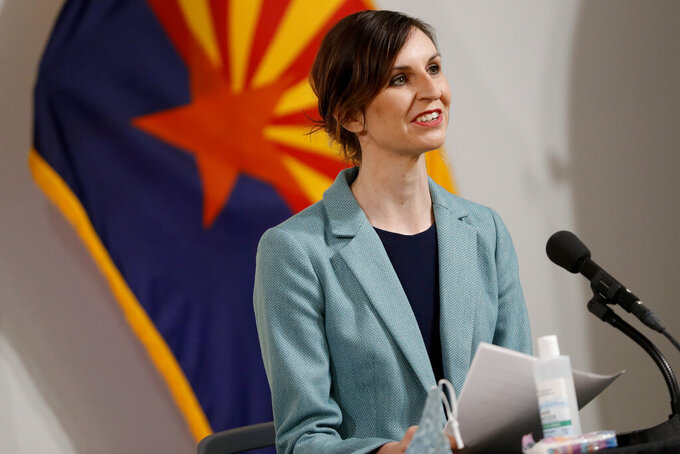 FILE - In this July 23, 2020 file photo Arizona Department of Education Superintendent Kathy Hoffman speaks the latest Arizona coronavirus update during a news conference in Phoenix. Most counties in Arizona, including the state's most populous one, were cleared Thursday, Sept. 3, 2020, to transition their schools to some form of in-person learning after recent coronavirus data showed improvements. Hoffman, however, is urging caution as school districts consider whether to make the switch. Hoffman says COVID-19 can spread so quickly as it did this summer in Arizona. (AP Photo/Matt York, Pool,File)

PHOENIX (AP) — Most counties in Arizona, including the state's most populous one, were cleared Thursday to transition their schools to some form of in-person learning after recent coronavirus data showed improvements.

The state Department of Health Services announced that eight of Arizona's 15 counties now meet the benchmarks required to do a hybrid of remote and in-person instruction if they choose to. They include Maricopa and Pima counties. Meanwhile, Greenlee and La Paz counties, which are more rural, got the green light to switch to full-time, in-person classes.

State Superintendent of Public Instruction Kathy Hoffman, however, urged caution as school districts consider whether to make the switch.

“As we saw at the end of spring and throughout the summer, COVID-19 can spread very quickly when we fail to adhere to essential mitigation strategies like wearing masks and practicing social distancing,” Hoffman said in a statement.

Under an executive order issued by Gov. Doug Ducey in June, there are three key criteria that counties need to fulfill for schools to offer hybrid instruction. A county must have a decline in new cases or a rate of less than 100 new cases per 100,000 people in a two-week period. In that same time frame, a county must also show a test positivity rate below 7% and hospital visits for COVID-19-like illness are below 10%.

It was the first time in three weeks that the Department of Health Services reported over 1,000 additional cases. The agency reported 1,351 on Aug. 13.

Arizona was a national hot spot in June and July, with cases and deaths trending downward since.

—The University of Arizona in Tucson is ramping up testing and monitoring of students. University President Robert Robbins said Thursday the school will increase COVID-19 tests to about 5,000 weekly. The school has also hired unarmed, private security to warn anyone seen violating health and safety guidelines.

“A small number who do not follow the guidelines and adhere to directives can spoil it for everyone,” Robbins said during a news briefing. “It's actually endangering people's lives.”

The university reported Wednesday 126 new positive cases, the highest daily number to date, Robbins said. Since July 31, the school has confirmed 397 cases. The school's designated “isolation dorms” currently contain 54 infected students. Instruction at the school has been remote except for essential lab classes.