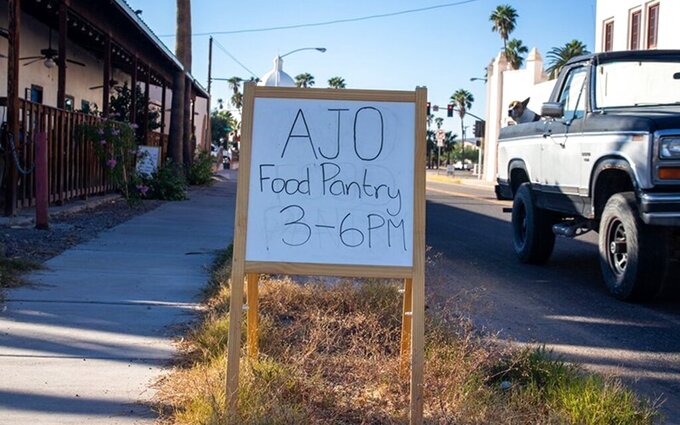 This Oct. 27, 2020 image shows a sign in front of the Ajo Farmers Market & Cafe advertising the Ajo Food Pantry in Ajo, Arizona. The pantry was overwhelmed with demand early in the pandemic. On designated afternoons, people can come by and pick up bags of food for themselves and their family and neighbors. (Katherine Sypher/Cronkite News via AP)

AJO, Ariz. (AP) — On an early autumn morning, the whitewashed churches of Ajo are quiet, and the town square is still. The only sounds are dump trucks rumbling by, headed for border wall construction sites to the south. But inside the Ajo Farmers Market & Cafe, the atmosphere is buzzing.

It’s just after 8 a.m. and the space already is filled with nearly a dozen workers and volunteers. The cafe used to house food incubator businesses, but those left early in the pandemic. Now, every spare surface is covered in food, ready to be given to families in need.

In one corner, a trio of helpers count and bag fruit: four bananas, four oranges, four apples per sack.

“I have a very important job,” volunteer Brenda Mojica says jokingly as she opens plastic bags like an assembly-line worker.

When COVID-19 arrived in Arizona in January, this tiny community was insulated. But by the end of March, the disease had found Ajo, Cronkite News reported.

The town, a two-hour drive southwest of Phoenix, is adjacent to the Tohono O’odham Nation and 40 miles from the U.S.-Mexico border. The copper mine that supported Ajo collapsed in 1985, and the community now is home to about 3,000 people, a mix of Hispanic and Native American, retirees and Border Patrol agents.

As the coronavirus that causes COVID-19 spread, the shelves of Ajo’s lone grocery store emptied out. Local food pantries were overwhelmed.

“The emergency food system collapsed completely,” said Nina Sajovec, a transplant from Slovenia who in 2008 founded the Ajo Center for Sustainable Agriculture.

For years, the organization served as a connection between food and the community by operating the cafe and incubator kitchen, training farmers, and establishing a gardeners’ network and seed-saving program.

With the pandemic, the mission changed: In April, the group transformed the Ajo Farmers Market & Cafe into a de facto food pantry.

Since then, volunteers have distributed food weekly throughout Ajo and seven districts of the Tohono O’odham reservation. In week 1, they supplied 600 boxes containing rice, beans, canned meat and fresh fruit and vegetables. In week 2, they supplied more than 1,400 boxes.

Before the pandemic, the area was already on the brink of destitution: 30% of Ajo residents and 45% of those on the Tohono O’odham reservation lived below the poverty line.

‘A lot of windshield time’

As the day wears on, a yellow Penske truck pulls in behind the cafe. Loaded on pallets inside are 2,000 pounds of mayocoba beans and crates of green, yellow and orange heirloom squash.

The man unloading all this food is Joe Hobson, a former chef who now works with Crooked Sky Farms in Phoenix and helps deliver produce for the Ajo Center for Sustainable Agriculture to distribute.

“There’s a disproportionate availability of nutritious food pretty much everywhere in the United States,” Hobson said, “some communities more than others.”

According to the federal government, there have been no nationwide food shortages during the pandemic. But individual grocery stores have experienced low inventory and, in many cases, food went to waste when some distributors had to quickly shift away from supplying restaurants and school cafeterias that were shuttered because of the coronavirus.

And just because there’s enough food doesn’t mean that everyone has adequate access to it.

The U.S. Department of Agriculture tracks food access in low-income urban and rural census tracts, using measures such as distance to the nearest supermarket and access to a vehicle.

According to data from 2015, most of the Tohono O’odham reservation falls within low-income census tracts where a significant share of its 10,300 residents live more than 20 miles from a grocery store.

In the neighboring census tract that includes Ajo, at least 500 people live farther than 20 miles from the nearest supermarket.

Towns across the Southwest have similar problems.

“In rural states like Arizona, New Mexico, there’s a lot of windshield time between locations,” said Sonya Warwick, spokeswoman for Roadrunner Food Bank, which is based in Albuquerque and Las Cruces, New Mexico, and serves rural communities, including those on the Navajo Nation.

At the start of the pandemic, Roadrunner also struggled to keep up with the demand for nonperishable foods, such as rice, pasta, beans and canned produce.

“What was everybody going out and doing? They were buying shelf-stable products,” Warwick said. “So from a supply-chain issue, it really impacted food availability.”

An analysis by researchers at Northwestern University finds that food insecurity in the U.S. has doubled overall since the pandemic was declared in March, and tripled in households with children.

In Ajo, community groups have been working for years to combat food insecurity, which the USDA defines as a lack of consistent access to enough food for an active, healthy life.

In 2009, the Ajo Regional Food Partnership was created by the Ajo Center for Sustainable Agriculture, the International Sonoran Desert Alliance and others to promote better access to fresh foods and the farming of desert crops.

In 2015, Ajo was one of 26 U.S. communities chosen to be part of the Environmental Protection Agency program Local Food, Local Places, which provides technical support and expertise to help towns leverage food systems to boost economic development.

The Ajo program helped significantly increase food access: the amount of food-producing land went from 10,000 to 40,000 square feet in six years; food production expanded from 1,000 to 8,000 pounds per year; and in 2016, at least 500 local families were involved with growing, selling, processing and/or buying local foods, according to a case study.

Sajovec arrived in Ajo in 2006, intending to stay temporarily while she pursued a doctorate in cultural anthropology. Then she began learning about Native foods and volunteering at a food bank, where she saw the differences between better-off white residents and those in line for aid – many of whom spoke with an accent, as she does.

“Good food is not a privilege – shouldn’t be a privilege,” she said. “It really struck me immediately.”

On the Tohono O’odham reservation, many tribal members are predisposed to such health conditions as obesity and diabetes – chronic conditions that can worsen the effects of COVID-19.

“There’s … a lot of food-related illnesses on the reservation that are attacking our communities,” said Terrol Dew Johnson, an O’odham artist and Center for Sustainable Agriculture board member. “We veered away from eating these traditional healthy foods and started eating a lot of processed fried foods.”

Because of this, the center has for years focused on selling and promoting healthy, culturally appropriate food that is traditional to the Tohono O’odham.

The reservation is the second-largest in Arizona at 2.8 million acres – about the size of the entire state of Connecticut – but it has only two grocery stores, severely limiting access to healthful foods.

And so on this autumn day, as they’ve done nearly every week since taking on the food pantry, volunteers at the Center for Sustainable Agriculture load boxes of food into two white vans bound for the reservation. There, tribal representatives will distribute the food to up to 1,000 families.

Cynthia Sandoval, a Tohono O’odham member who has been helping deliver food, also works at Ajo’s only grocery store, where she’s been employed for nearly 22 years.

Sandoval has seen firsthand the negative effects the pandemic has had on her community.

“There’s a lot of people still that don’t come out of their homes,” she said.

Down the road from the market, tucked behind a small church, is the Center for Sustainable Agriculture’s incubator farm.

Sterling Johnson, a center board member who is Tohono O’odham, tills the dirt with three teenage boys as they prepare to install an irrigation hose. The group works quietly as jets roar overhead, practicing maneuvers from a nearby Air Force training area.

Through its many programs, the center encourages farmers and gardeners to grow foods well-adapted to the desert climate, such as white pomegranates, tepary beans, pumpkins, lettuce, broccoli and kale.

This year has been particularly hard for Johnson and other farmers in southern Arizona. The rain didn’t come as it usually does, and so even the drought-resistant tepary beans didn’t grow.

Still, Johnson hopes the pandemic has made people pay a little more attention to what they eat and where it comes from.

Community and home gardens have seen a surge in popularity during the pandemic. In May, Google searches for “gardening” reached a five-year high.

According to the 2020 National Gardening Survey, some may have taken up gardening once they found themselves homebound with extra time on their hands, while others seized the opportunity to get food consistently and cheaply.

Alicia Tsosie is a program coordinator for the Johns Hopkins Center for American Indian Health, working in Tuba City on the Navajo Nation, where residents often face hours on the road to reach a store.

According to the health center, which is based in Baltimore, food and water insecurity affect 25% to 40% of people living in rural tribal communities, and more than 80% of children rely on getting breakfast and lunch at schools, which have been closed during the pandemic.

“This pandemic has shown people that, unfortunately, we can’t always have access to the grocery store and, even when you do, you’re always going to have that thought in the back of my mind: ‘Am I being exposed to COVID-19? Am I potentially bringing that home to my family?’” said Tsosie, who provides behavioral health education and helps with gardening programs.

“I think it was an ‘aha’ moment for some people.”

‘Everybody was pulling together’

At 3 p.m., a long line forms behind the Ajo Farmers Market & Cafe, trailing up the street as people gather – 6 feet apart – to collect food.

In addition to its distribution efforts, the Center for Sustainable Agriculture started making prepared meals available for pickup or delivery.

“People were losing jobs, everything was closing down,” Sajovec said. “So we were seeing people in line who you would never think they might need food.”

At the end of the day, she said, “people just needed to eat.”

Among those helping to fund these efforts are Pima County, United Way of Tucson and Southern Arizona, Arizona Food Bank Network, local businesses large and small, and private donors.

To date, demand hasn’t slowed. Since early April, the group has distributed more than 20,000 food boxes serving about 2,000 families. In total, they’ve given away over 700,000 pounds of food.

“This is where I think maybe a small community had a different response than bigger cities,” Sajovec said, “because everybody was pulling together.”

In the past few weeks, the Center for Sustainable Agriculture was able to reopen the market’s cafe and shop, so Sajovec and the group’s board members are looking for a permanent location for the food pantry. It will continue operating, she said, as long as there’s need.

The organization also hopes to restart its other agricultural programs, including a youth program and a training program for new farmers. The center is promoting a bill in the Legislature that would provide funding for farming and ranching internships.

“It’s going to be a busy winter,” Sajovec said. “But we’ll keep on growing food and keep on sharing food.”

The way she sees it: “Food means being taken care of.”

After a brief late-afternoon lull, the food line picks up again about 5 p.m., as the people of Ajo get off of work and head home. The center’s volunteers make trips back inside the market to grab more bags of food.

Sajovec stands in the doorway for a moment before heading inside, too. The day is almost over, but it’s not finished yet – because these days, there’s always more work to do.