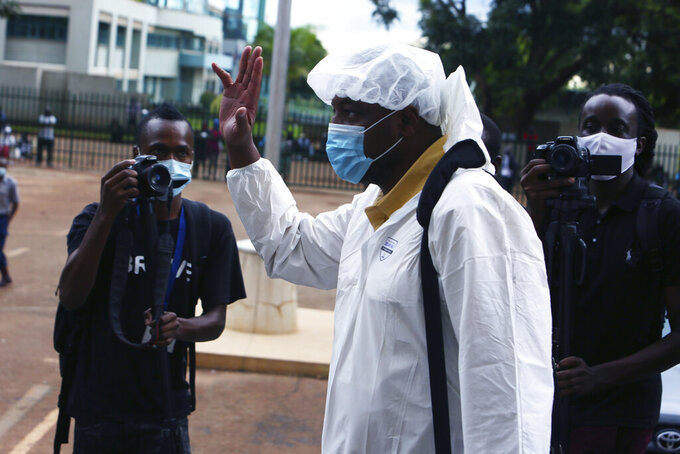 NAIROBI, Kenya (AP) — A prominent Zimbabwean journalist charged with communicating falsehoods has been sent to prison isolation after it emerged that he was likely exposed to people with COVID-19 prior to his arrest.

Zimbabwe police on Friday arrested Hopewell Chin’ono for the third time in five months. The latest arrest comes after he tweeted that police had beaten an infant to death while enforcing COVID-19 lockdown rules this week. Police later said the information was false.

On Saturday, his lawyers argued for his freedom, asserting that his arrest was illegal, but the court could not finish hearing the arguments and remanded him in custody.

His lawyer, Harrison Nkomo, said Chin’ono could have been exposed to people who had since tested positive for COVID-19 during a recent visit to South Africa –- a reason why he should be allowed to stay at home.

The prosecution, on the other hand, argued that his exposure was reason to send him to remand prison “to keep everyone safe” until he undergoes a medical examination.

Magistrate Lazini Ncube ordered that Chin’ono be transported to prison separately from other prisoners, and that he should be kept in isolation while his bid for freedom continues to be heard on Monday.

The magistrate said Chin’ono should be provided with blankets and warm water, conditions that were not available during his previous stints in prison, according to his lawyers.

Before the latest arrest, Chin’ono was out on bail on charges of inciting violence after he voiced support for an anti-government protest in July, and also on contempt of court charges for allegedly claiming corruption within the national prosecution agency.

Chin’ono is one of Zimbabwe’s most prominent critics of President Emmerson Mnangagwa’s administration, accusing it of corruption and human rights abuses. The government denies the charges.

Before he was arrested in July, Chin’ono had published an expose on Twitter in which he alleged corruption involving a $60 million purchase of protective equipment for health workers.

Mnangagwa later fired the health minister, who has been formally charged with corruption. Chin’ono and his backers say he is being targeted for exposing government graft. The government and the ruling party accuse him of being out to tarnish Mnangagwa’s image.