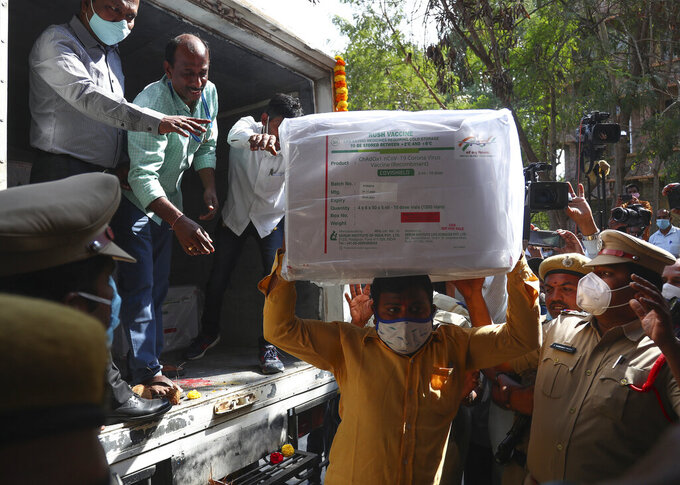 Health workers shift a box containing COVID-19 vaccine from a vehicle to a cold storage at Commissionerate of Health and Family Welfare in Hyderabad, India, Tuesday, Jan. 12, 2021. On Jan. 16 India will start the massive undertaking of inoculating an estimated 30 million doctors, nurses and other front line workers, before attention turns to around 270 million people who are either aged over 50 or have co-morbidities. (AP Photo/Mahesh Kumar A.)

Beginning Saturday, India will start the massive undertaking of inoculating an estimated 30 million doctors, nurses and other front-line workers. The effort will then turn to inoculating around 270 million people who are either older than 50 or have secondary health conditions that raise their risks of dying from COVID-19.

The first vaccine shipments contain the COVISHIELD vaccine made by the Serum Institute and developed by Oxford University and AstraZeneca.

India's drug regulator has also approved for emergency use a homegrown vaccine, Bharat Biotech’s COVAXIN. Medical groups and others have raised concern about the drug being approved with scant evidence of its effectiveness. It’s still unclear when and where COVAXIN will be distributed.

India has the second-most COVID-19 infections in the world, after the U.S. It has confirmed more than 10.4 million cases and over 150,000 deaths.

— The small Pacific nation of Micronesia has reported its first case of the coronavirus after a crewmember on an arriving ship tested positive. In an address to the nation, President David Panuelo said many people had heard the “alarming news” but the case has been contained at the border. Panuelo said one crew member aboard the government ship Chief Mailo had tested positive when the ship returned from the Philippines following more than a year of drydock repairs. He said the crew member has been isolated on board, that all other crew remain on board, and that the ship is being monitored daily by law enforcement. Micronesia, home to 100,000 people, had been among just a few nations to have avoided the virus altogether.

— New Zealand will soon require that travelers from most countries show negative coronavirus tests before they leave for New Zealand. COVID-19 Response Minister Chris Hipkins says New Zealand is in a fortunate position to have stamped out community spread of the virus but takes nothing for granted. The new rules will require travelers to have a negative test within 72 hours of departure. The rules will be imposed on travelers from the U.S. and the U.K. from Friday and most other countries soon after. Travelers from Australia and some Pacific nations will be exempted. In addition to the test requirement, New Zealand will continue to place new arrivals in mandatory two-week quarantine at the border.

— Indonesia has received the raw materials to begin making 15 million doses of Sinovac's COVID-19 vaccine. The materials will be stored at cold temperatures before being sent to state-owned PT Bio Farma in Bandung, West Java, which Health Minister Budi Gunadi Sadikit said will process them within a month. Indonesia’s Food and Drug Authority gave emergency approval to Sinovac's vaccine on Monday. The first two batches of the vaccine, which were fully produced by the Chinese company, will be distributed beginning this week. “The government brought this third batch to add the number of the vaccine that will be distributed to the public,” COVID-19 task force Chief Doni Monardo said. Indonesia has recorded 836,000 cases and 24,000 deaths from COVID-19.

— Malaysia’s king approved a coronavirus emergency that will suspend parliament and halt any bids to call early general election in a political reprieve for embattled Prime Minister Muhyiddin Yassin. Muhyiddin assured citizens in a televised speech that the emergency was “not a military coup and curfew will not be enforced.” He said his civilian government will remain in charge during the emergency, that will last until Aug. 1 or earlier depending on the situation. The emergency declaration came as a surprise just a day after Muhyiddin announced Kuala Lumpur, the administrative capital and five states will return to a near-lockdown to stem the virus spread. Malaysia’s virus cases have spiraled from just over 15,000 three months ago to 138,224, including 555 deaths.

— Lockdowns have been expanded and a major political conference postponed in a province next to Beijing that is the scene of China’s most serious recent COVID-19 outbreak. Residents of the city of Gu’an just south of Beijing have been ordered to stay home for seven days starting from Tuesday. Hebei has also delayed the meetings of the provincial People’s Congress and its advisory body that are usually held in February. Hebei’s provincial health commission on Tuesday reported 40 new confirmed cases, all but one in the provincial capital of Shijiazhuang where transport links have been cut and residents told to stay home.

— A three-day lockdown in Australia’s third-most populous city ended on Tuesday despite authorities discovering a second case of a highly contagious variant of the coronavirus first identified in Britain. The Brisbane lockdown began on Friday evening in a bid to prevent community spread of the variant. It was imposed after a cleaner at a Brisbane hotel for quarantined travelers became infected. Queensland state Chief Health Officer Jeannette Young said on Tuesday that the cleaner’s partner had also tested positive. Despite restrictions easing, masks will remain mandatory in indoor settings and on public transport until Jan. 22.

— Former badminton world No. 1 Saina Nehwal was among four players who tested positive at the Thailand Open, but only she was withdrawn from the tournament in Bangkok. Another Indian, HS Prannoy, an unidentified German and an Egyptian also tested positive on Monday, but their retests were found to be negative. They were to be tested again on Tuesday. Nehwal’s positive test was revealed just hours before her first-round match against Kisona Selvaduray of Malaysia, who received a walkover win. Nehwal was isolated and taken to a hospital. A match involving her roommate and husband, Parupalli Kashyap, was also declared a walkover win to Anthony Ho-Shue of Canada. Kashyap was in isolation along with the entire India team, which was declared high risk by Thai health authorities. Every player will be subject to daily testing at their hotel and can play as long as they keep testing negative, the Badminton World Federation said.