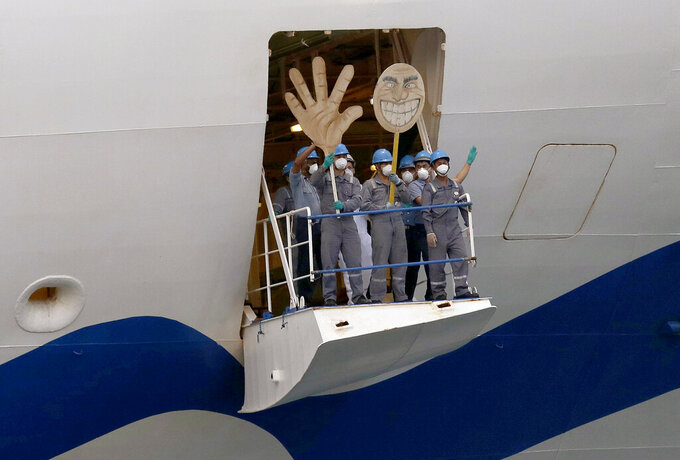 Crew on the the Ruby Princess wave with a cartoon sized hand and head as the ship departs from Port Kembla in Wollongong, Australia, Thursday, April 23, 2020. The ocean liner became notorious as Australia's largest single source of coronavirus infections and is the center of a criminal investigation over the sickness' spread set off a month after it was ordered by police to leave. (AP Photo/Rick Rycroft)

BANGKOK (AP) — Indonesia is suspending passenger flights and rail service as it restricts people in the world’s most populous Muslim nation from traveling to their hometowns during the Islamic holy month of Ramadan because of the coronavirus outbreak.

The transportation ministry’s director general of aviation, Novie Riyanto, said late Thursday the flight ban applies to both domestic and international flights. He said there would be some exceptions, including for leaders of state institutions, representatives of international organizations and the repatriation of Indonesian citizens.

During Ramadan, which begins Friday, faithful Muslims normally fast during the day and then congregate for night prayers and share communal meals.

President Joko Widodo previously banned people from traveling home to celebrate Eid al-Fitr to mark the end of the daily fasting, amid warnings from health experts that Indonesia could face a virus outbreak affecting 1 million people unless it takes stricter measures.

Millions of Indonesians usually cram into trains, ferries, cars and planes during the annual exodus.

Indonesia has reported 7,418 infections, including 635 deaths.

— NORTH KOREA REPORTS NO CASES: North Korea has told the World Health Organization it has tested 740 people for the coronavirus as of April 17 and no one tested positive. Edwin Salvador, WHO’s representative to North Korea, said the Health Ministry has been sharing weekly updates with WHO on its anti-virus efforts. He said WHO is working with the government to bring anti-virus supplies from China. The country’s borders remain closed and all goods are brought in by sea.

— CHINA GIVES MORE TO WHO: China said it will give an additional $30 million to the World Health Organization to help fight the coronavirus, on top of an earlier $20 million contribution. The announcement comes as the U.S., WHO’s main contributor, threatens to cut off funding over criticism the U.N. body has not shown sufficient leadership in the fight against the virus and has uncritically supported China despite allegations Chinese officials initially suppressed news of the outbreak, first detected in Wuhan late last year. China also said Australian calls for an independent investigation into the cause of the pandemic are politically motivated and unhelpful. Australia is among a number of countries calling for more information from Beijing about where the virus originated and whether all efforts were made to stop it from spreading.

— TAIWAN: Taiwan said it is extending restrictions on flights to China and a ban on transit passengers. The self-governing island’s Centers for Disease Control said lifting the restrictions would depend on the status of the disease. Taiwan confirmed two more cases of the virus from a navy refueling ship that recently returned from a training mission to Palau, bringing the total from the ship to 29.

— CRUISE SHIP LEAVES AUSTRALIA: A cruise ship that is the subject of a criminal investigation after it became Australia’s largest single source of coronavirus infections set off from the country’s shores a month after it was ordered by police to leave. The Ruby Princess has been linked to 19 deaths in Australia and two in the United States. A government inquiry is underway into why 2,700 passengers and crew were allowed to disembark in Sydney on March 19 before test results for sick passengers were known. The Ruby Princess delayed its departure because of sick crew members, several of whom have died in Sydney hospitals.

— BANGLADESH REOPENING FACTORIES: Bangladesh is extending a nationwide lockdown by another 10 days, but says manufacturers can slowly reopen factories that produce export goods, including garments. It said the companies must ensure safe conditions for their workers. Bangladesh has the world's second largest garment industry after China. Garment manufacturers say customers have canceled or suspended orders worth $3.17 billion, affecting 2.3 million workers.

— SOUTH KOREA ECONOMY SHRINKS: South Korea said its economy shrank 1.4% during the first three months of the year, the worst contraction since late 2008. The Bank of Korea said domestic consumption fell 6.4% from the previous quarter as people spent less on restaurants, leisure activities, clothing and cars. Exports shrank 2% despite a seasonal rebound in shipments of semiconductors, one of the country’s major export items. South Korea was hard hit by the virus early but a recent slowing of cases has allowed it to relax social distancing guidelines. The country reported eight new infections and two more deaths on Thursday, bringing its totals to 10,702 cases and 240 fatalities.

— VIETNAM TO LOOSEN RESTRICTIONS: Vietnam, which moved quickly to close its borders and trace coronavirus cases, has reported no new cases in several days and is preparing to loosen restrictions. Prime Minister Nguyen Xuan Phuc said “the country will be gradually reopened so people can get back to normal life.” The government has lifted a ban on inter-provincial travel and has allowed an increase in domestic flights. In several provinces, students were going back to school after almost three months. Vietnam has reported no coronavirus deaths.

— US SAYS CHINA TAKING ADVANTAGE OF VIRUS: U.S. Secretary of State Mike Pompeo told his Southeast Asian counterparts on Thursday that China is taking advantage of the world’s preoccupation with the coronavirus pandemic to push its territorial ambitions in the South China Sea. Pompeo made the accusation in a meeting via video to discuss the outbreak with the foreign ministers of the 10-member Association of Southeast Asian Nations. Beijing’s expansive territorial claims in the South China Sea conflict with those of several ASEAN members.