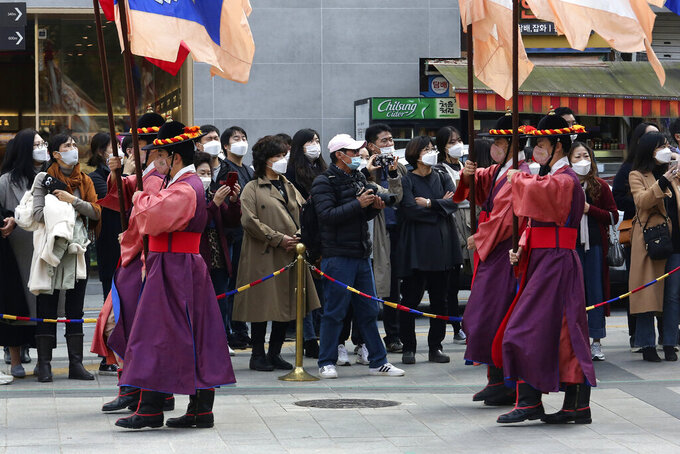 People wearing face masks watch a re-enactment ceremony of the changing of the Royal Guards, in front of the main gate of the Deoksu Palace in Seoul, South Korea, Friday, Nov. 13, 2020. South Korea has reported its biggest daily jump in COVID-19 cases in 70 days as the government began fining people who fail to wear masks in public.(AP Photo/Ahn Young-joon)

SEOUL, South Korea (AP) — South Korea has reported its biggest daily jump in COVID-19 cases in 70 days as the government began fining people who fail to wear masks in public.

The 191 new cases Friday represented the sixth consecutive day above 100 and was the highest daily increase since Sept. 4, when authorities reported 198 new infections.

More than 120 of the cases were from the Seoul metropolitan area, where the coronavirus has spread in hospitals, nursing homes, churches, schools, restaurants and offices.

The continuing spread has alarmed government officials, who have eased social distancing measures to soften the pandemic’s shock on the economy.

While this has allowed high-risk venues like nightclubs and karaoke bears to reopen, Prime Minister Chung Sye-kyun said the spread could force the government to seriously consider tightening social distancing again.

“We are in a precarious situation,” he said, pleading for vigilance and for labor unions and civic groups to cancel planned rallies.

South Korea has so far weathered its outbreak without major lockdowns, relying on an aggressive test-and-quarantine program and relatively widespread use of masks.

On Friday, officials started imposing fines of up to 100,000 won ($90) for people who fail to wear masks in public transport and other venues including hospitals, nursing homes, pharmacies, nightclubs, karaoke bars, religious and sports facilities.

In Seoul, city employees were deployed at subway stations and bus stops to monitor commuters.

— With COVID-19 beds in government-run hospitals nearly full in New Delhi, the local government decided to ask 33 of the capital’s 115 private hospitals to reserve 80% of intensive care beds for coronavirus patients. While India's national totals have held steady recently, the virus is surging in the capital. New Delhi recorded 104 deaths in the past 24 hours, the highest since mid-June, and 7,053 new infections Friday. The Health Ministry reported 44,879 new cases and 547 deaths nationwide. India has counted 8.7 million cases and 128,668 fatalities. The surge in New Delhi has been attributed to people crowding shopping areas and ignoring social distancing norms during the festival season. The key Hindu festival of lights, Diwali, is celebrated Saturday.

— Residents of Mongolia’s capital of Ulaanbaatar have been told to stay at home as part of a nationwide lockdown imposed through Tuesday following the detection of new coronavirus cases. Residents of the city of 1.4 million will be permitted to leave for necessary errands, such as to purchase groceries and medications, the official Montsame news agency reported. Social distancing measures must be maintained at all times when leaving home, and employees of hospitals and other essential facilities must show identification when commuting, the report said. Police and military personnel were being deployed to ensure compliance, it said. Ulannbaatar confirmed two cases of community transmission on Nov. 9 and another in an outlying area on Thursday. Since then, six other relatives or others who came into close contact with those infected have also tested positive for COVID-19. A vast but lightly populated nation landlocked between China and Russia, Mongolia has recorded just over 400 confirmed cases. No deaths from COVID-19 have been reported in Mongolia.

— Japanese Prime Minister Yoshihide Suga raised caution over coronavirus infections, urging officials to step up testing and tracing. The country set a record Friday for new infections, with the health ministry reporting 1,649 new cases, bringing the total to 113,298. Suga said the current situation does not immediately require another state of emergency or scaling down of domestic tourism. He urged people to stick to basic preventive measures such as wearing masks and avoid talking loudly or joining drinking parties that increase the risk of spreading airborne droplets.

— New Zealand’s government could soon make wearing masks mandatory on public transit in Auckland and on planes nationwide as it continues to investigate a new community case of the coronavirus. Virus Response Minister Chris Hipkins says there are no plans to raise the nation’s alert level after genome testing linked the latest case with a military worker who caught the virus at a hotel used as a quarantine site. Hipkins says he will recommend the mask mandate to the Cabinet on Monday for its approval. New Zealand has been largely successful in its efforts to stamp out community spread of the virus.

— China’s government says it has helped more than 70,000 Chinese to return home from 92 foreign countries between the start of the coronavirus pandemic and Nov. 10. Most of the country's cases reported in recent months were imported, and Deputy Foreign Minister Luo Zhaohui said infections detected at ports of entry had risen about 45% since September. Most recently, China suspended five inbound international flights after significant numbers of COVID-19 sufferers were reported among the passengers. About 3,600 total imported cases have been recorded among China’s total of 86,307 cases reported since the coronavirus was first detected late last year in the central Chinese city of Wuhan. Just eight new cases were reported by the National Health Commission on Friday, all of them imported. China has reported a total of 4,634 deaths from COVID-19, a sum that's been largely steady for months.

— Calls are mounting from several Indonesian parties for a postponement of regional elections on Dec. 9 as new coronavirus infections hit a record high. Officials reported 5,444 new cases on Friday, bringing the country's confirmed total to 457,735, the largest number in Southeast Asia and second in Asia to India’s 8.7 million confirmed cases. The elections are to choose nine governors, 37 mayors and 224 district chiefs. Indonesia’s two largest Islamic organizations, Nahdlatul Ulama and Muhammadiyah, have called for a postponement of the polls, joining numerous election watchdogs, activists and health experts who cite health risks. The government believes the elections should go ahead "because no country can predict the end of the pandemic,” presidential spokesman Fadjroel Rachman said Friday. “President Joko Widodo has asserted that the regional elections must be held under strict health protocols to ensure that they are safe and democratic,” he said. Indonesia has reported 15,037 deaths from the coronavirus.