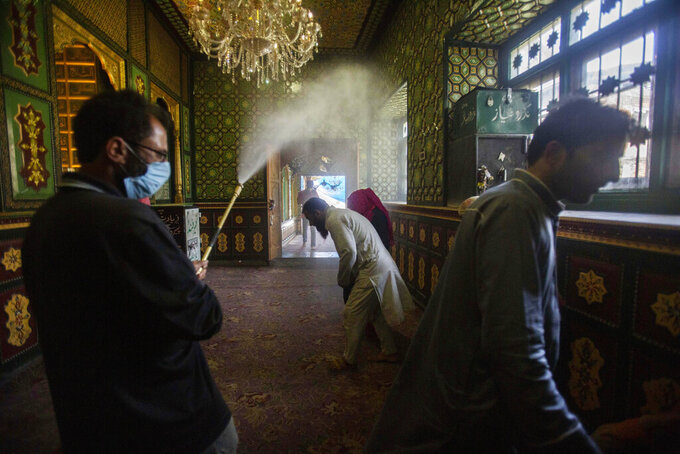 A Kashmiri municipal worker sprays disinfectants as a precautionary measure against coronavirus as a devotee ducks to avoid it inside a Muslim shrine in Srinagar, Indian controlled Kashmir, Sunday, Aug. 16, 2020. Shrines and other religious places across the Jammu and Kashmir reopened for devotees on Sunday after remaining closed for almost five months due to the COVID-19 outbreak. (AP Photo/Mukhtar Khan)

The figures released by the Korea Centers for Disease Control and Prevention Sunday brought the national caseload to 15,318, including 305 deaths.

The number of new cases is the highest since 367 on March 8, when the country was concentrating public health tools and personnel nationwide to bring an outbreak in the less populated southern region under control.

The KCDC said 253 of the new cases came from the Seoul metropolitan area, home to 26 million people, where health authorities have been struggling to stem transmissions linked to churches, nursing homes, schools, restaurants and door-to-door salespeople.

Infections were also reported in other major cities such as Busan and Daegu, which was the epicenter of the previous crisis in late February and March when hundreds of new cases were reported each day.

During a virus meeting, President Moon Jae-in called for “pan-national” efforts to slow the spread of the coronavirus in the capital region. He also instructed officials to review plans for sharing hospital capacities between Seoul and nearby towns to ensure swift transport of patients so that a spike of cases in one area doesn’t overwhelm its hospital system.

Health Minister Park Neung-hoo urged people to stay home on Monday, a special holiday the government had drawn up with hopes of spurring domestic consumption, and for residents in Seoul and nearby Gyeonggi province to avoid visiting other parts of the country for two weeks.

The COVID-19 resurgence in a region with 10 times more people than Daegu is a rude awakening for a country that has been eager to tout its hard-won gains against the virus.

There are concerns that the spread could worsen after thousands of anti-government protesters rallied in Seoul on Saturday despite official pleas to stay home. It appears the protests organized by conservative activist and church groups mainly involved people over 60, who are considered at higher risk for complications linked to COVID-19.

The government is pushing charges against an outspoken conservative pastor who participated in Saturday’s marches along with his followers despite his northern Seoul church being tied to 249 COVID-19 infections as of Sunday afternoon.

Health Ministry official Son Young-rae said the pastor, Jun Kwang-hun, who has frequently led anti-Moon protests in downtown Seoul in past months, disrupted contact tracing efforts by falsely reporting the church’s members and allegedly discouraging followers from getting tested. Health workers have so far tested 800 of the church’s members and plan to test 3,000 more.

— India’s coronavirus fatalities neared 50,000 with 944 new deaths reported in the past 24 hours. India now has the fourth-highest fatalities, behind the United States, Brazil and Mexico, according to Johns Hopkins University data. India’s confirmed cases reached 2.58 million on Sunday with a spike of 63,490. August has seen a big spike in COVID-19 fatalities with more than a quarter of the country’s total in the past 15 days. Meanwhile, India’s recovery rate crossed 70%. Prime Minister Narendra Modi said Saturday that three vaccines are in different phases of testing and mass production will begin as soon as scientists give the green light.

— Australia’s Victoria state on Sunday reported 16 deaths from COVID-19 and 279 new infections, continuing a downward trend over the past week. State Premier Daniel Andrews says the latest deaths included people in their 70s, 80s and 90s, 11 of whom in aged care. Andrews says he feels “cautious optimism” that the strict lockdown in Melbourne, Australia’s second-largest city, and in rural Victoria is flattening the curve. He says the numbers are heading in the right direction. “I am and always was very cautious but there is on my part at least a cautious optimism and a sense of real hope that this strategy is working and that we are seeing numbers fall now."

— Health authorities reported 13 new cases of the coronavirus in New Zealand on Sunday, including 12 linked to an outbreak in the city of Auckland and one returning traveler who was already in quarantine. The outbreak in Auckland, discovered Tuesday, has prompted officials to put the nation’s largest city back into a two-week lockdown. The outbreak has now grown to 49 infections, with authorities saying they believe all the cases are all connected, giving them hope the virus isn’t spreading beyond that cluster. New Zealand had gone 102 days without community spread of the disease before the latest outbreak. Officials believe the virus was reintroduced to New Zealand from abroad but haven’t yet been able to figure out how it happened.

— China reported 19 new cases of COVID-19 in the latest 24-hour period, bringing its official total to 84,827 since the pandemic started. Four cases were in the far west Xinjiang region, where a now-waning outbreak has infected more than 800 people over the past month. The other 15 were people who had arrived from overseas. China has seen a small uptick in such imported cases, reporting 144 in the past week.